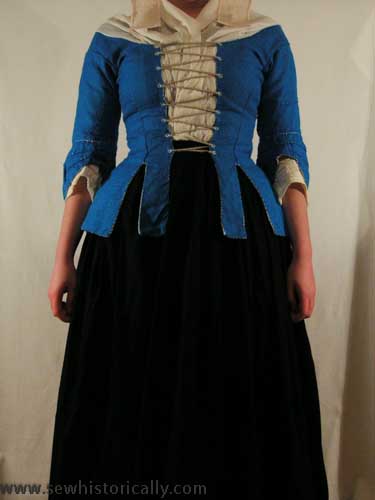 I repurposed the fabric from an 1980s dress – I was thrilled when I tested the fabric and it was linen! 🙂  But it meant I just had a limited amount of this fabric. The colour was also perfect, as linen could have been dyed blue with indigo or woad in the 18th century. I planned to make a lower or middle class working woman’s outfit. At first, I wanted to make a bedgown (manteau de lit) or caraco, but I hadn’t enough fabric. 🙂 So, I made a jacket. Jackets with separate skirts were worn by working class women as they required less fabric (source). The linen jacket is completely handsewn with half bleached linen thread (linen and wool was sewn with linen thread, not silk thread (source)). It’s spiral laced with linen ribbon. Here you’ll see a 1750s spiral front lacing. And in this 1776 painting, the maid’s jacket is also closed in front with spiral lacing. I’ve done some piecing which is suitable for lower or middle class clothing, as fabric was expensive in the 18th century. The jacket is lined with scrap pieces of brown and white cotton fabric (here you’ll see a 1775-85 cotton jacket lined with brown and white linen). To fill the front, the jacket is either worn with a separate stomacher, which is pinned to the stays, or a fichu (kerchief), which I’m wearing in these pictures. Here are women wearing fichus: in this 1720s, and this painting. 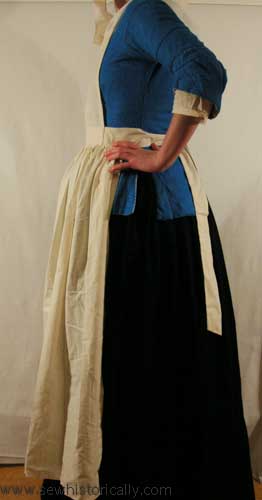