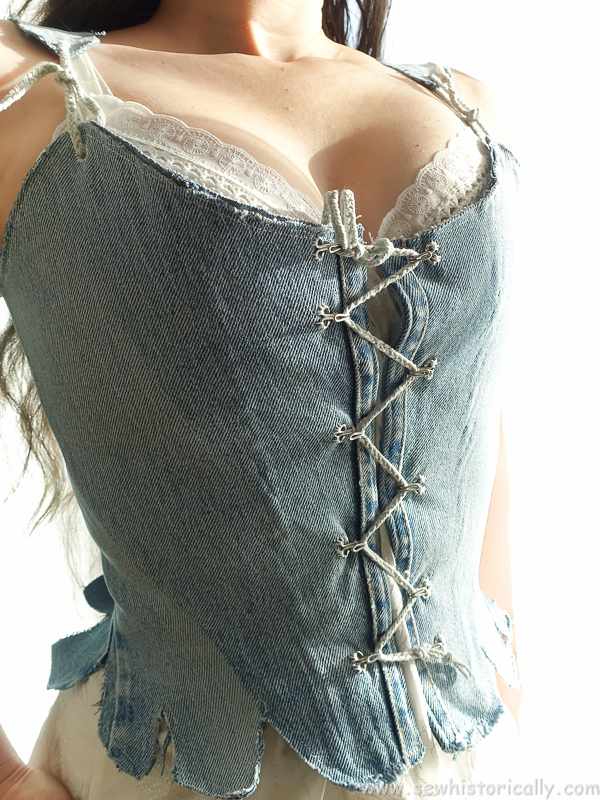 I like to reuse old clothes: One old piece of clothing less in the landfill and a new beautiful denim corset top instead! Double yay! 😀 For these modern 18th century-inspired recycled denim stays I used one of my old jeans. Denim is a strong twill-weave fabric suitable as corset fabric. Because it’s a two-layer corset, it’s already so stiff that I didn’t even had to add boning.

My recycled denim corset has partly historically accurate details – such as the lacing hooks, the hand-sewn eyelets and the naturally dyed lacing cords – and partly modern details – such as the machine seams and the unbound, fraying edges. And by the way, if you’re wondering what’s the difference between stays and corsets: Corsets were called stays in the 18th century. 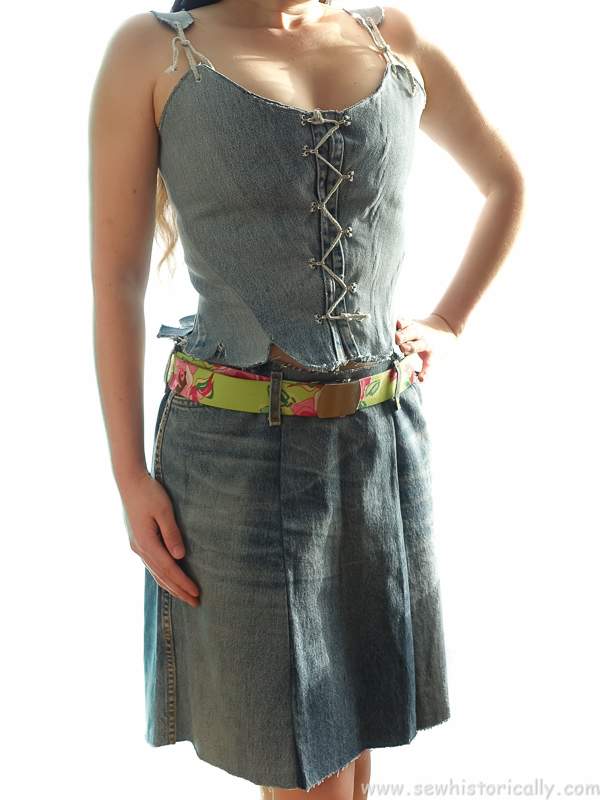 I don’t often wear historical clothing in real life – apart from my Victorian paletot coat that I wear in winter and my Edwardian lace camisoles that I wear as summer tops. But I plan to wear these modern 18th century-inspired recycled denim stays as top without a chemise.

It’s funny that I made another 18th century-style garment even though the 18th century isn’t my favorite historical era – I prefer the 1850s, the Edwardian era and the 1920s. But maybe it helps that the 18th century isn’t my favorite historical era, so I don’t care if the garment isn’t 100% historically accurate or if I wear it differently than it should be worn, such as stays without a chemise underneath! And by the way, denim corset tops, like this 18th century-style denim corset top, are obviously a fashion trend at the moment! 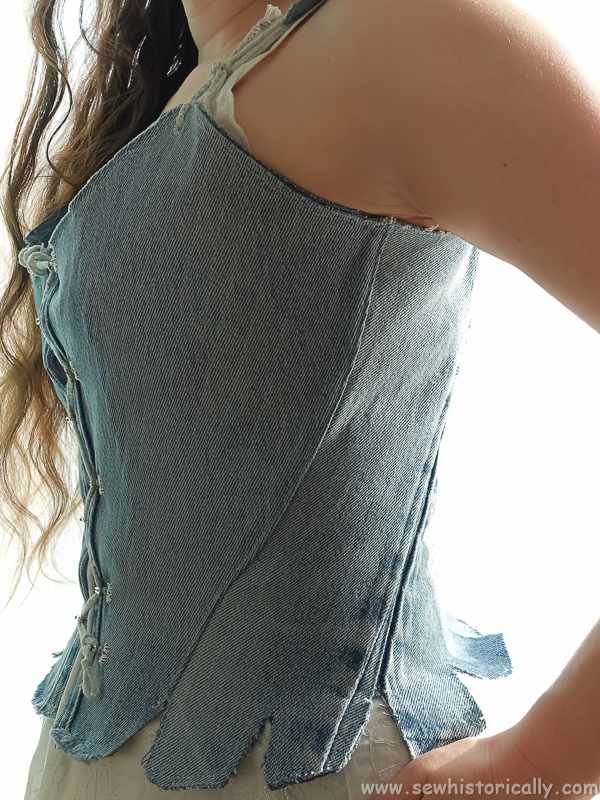 I reused old jeans for my modern 18th century-style stays! The outer layer was a capri jeans that I’d already refashioned a couple of years ago but didn‘t wear anymore. Because they’re old jeans, the fabric is a sturdy, non-stretch twill fabric without elastane. And for the lining I used a piece of denim fabric that was leftover from my DIY denim dog toys. 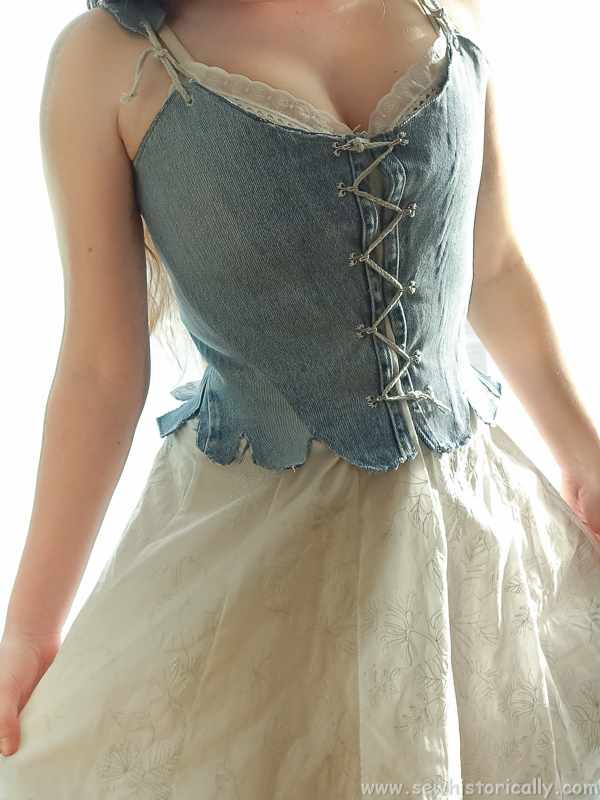 I used the same pattern that I used for my 18th century linen stays. It‘s a combination of the 1750s and 1790s stays pattern in Jill Salen‘s Corset book. I don‘t like making patterns. Therefore I was glad that I‘d already adapted the pattern to my figure! 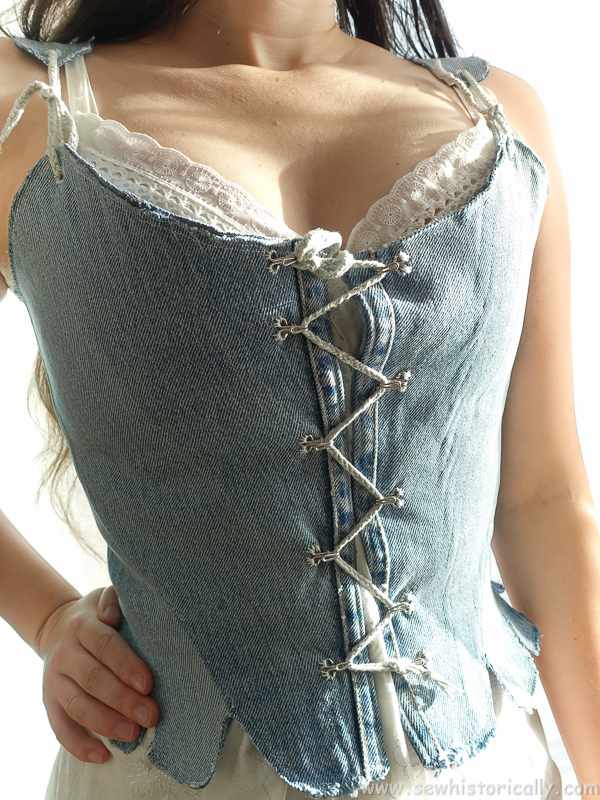 I quilted both fabric layers of my 18th century denim stays together with faux boning channels. I also laid out the pattern pieces so that I could use the seams of the jeans. And both, the seams as well as the quilting, already stiffened the stays enough so that I decided not to use synthetic whalebone like I used for my 18th century linen stays. So these modern stays are unboned like my Victorian working woman black wool stays.

And not all 18th century stays were fully boned: These 1760s blue stays from Spain are only boned at the front. And if I find later that the recycled denim stays bend to much at the front, I can still add a wooden busk or synthetic whalebone boning. 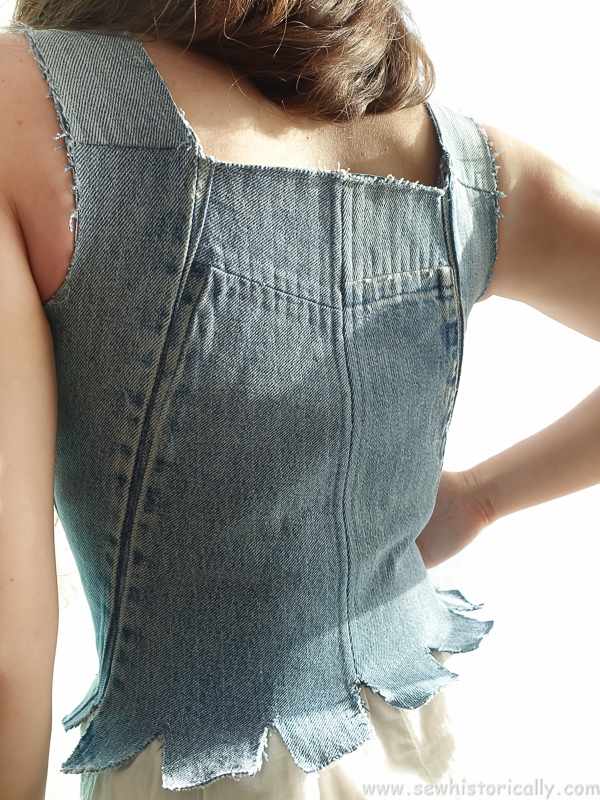 I decided to make the tabs more square this time because round tabs were so difficult to bind. Besides, square tabs are historically accurate: Antique 18th century stays apparently had square tabs more often than round tabs.

But then I liked the look of the fraying raw edges. So I changed my mind and left the edges and tabs as they are. I simply stitched around all edges to prevent further fraying. And if I want I can bind the edges later if I change my mind again! 😉 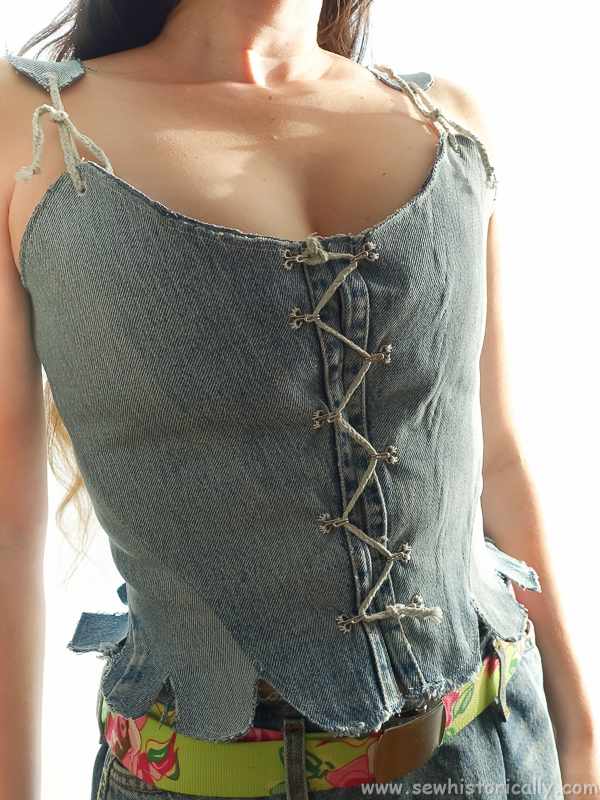 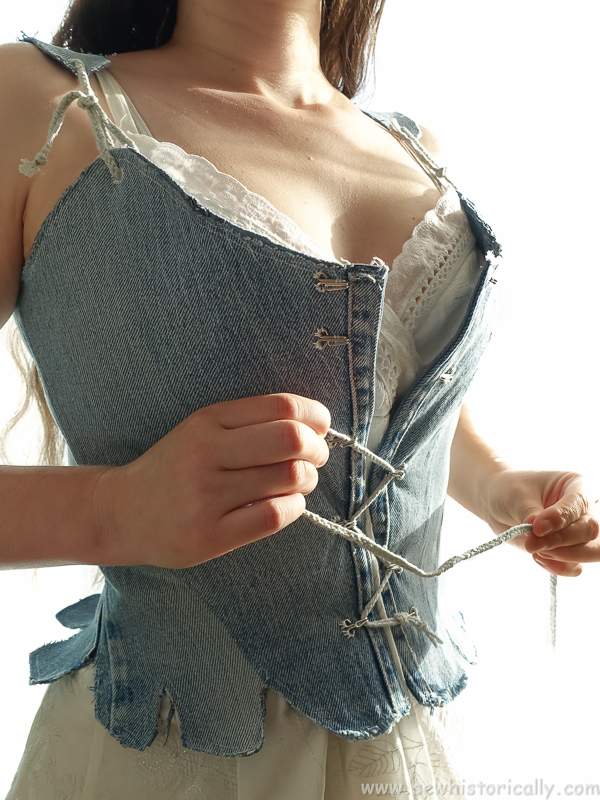 Because my 18th century linen stays take rather long to put on, I decided not to use eyelets this time. I thought about whether I should use a metal zipper, a buckle (similar to Edwardian bathing corsets) or lacing hooks as closure. I finally decided to use lacing hooks. Lacing hooks or dirndl hooks are actually a historically accurate closure for 18th century stays!

For the lacing cords I used cotton yarn that I naturally dyed with red cabbage a couple of years ago. And the yarn is still blue after all these years! 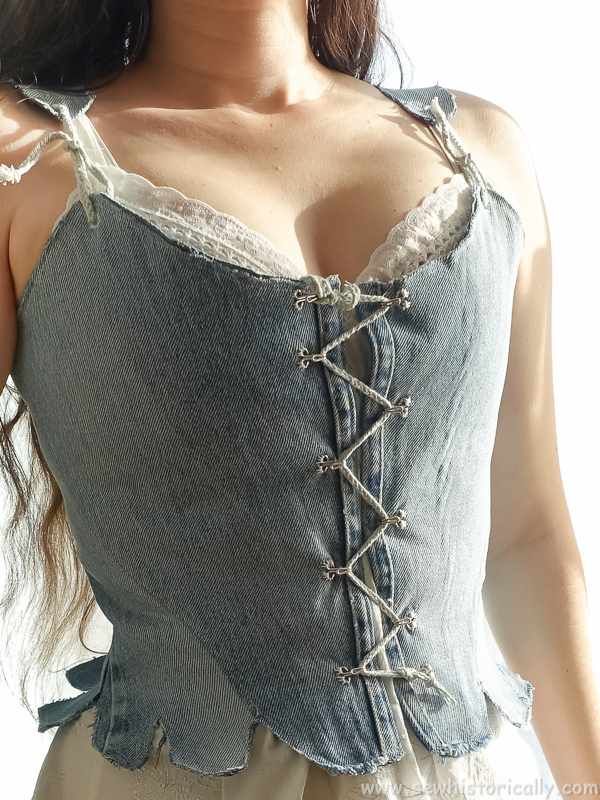 Do you make your own trim or reuse old clothes and leftover fabric scraps for your historical or modern makes? 🙂 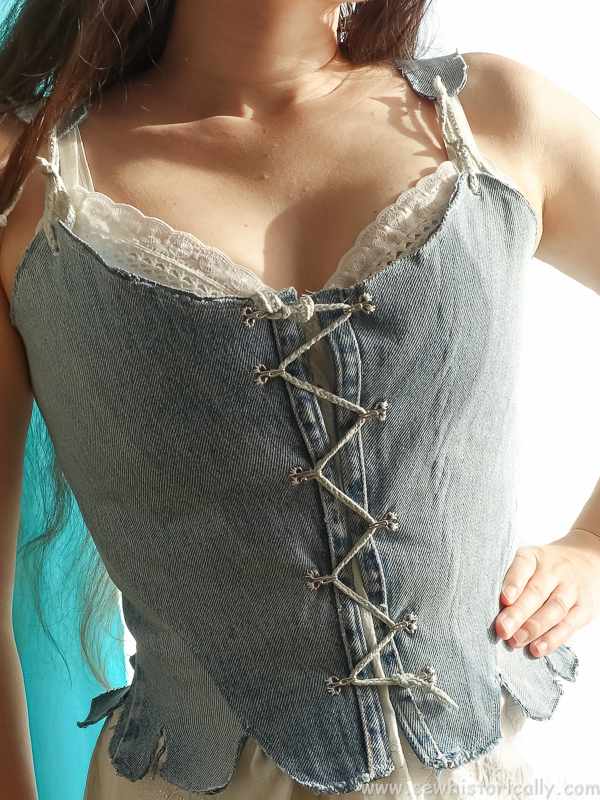