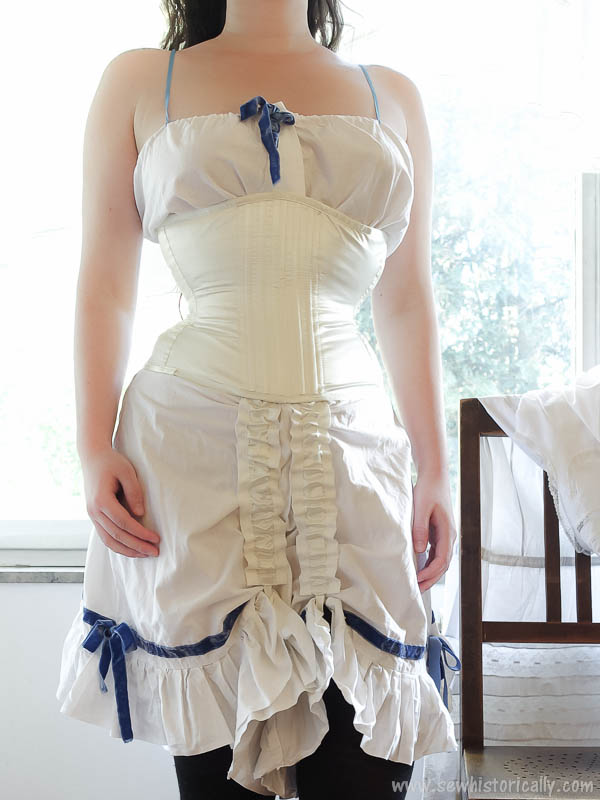 The Edwardian sports corset doesn’t ‘interfere in the many free movements of any of the outdoor games […] and every one will be quick to appreciate the advantages of the newest try in the favor of athletics, comfort and trimness.’ (San Francisco Call, 1903) 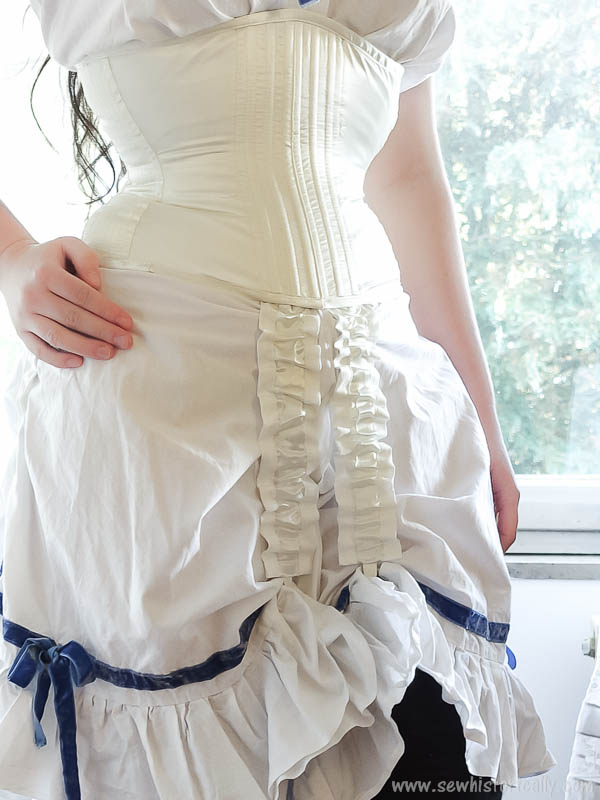 ‘As every girl who loves the outdoor sports knows, corsets and athletics have long been on unfriendly terms with each other. […] the designers of feminine harness have made little or no study of a corset suitable for such exercise, and they certainly have made no effort to combine the straight front with the freedom of movement required in playing golf and tennis. […] the front steels, which are long and stiff, were always jabbing her and giving gentle hints that they were not to be forgotten.’ (San Francisco Call, 1903) 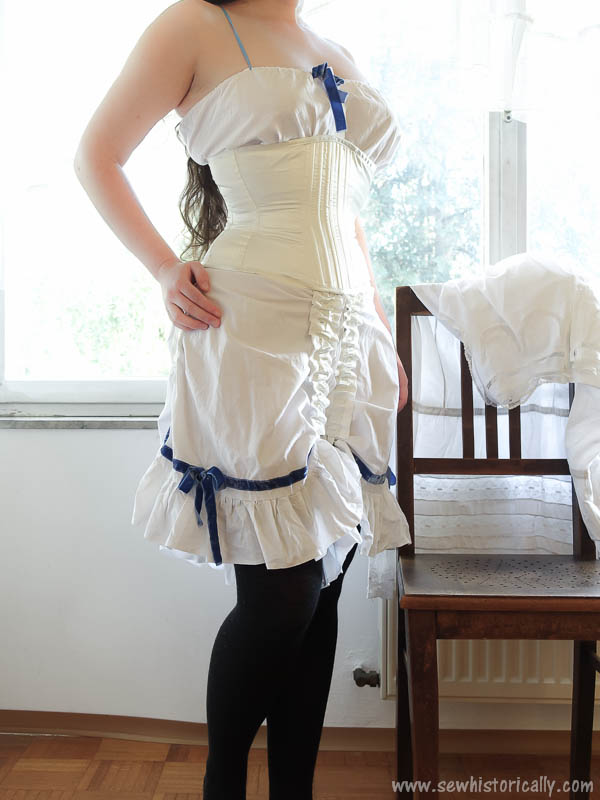 ‘For the very slender girl, who alone can wear one of the fragile things without looking unprotected and undressed, a new and popular cut has just come in. The girdle comes to just a suggestion of a point in front, while the back is cut off square and so straight up and down as to invariably punch the wearer under the shoulder.

At intervals there are strips of cream or white batiste stiffened ever so little with thin bones, and these upright bands are held together by means of narrow ribbons, which run around from the front steels to the back ones. The ribbons are run underneath the batiste and end at the front in a fluffy bow.’ (San Francisco Call, 1903)

I cut up my grandma’s 1950s off-white satin underskirt and reused the fabric for my corset because it’s such a nice, thick satin: much thicker than today’s satin fabrics! Like most corsets, my corset has two layers: satin fabric as outer layer and white cotton twill as inner layer. Twill, called corset jean in the Edwardian era, was a popular corset fabric back then. The fabric looks like denim fabric, only pure white. 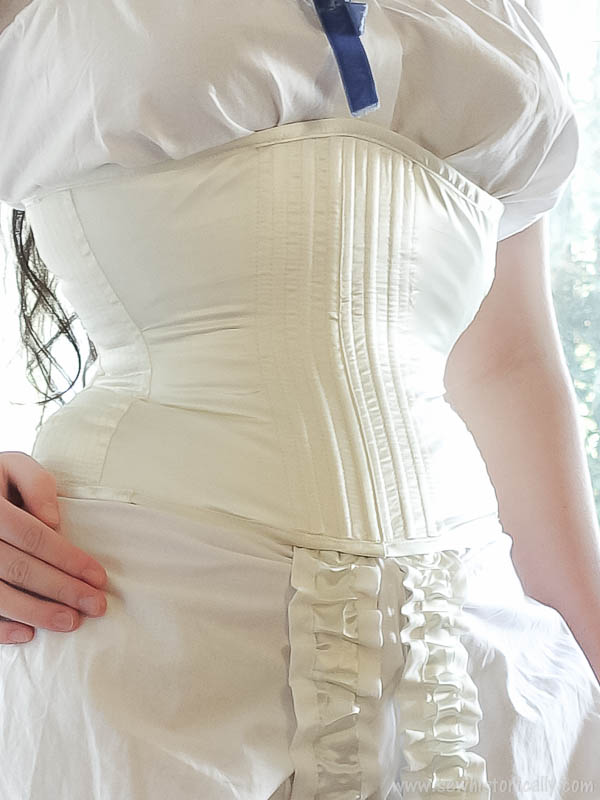 ‘One splendid thing in the new corset is its decided spring in the front, so that the diaphragm and lower ribs have plenty of room for expansion and curve without any confining pressure. The steels down the front are just stiff enough to serve their purpose and from there to the back there is not a sign of a bone or cord, so you can readily imagine how limber and loose they are. It is perfectly comfortable and cozy without being sloppy. […]

You may bend forward, backward or to the side without the least feeling of restraint, yet at the same time be conscious of a pleasing feeling and know within yourself that you are presenting a trig appearance.’ (San Francisco Call, 1903) 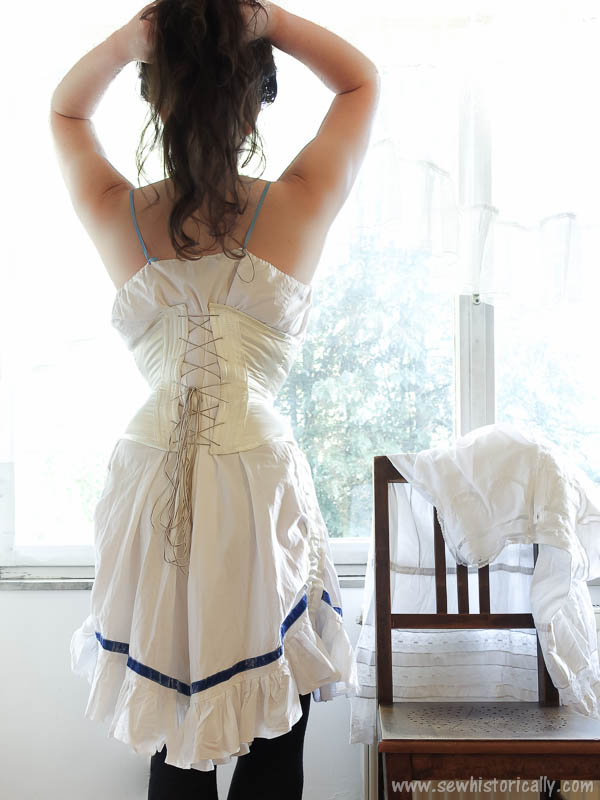 The fourteen eyelets for the laces at the back are all handsewn. And I threaded the corset with white and beige striped, flat, 100% cotton laces.

In the photo above, you can see that the corset has wrinkles at the back and sides. But that’s normal because the corset is only lightly boned: ‘Don’t be afraid that the unboned portion will wrinkle with each movement, for that is really so and it would be strange if it didn’t’ (San Francisco Call, 1903).

‘By the way, garters are as much a feature of the athletic corset as they are of any other kind […] The elastics serve to hold the stays down, and the stockings up and do not in any way add stiffness to the original pliability.’ (San Francisco Call, 1903) 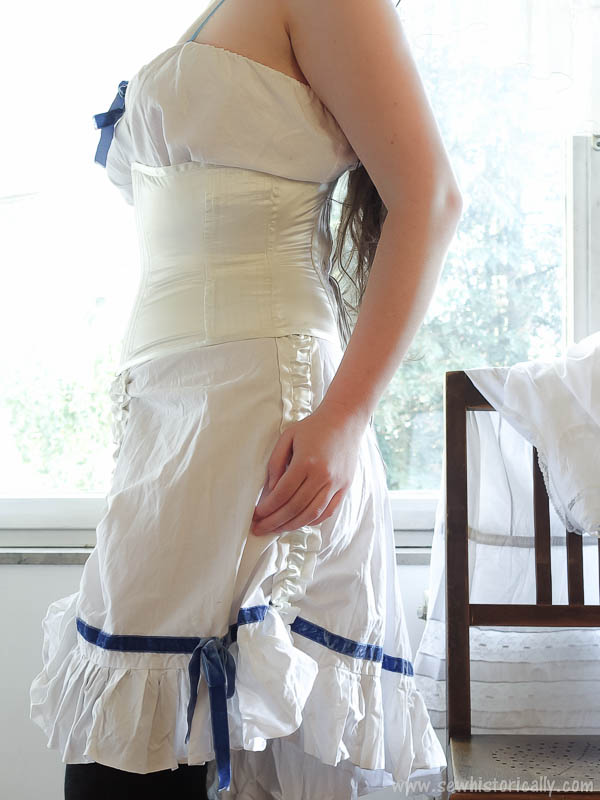 I love how curvy the silhoutte is! However, I’m not laced tightly: My waist is actually 1/2″ (1cm) bigger than my natural waist! Corsets usually don’t reduce the waist measurement but they squeeze the naturally oval waist into a circle so that the waist looks smaller from the front and back (but not from the sides!). 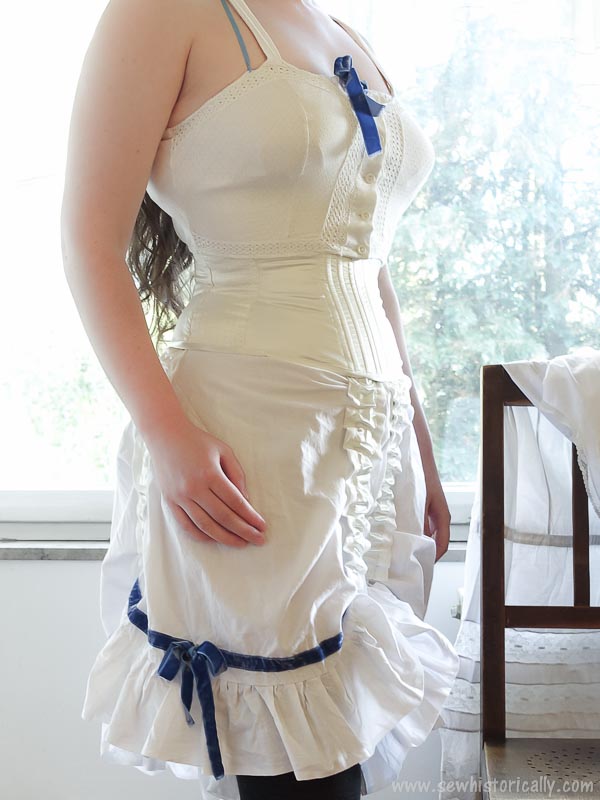 Edwardian corsets were usually straight-front corsets, also know as S-curve corsets. However, ribbon and sports corsets often had a curved waist line, similar to Victorian corsets: ‘One radically new thing about them [athletic corsets] is that they have not the long front straight, as a board, so that the figure looks as thick at the waist as it does at the largest part of the hips. A slight curve is natural, and it is far more lovely than a straight line’ (San Francisco Call, 1903). 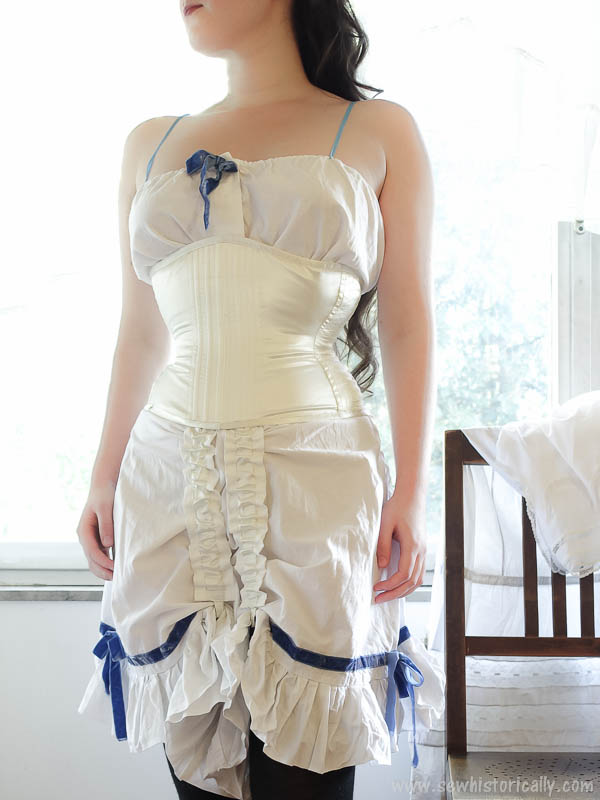