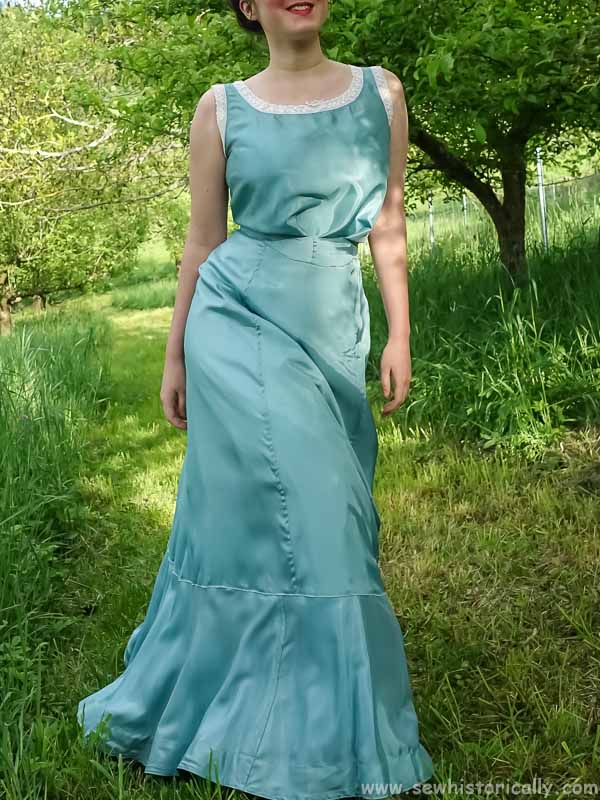 ‘Some of the lining satins make attractive slips which will last a season, and are very inexpensive.’ (Clothing For Women: Selection, Design, Construction, 1916) 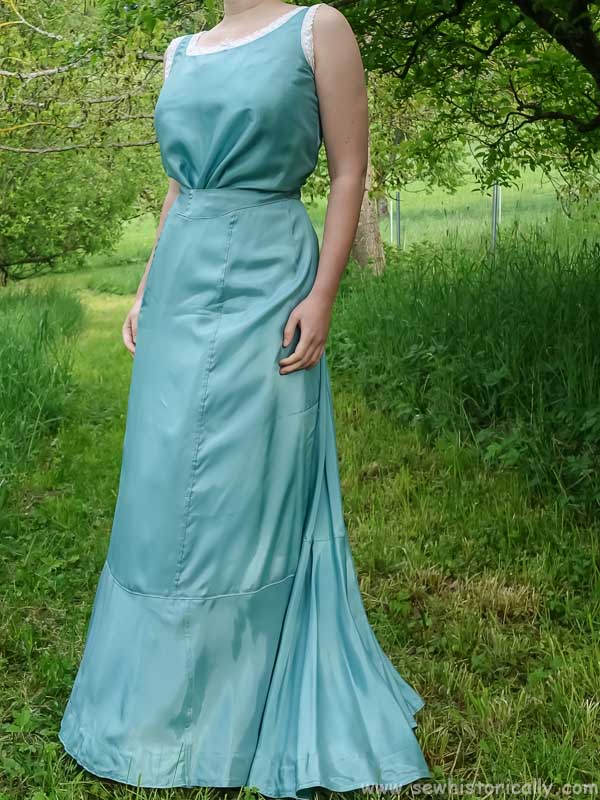 For my petticoat I used the 1901 ‘Skirt Astarté’ pattern – it’s also a free antique sewing pattern. The petticoat is basically a very elegant version of a tailored skirt:

‘The tailored skirt […] is the foundation of all pleated or draped skirts […] The beauty of the tailored skirt lies in the good lines, careful machine stitching, and perfect fit of the garment.’ (School Sewing Based On Home Problems, 1916)

And I like that my petticoat doubles as skirt: Similar silk and artificial silk skirts were worn with elegant lace blouses in the Edwardian era: Here I’m wearing the petticoat as skirt with a lace blouse.

As I mentioned before, this artificial silk lingerie set is part of my Edwardian lingerie dress.

‘Now-a-days the fabrics used in making separate wash waists are so sheer that it is very necessary to wear pretty lingerie under them.’ (School Sewing Based On Home Problems, 1916)

‘Silk is very generally used for petticoats to be worn with […] lingerie or silk afternoon and evening dresses’ (Clothing For Women: Selection, Design, Construction, 1916) ‘If silk is used it is not a stiff, rustling one, but a soft, clinging India or surah to gain the soft, draped effect so much in demand at present.’ (San Francisco Call, 1902)

Slips for Edwardian lingerie dresses were often colored: Popular colors were pink, blue, green and yellow. I used pale green artificial silk fabric – rayon taffeta – which was already used for dresses and underwear in the Edwardian era. And pale green seemed to be a fashionable color in the early Edwardian era:

I’ve already used the fabric for a 1920s afternoon dress. And I had hardly enough fabric left for the petticoat: so I had to piece the skirt together and had to make the flounce shorter and less wide than I would’ve liked! 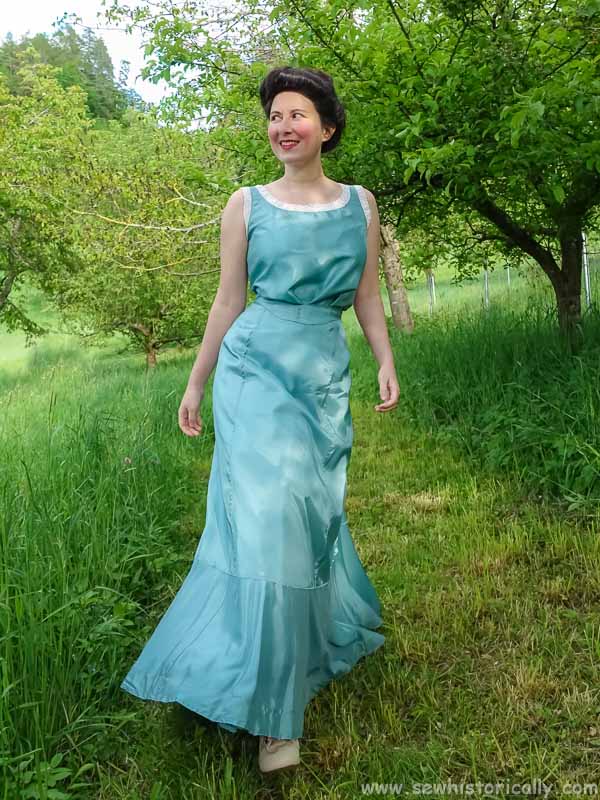 ‘Neck and armhole lines in corset covers’ should match the blouse: ‘A round neck cut as low as may be desirable is usually more pleasing to the eye when seen beneath the waist than is the square or V-shaped line. The latter seem to be continually at variance with the lines of the outer-garment […]

The undergarment must be subordinate to the outer; in other words, serve only as a good background for a pleasing picture.’ (Clothing For Women: Selection, Design, Construction, 1916)

Related: How To Make An Edwardian Lace Yoke 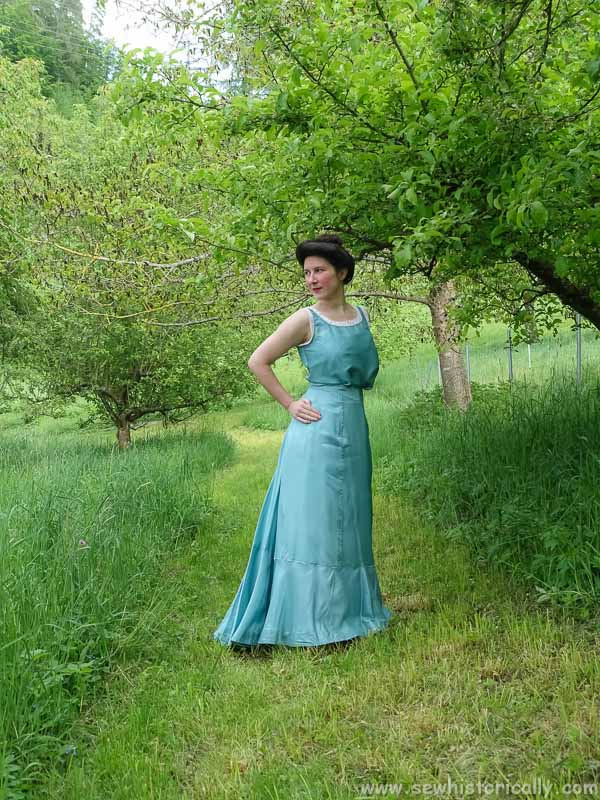 Related: How To Make An Authentic Edwardian Pompadour Hairstyle

While lingerie for Edwardian afternoon lingerie dresses was usually one of the most trimmed Edwardian underwear, I only trimmed the neck and armholes of the corset cover. This, however, is also historically correct:

‘How often one sees a very attractive waist […] beneath which shows a corset cover adorned with […] inexpensive lace of large pattern. Better far to have confined herself to less lace of good quality and recognized pattern, that would in no way irritate the beholder’s sense of the fitness of things.’ (Clothing For Women: Selection, Design, Construction, 1916)

All seams of my Edwardian artificial silk lingerie are finished with flat felled seams. It’s a historically correct seam finish and it’s my favorite seam finish too! Flat felled seams lie flat and drape well unlike French seams that always stiffen the garment!

‘This corset cover may be joined with felled or French seams’. (School Sewing Based On Home Problems, 1916) ‘Finish seams [of foundation skirts] with stitched fell or French seams, preferably the former because they are smooth.’ (Clothing For Women: Selection, Design, Construction, 1916)

‘Make an ordinary seam, and cut off the edge of one side about half its depth; then turn the uncut edge down over the cut edge, fold the two flatly over the seam, and stitch them to position, making the stitching on the outside of the garment. This kind of a seam is extensively used […] for many unlined garments made of silk’ (The Delineator, 1890). 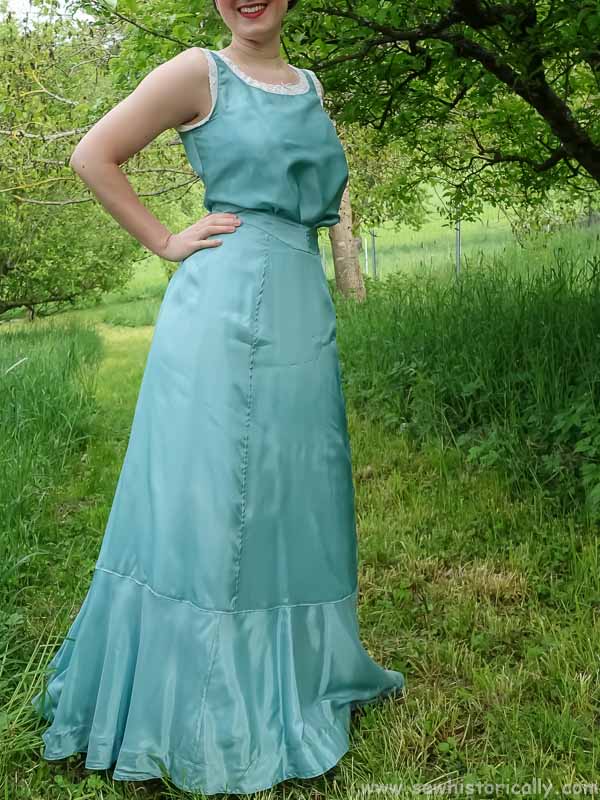 To keep the camisole from riding up, I attached a peplum:

‘It is desirable to attach a peplum to keep the corset cover from slipping up and leaving a gap at the waist line’. (School Sewing Based On Home Problems, 1916)

And to keep the dip-waist petticoat down it has a fitted belt as waistband.

‘The top of a tailored skirt is usually finished so it can be worn outside of a shirt waist.’ (School Sewing Based On Home Problems, 1916)

The petticoat has an extension placket which is closed with two hooks and eyes and two snaps.

‘For a placket opening at the end of an ordinary seam, use the extension placket’. (School Sewing Based On Home Problemsm 1916) ‘Before sewing on the belting […] turn back the ends about 1″, and sew on at least two strong hooks and eyes […] The belting should be hooked around the waist allowing it to open at the same place the skirt is to open.’ (School Sewing Based On Home Problems, 1916)

‘After the belt is adjusted, the skirt should be evened around the bottom’ (School Sewing Based On Home Problems, 1916).

It was so difficult to even out the hem of the petticoat: Because the petticoat is partially a circle skirt, has a short train, and the dust ruffle was not yet attached.

‘An underskirt should be one inch shorter than the outside skirt, as well as narrower, except the flounce. […] The average width of an underskirt on lower edge, before dust ruffle is attached, is between 2 1/2 and 3 yards, for the average person, unless very wide skirts are in vogue.’ (Text-Book On Domestic Art, 1911)

Edwardian skirts and petticoats usually had a facing at the hem to finish the raw edge of the flounce and to stiffen the hem. I used a dark green cotton as fitted facing for the flounce because I hadn’t enough artificial silk fabric left! But it’s historically accurate to use a different fabric for the facing:

The cotton facing also acts as a hem stabilizer and helps to flare out the flounce at the bottom. Edwardian skirts and petticoats were often stabilized with fabric strips, such as this antique Edwardian purple silk petticoat (at the bottom of the page).

My Edwardian petticoat also has both, a circular flounce and a dust ruffle underneath.

‘Skirts may have the lower parts trimmed with flounces, cut circular if of silk, or straight and gathered if of washable stuffs.’ (Clothing For Women: Selection, Design, Construction, 1916)

‘A dust ruffle about 4 inches deep is generally put on to prevent wear, while the flounce, which can be any depth, is added for flaring as well as beauty. […] The dust ruffle and flounce have the same amount of fullness, which is equal to once and a half the distance around the skirt at the line where they are stitched on.’ (Text-Book On Domestic Art, 1911) 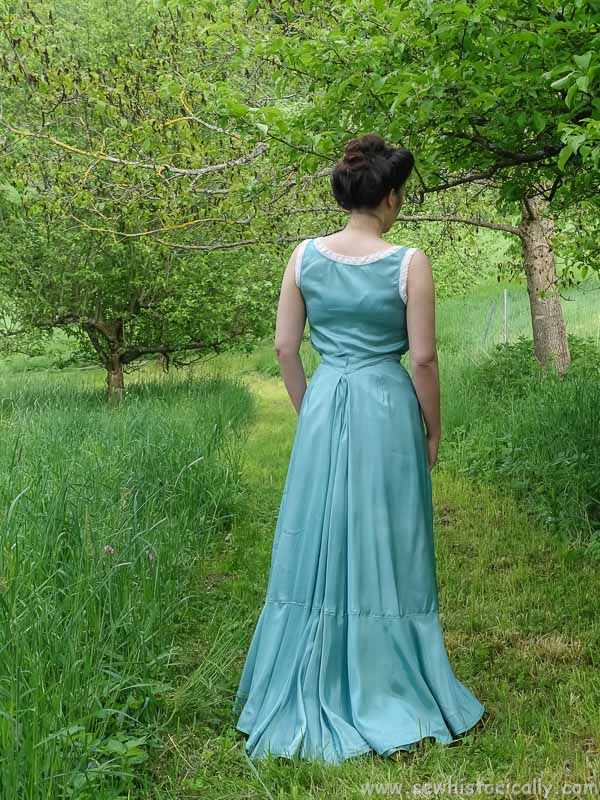 The flounce is joined to the underskirt with a fake tuck, called receiving tuck in the Edwardian era.

‘An underskirt with a flounce should have the flounce set on the skirt with beading or a tuck or a felled seam.’ (A Manual Of Home-Making, 1919) ‘Receiving Tuck: This is one of the most satisfactory finishes for ruffles and flounces, making them seem to be a part of the material itself.’ (Clothing For Women: Selection, Design, Construction, 1916) 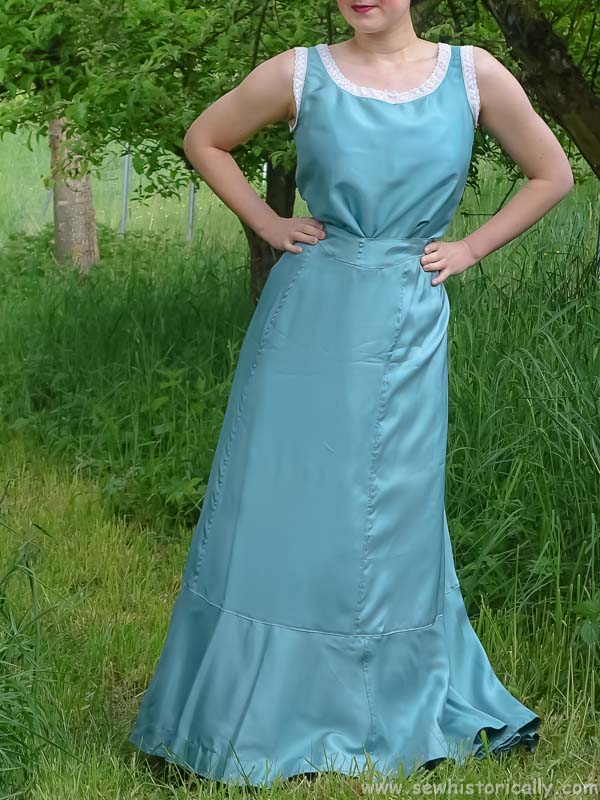