Edwardian women often wore combination underwear instead of a separate chemise and drawers to reduce the bulk at the waist. 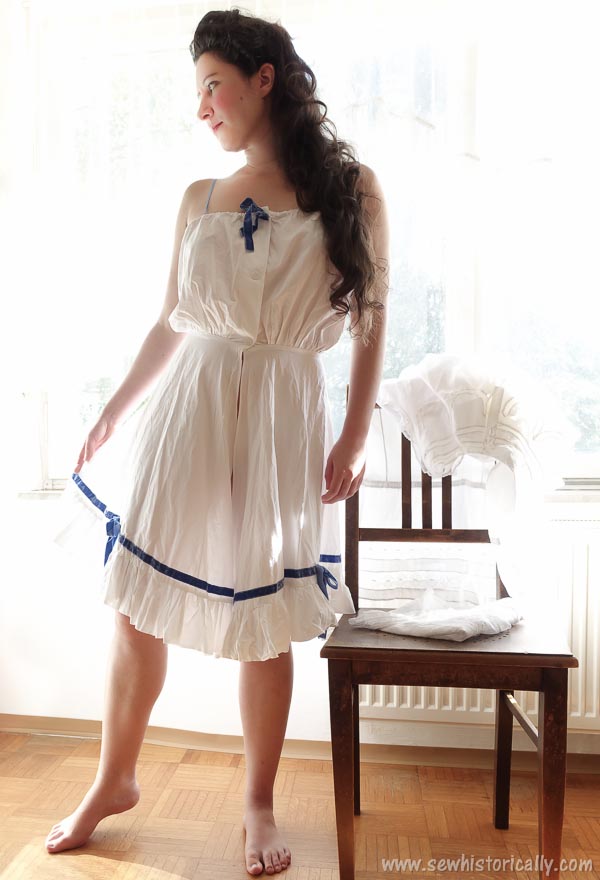 ‘Combination garments are extremely popular […] corset cover and drawers in one, a most comfortable and graceful garment […] is planned to do away with the separate short skirt, thus avoiding any bunchiness about the hips.’ (Los Angeles Herald, 1907) 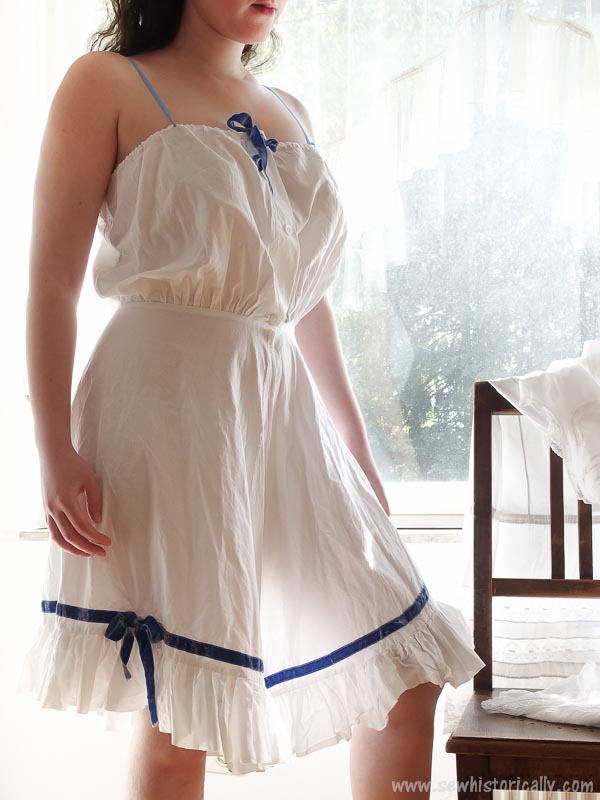 Over Or Under The Corset?

Usually the Edwardian combination suit was worn under the corset instead of a chemise (or slip) and drawers.

However, sometimes a chemise was worn under the corset, and the combination suit over the corset instead of a corset cover or princess petticoat, like in this 1905 photo. ‘The fashionably dressed woman wears but three garments, beside her corset – a little chemise […] a combination corset cover and drawer, and a petticoat.’ (Sacramento Union, 1911)

In the Edwardian era, there was a similar garment which combined the chemise and drawers in one, called envelope chemise. Chemise-drawers combination suits had an open crotch, like mine, whereas envelope chemises had a buttoned flap instead: ‘It is a garment cut on chemise lines, with an extension at the lower edge of the back, buttoning over on to the front, to form the leg of the drawers.’ (Clothing For Women: Selection, Design, Construction, 1916) Here‘s a 1911 pattern of an envelope chemise, and here‘s a woman wearing an Edwardian envelope chemise.

Other Types Of Edwardian Combinations

‘Combination corset cover and drawers, or corset cover and skirt, may be cut separately and joined at the waist line by plain band or ribbon beading, or cut on Princess lines, fitting the upper garment in to the figure.’ (Clothing For Women: Selection, Design, Construction, 1916) 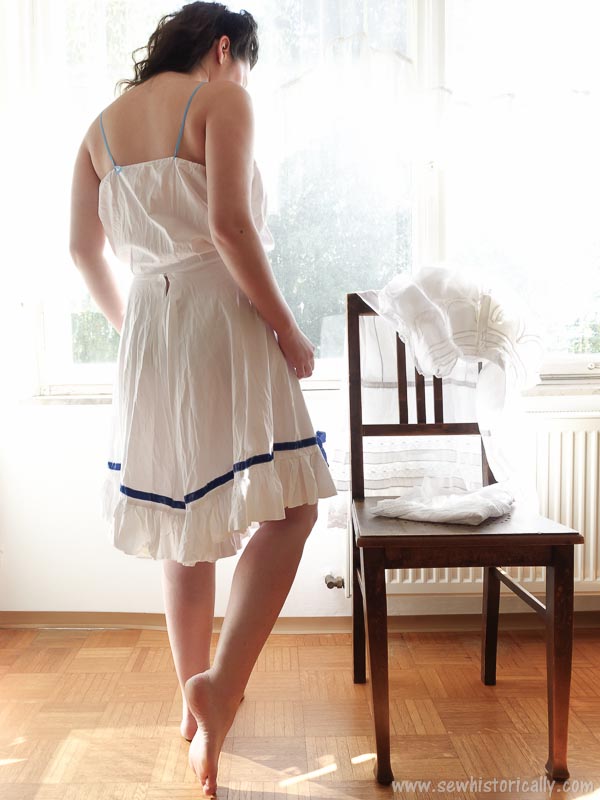 The combination suit ‘takes the place of corset cover and drawers; is very comfortable, not difficult to make, and easy to launder.’ (Clothing For Women: Selection, Design, Construction, 1916)

Combination garments were also advertised as suitable for travel.

‘If you are going to stay three weeks or a month, or even a few days for that matter, you must commence your paring down in dainty, frilly lingerie. All the ruffles take up needed space and if you have ever tried to have them laundried in a city that was full to overflowing, you know something of the heavy expense and the decided annoyance that is always such a part of it. […]

Comination suits of thin cotton […] may not be pretty, but they are inexpensive, occupy but little space and cost but then cents fo wash.’ (San Francisco Call, 1904) 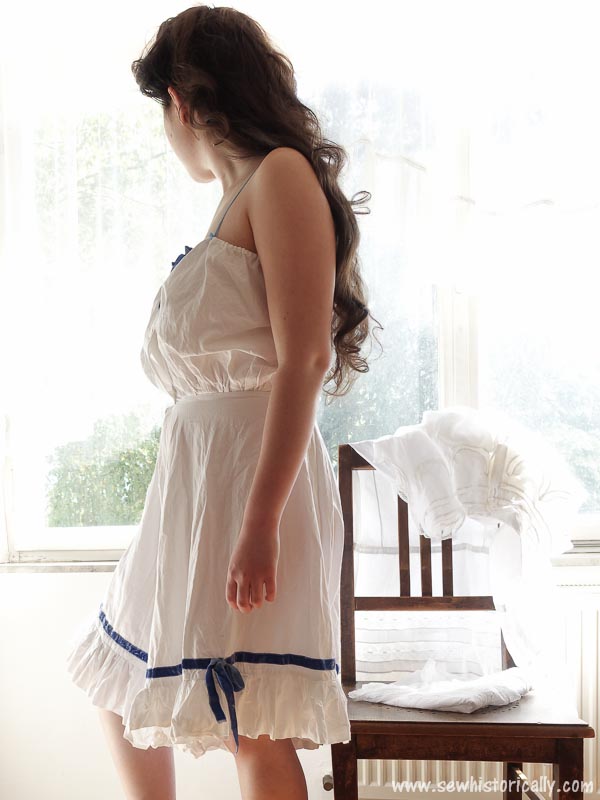 This beautiful Edwardian lace combination was actually my inspiration! However, my Edwardian combination is just a very plain everyday version! 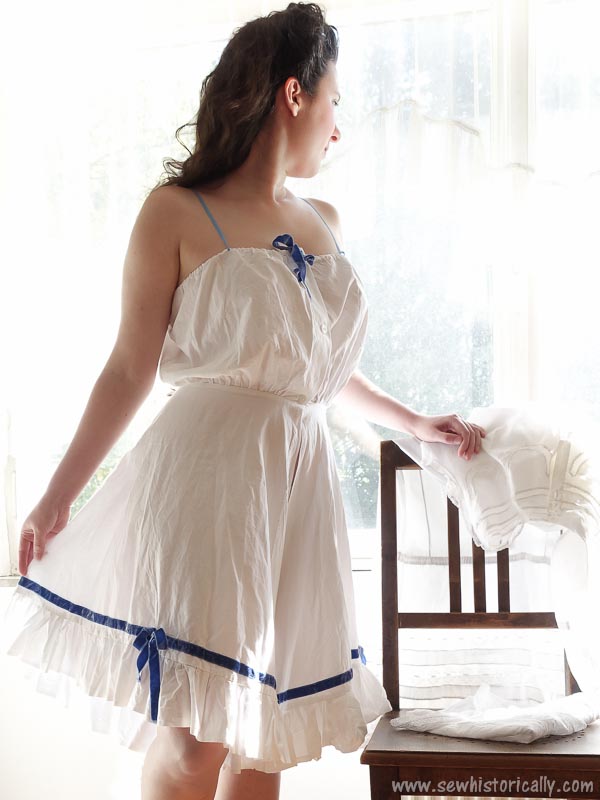 My Edwardian combination suit has circular drawers, also called French drawers in the Edwardian era. Circular drawers have very wide legs, not fitted into a band at the knee: ‘In the days of full skirts the wide, circular ones are very popular, while in the days of tight skirts they are narrowed down and even fastened into a band of some sort at the knees to make them fit closely.’ (School Sewing Based On Home Problems, 1916)

‘Combination garments are very popular […] A corset cover and drawers joined together under a strip of beading, and buttoning down the front, is […] comfortable and graceful. These drawers are cut circular, and extremely wide about the bottoms, so that they also serve as a short petticoat.’ (Los Angeles Herald, 1907)

‘Circular drawers have curved lower edges and are cut circular at the top so that all fulness is removed at the waist line. They are very comfortable to wear, because of lack of fulness at the top, yet permitting freedom of movement.’ (Clothing For Women: Selection, Design, Construction, 1916) 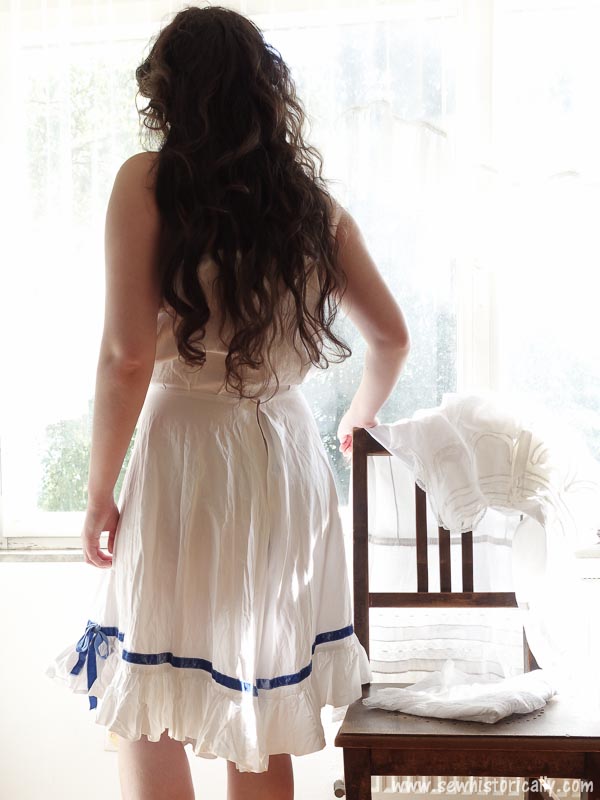 Pleat At The Back

Related: My Edwardian Wool Skirt With Back Pleat 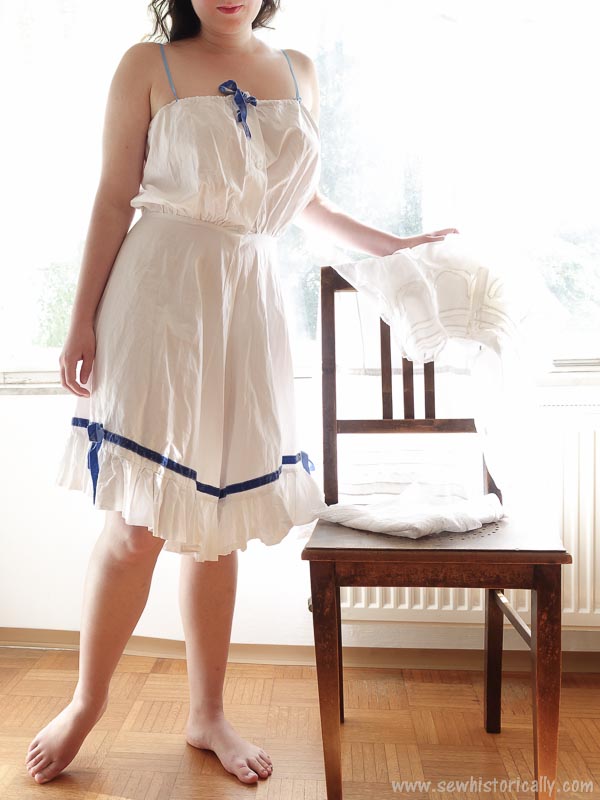 The blue velvet ribbon is not a historically accurate Edwardian lingerie trimming. I didn’t know much about suitable Edwardian underwear trimming back then. A blue silk ribbon threaded through eyelet lace, handstitched eyelets or Valenciennes lace would have been much more suitable!