Some years ago, I made two simple Edwardian petticoats. Called plain petticoats in the Edwardian era, they were intended for everyday wear. 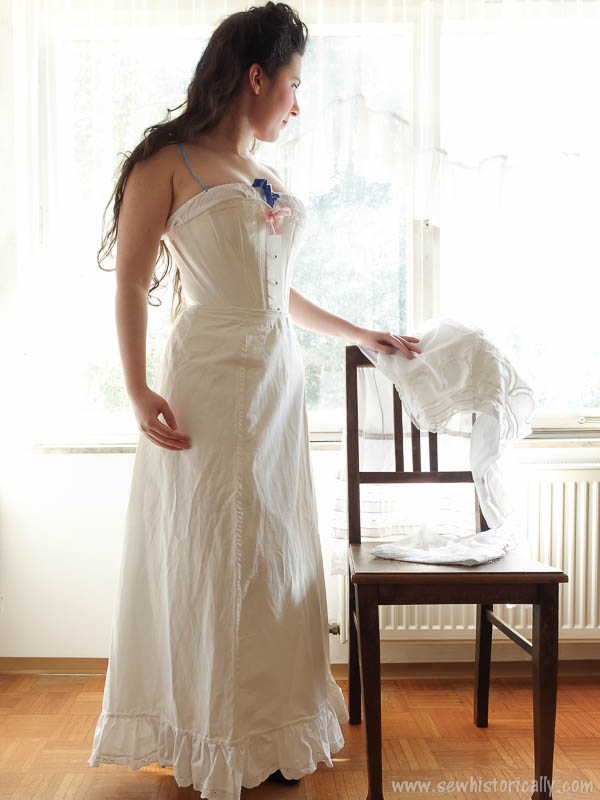 When you think of Edwardian lingerie, you probably think of sheer, white cotton petticoats trimmed with rows and rows of lace. But there were also plain everyday petticoats. Edwardian petticoats for everyday wear were often made with sturdy, white cotton fabric, a simple cotton ruffle forming the only trimming.

‘Petticoats are not so elaborate as formerly’. (The Delineator, 1902) ‘Plain petticoats are necessary for everyday wear’. (School Sewing Based On Home Problems, 1906) 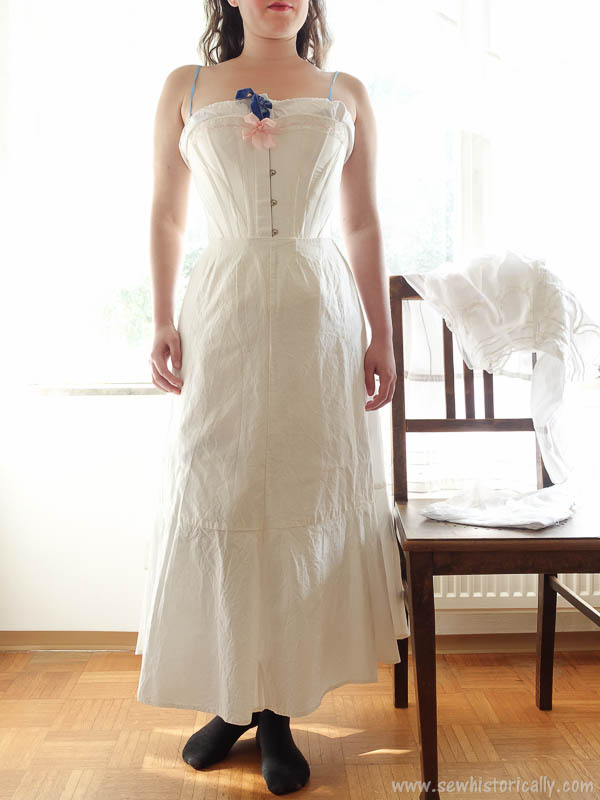 ‘The material used in the under skirt depends upon the purpose for which it is to be used.’ (School Sewing Based On Home Problems, 1906)

‘Cotton petticoats for every-day wear under linen or cotton skirts should be flat in finish, so as not to spoil the “set” of the outer skirt. Keep ruffles and fluffiness for the petticoat to be worn under soft silk and lingerie dresses, unless the outer skirts are very wide. […] Flounces, however attractive, may be made veritable dust-traps, which is contrary to good sense.’ (Clothing For Women: Selection, Design, Construction, 1916) 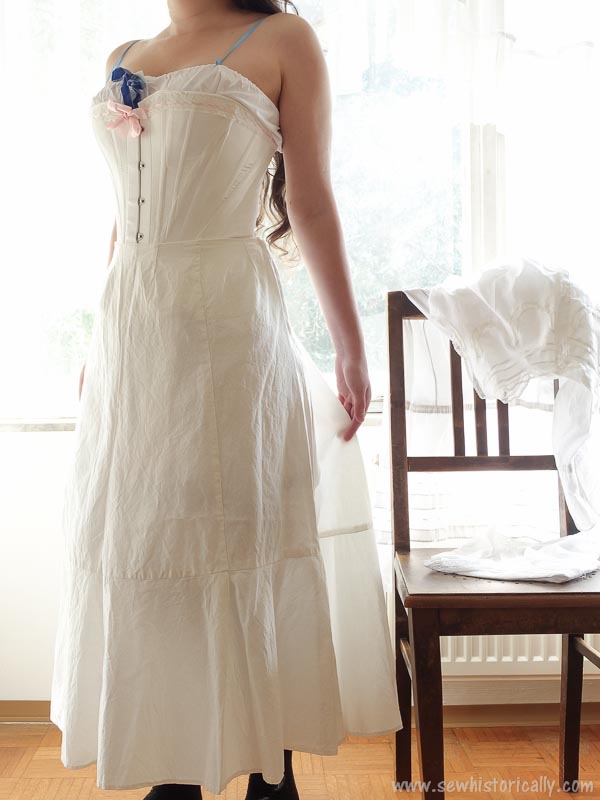 ‘You may use a three-piece skirt’ pattern (School Sewing Based On Home Problems, 1906). Edwardian petticoats were usually made with three pattern pieces: the front, the back and the flounce or ruffle.  While some Edwardian petticoats also had an additional top ruffle or dust ruffle (under ruffle) at the hem. 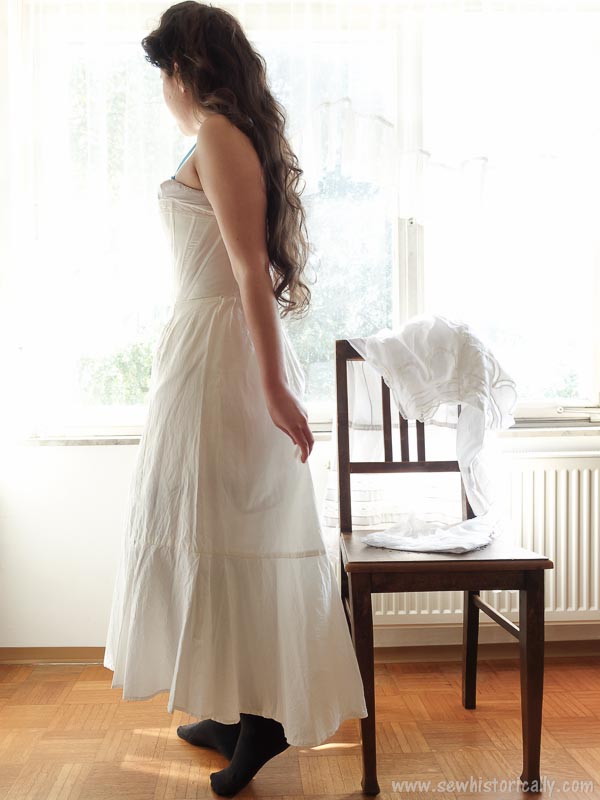 One of my Edwardian petticoats is short, the other long. In the pictures, I’m wearing the short petticoat under the long petticoat. 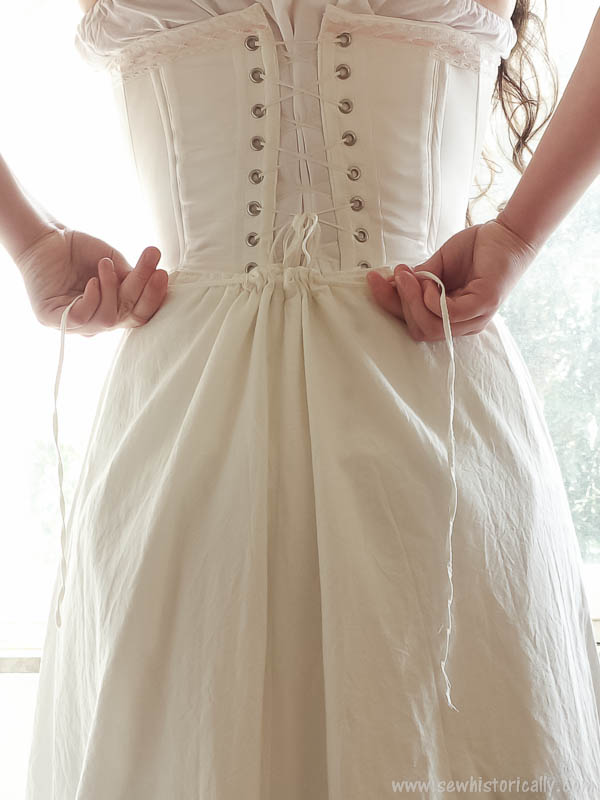 However, before the drawstring casing was stitched down, the top of the petticoat was fitted with gores to ensure a good fit at the hips. 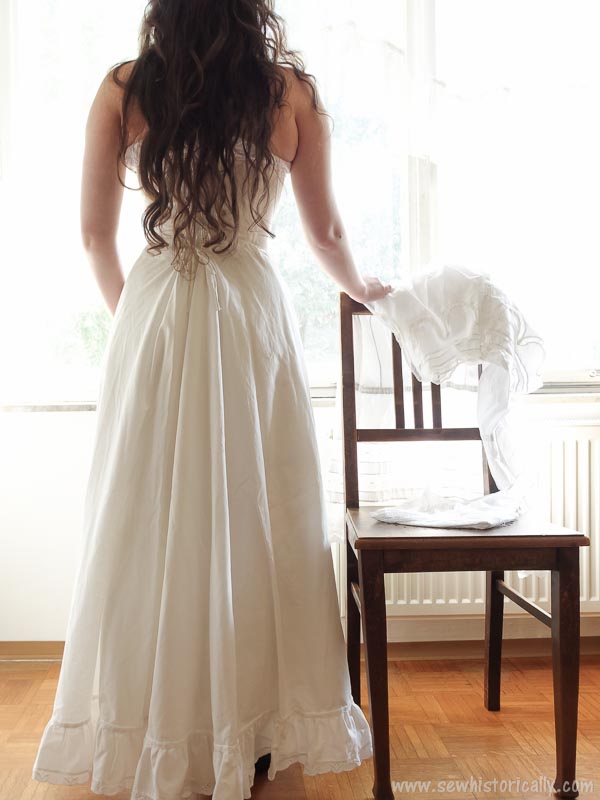 I finished all the seams with felled seams. ‘Felled seams should be used to join the seams of this skirt.’ (School Sewing Based On Home Problems, 1906)

The felled seam is my favorite seam finish: It’s a strong seam, and it’s easier to sew and easier to iron than the popular French seam!

‘The felled seam is used any place where a flat seam is desired. It is particularly desirable in under garments, like drawers and combination suits. Any garment which is worn next to the skin should be finished with this seam.’ (School Sewing Based On Home Problems, 1916)

‘If one learns to make an even, felled seam it is the prettiest to use on undergarments. […] To make a felled seam, the two edges of a seam are put together on the wrong side, so that one edge is a good eighth of an inch below the other. The first stitching is done close to the edge of the lower one, and then the material is creased from the right side so that the seam lies flat, then the broad edge is turned in and hemmed down by hand, or put in the feller and done on the machine.’ (San Francisco Call, 1908)

I trimmed one of the Edwardian petticoats with a ruffle.

‘The trimming […] consists simply of the ruffle at the hem which add the required weight at the bottom’. (Los Angeles Herald, 1908)

In the Edwardian era, ruffles and flounces were usually attached with a “receiving tuck”. Here‘s a picture of how to attach a ruffle with a receiving tuck. 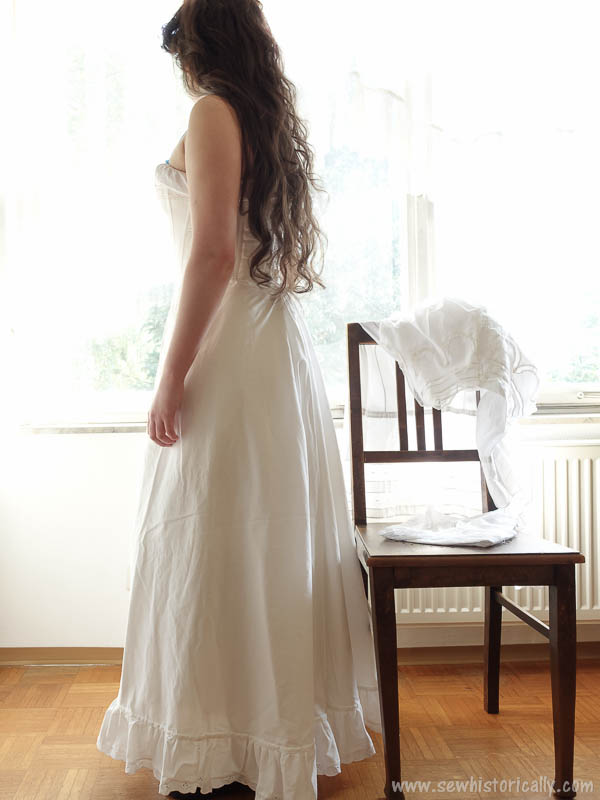 While the short petticoat has no trimming whatsoever, I trimmed the ruffle of the long petticoat with white cotton eyelet lace.

‘The ruffle on the skirt may be […] finished with a lace edge […] care should be taken to select embroidery with a firm edge, otherwise it will not wear well’. (School Sewing Based On Home Problems, 1906) 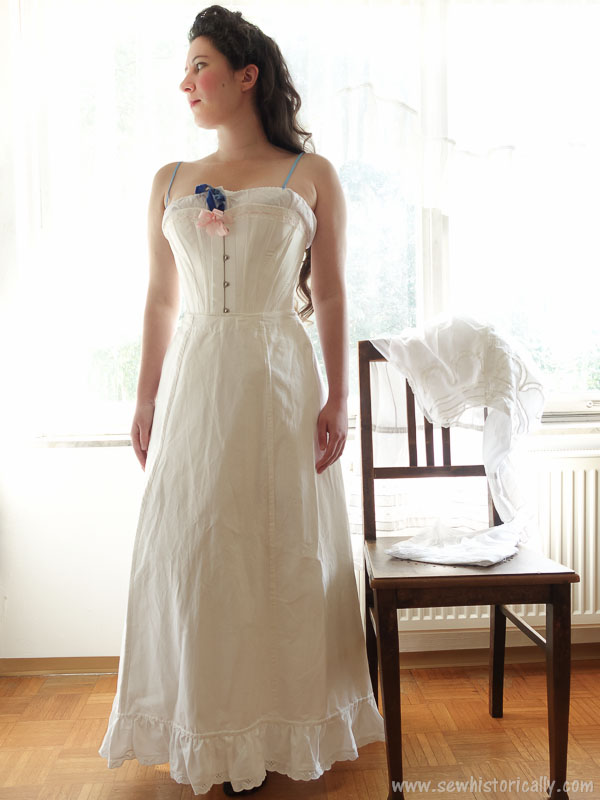 ‘Last but not least in the consideration of the garment maker should be the question of the laundering of the garment. Where there is ample income and it becomes the duty of one person to perform this task, there need not be so much thought bestowed upon it;

but when the work must be done, especially the ironing, by some member of an otherwise busy family, an overworked mother, perhaps, or the wearer herself, who is busy from one week’s end to another with other work, then indeed should the choice be made of the type of garments that will be easy to “do up” and where possible, a number of the crepe garments that require no ironing at all.’ (Clothing For Women: Selection, Design, Construction, 1916) 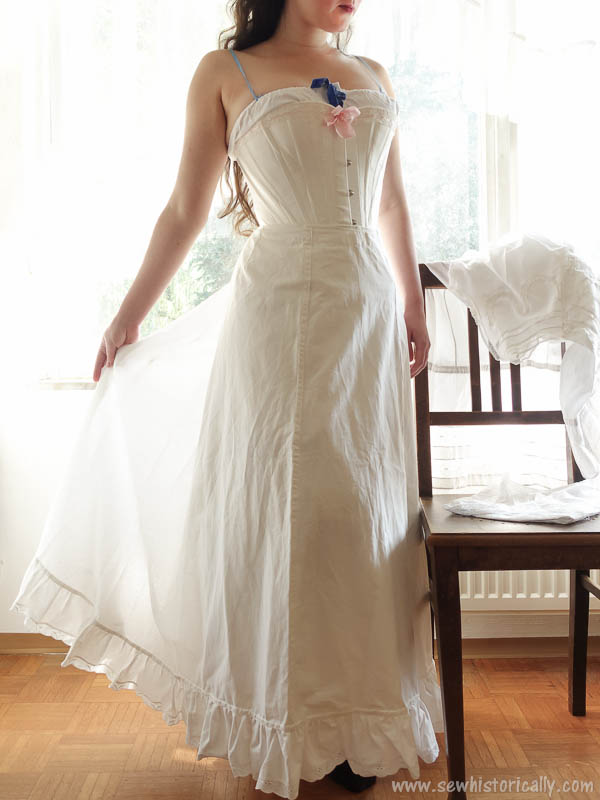