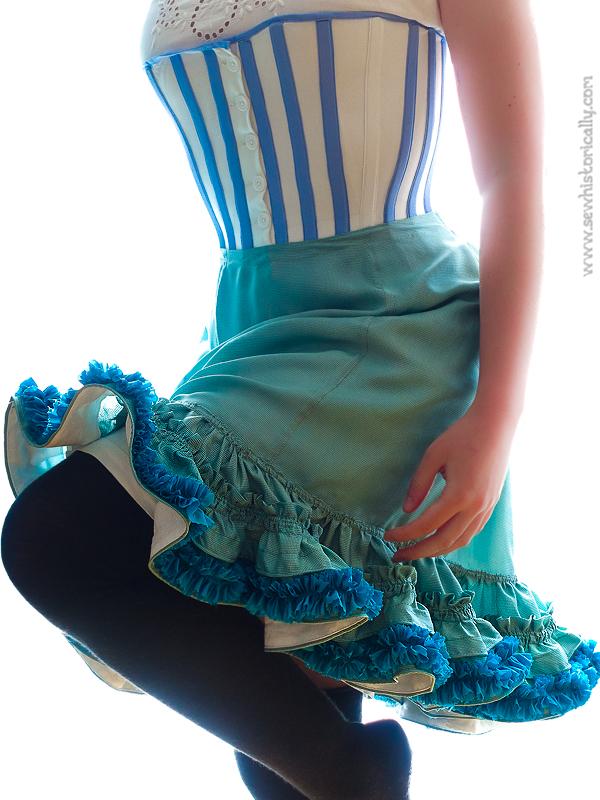 I made a short Edwardian faux silk petticoat to wear under my newest short Edwardian walking skirts. My main inspirations for this petticoat actually came from the short, almost 1950s-style petticoats of Edwardian showgirls and burlesque dancers!

‘Now that so many gowns are made without lined skirts, it is absolutely essential that a good fitting petticoat be worn’ (Los Angeles Herald, 1905).

The taffeta petticoat ‘is fitted smoothly at the top of the front and sides by darts and the skirt is lengthened by a bias flounce […] shirred on a cord. […]  the trimming flounce is decorated with two silk ruchings, the whole arrangement increasing the flaring effect and making quite an elaborate foot-trimming.’ (The Delineator, 1896)

And if you‘re wondering why this Edwardian petticoat is short: Not all petticoats in the Edwardian era were long! Most Edwardian under petticoats were usually just about knee length.

‘Petticoats in […] heatherbloom, with the true silky lustre and as good as silk’ (1908 ad). ‘The quality of the new taffetas does away with the undesirable rustling of the stiff silk petticoat, and the soft silk wears better than the stiff, yet it is not advisable to buy too soft a taffeta for a petticoat unless one can have it made so cleverly that it will hold out the dress skirt despite its softness. The result may be obtained by liberal use of frills, flounces, ruchings, &c., or by much cording’ (The Sun, 1903).

The now mint green faux silk fabric was actually beige before but I overdyed it with turquoise fabric dye so that the fabric turned out a beautiful shade of mint green – my favorite color! 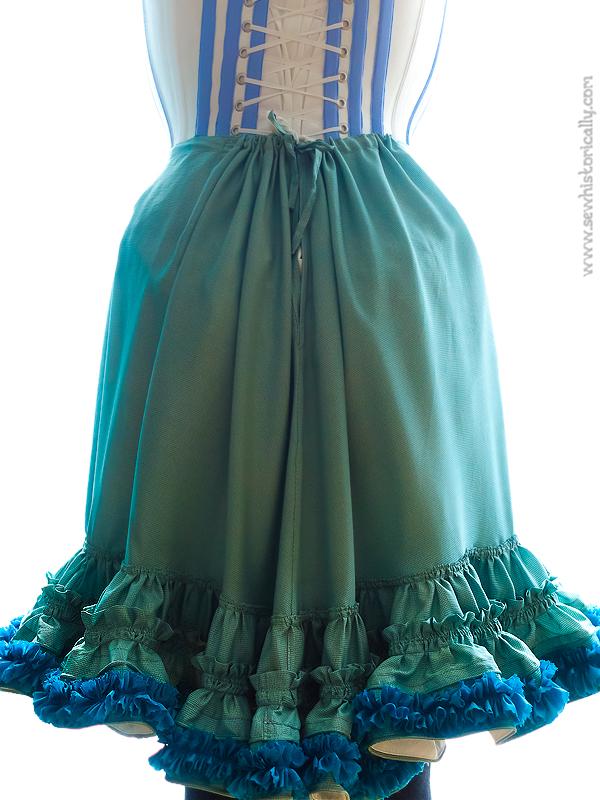 My petticoat has two straight ruffles at the hem – ruffles were either cut on the bias or straight grain in the Edwardian era. The top ruffle of my 1900s faux silk petticoat is 345cm (135“) long and the bottom ruffle (hem circumference) is 675cm (265“) long.

‘The great thing is to get the flare and at the same time the fluffy effect that is so fashionable and which is attained easily by all the ruffles’ (Los Angeles Herald, 1905).

By the way, a ruffle gathered onto another ruffle was called ‘umbrella ruffle’ in the Edwardian era.

The petticoat is closed at the center back: I finished the petticoat with a placket and Edwardian drawstring closure. Here are Edwardian instructions on how to sew plackets.

‘The top of the petticoat is finished with an under-facing, which forms a casing for tapes that are tacked back of the darts in the side-gores and drawn out through openings made at the center of the back, thus regulating the fullness about the waist’ (The Delineator, 1896).

‘There is nothing makes a flounce stand out better than many rows of cording’ (Los Angeles Herald, 1905).

The ‘majority of makers trust to cordings and petticoat fullness to give the skirt its proper lines.’ (The Sun, 1905)

‘Various kinds of cords may be used. Piping cord, which is hard twisted, and cable or dressmaker’s cord, which is soft and loose. Wool makes an excellent cord for soft silks’ (Clothing For Women: Selection, Design, Construction, 1916).

Unlike my Victorian corded petticoat with the cords sandwiched between two layers of fabric, these are basically cord-filled pintucks.

Both ruffles are shirred on two cords. And the bottom ruffle also has a self-heading:

‘The flounce is ornamented by a deep, bias trimming flounce that is turned under at the top to form a self-heading and shirred on cords at the top’ (The Delineator, 1896).

In addition to the corded ruffles, I stiffened the wide flaring hem of my short Edwardian petticoat with a white cotton facing:

‘Nearsilk Petticoat, with […] flounce, lined with canvas, finished with cord heading’ (The Saint Paul Globe, 1900). ‘For really hard wear a facing of percaline [cotton fabric] is an immense help on a taffeta silk’ (Los Angeles Herald, 1905). 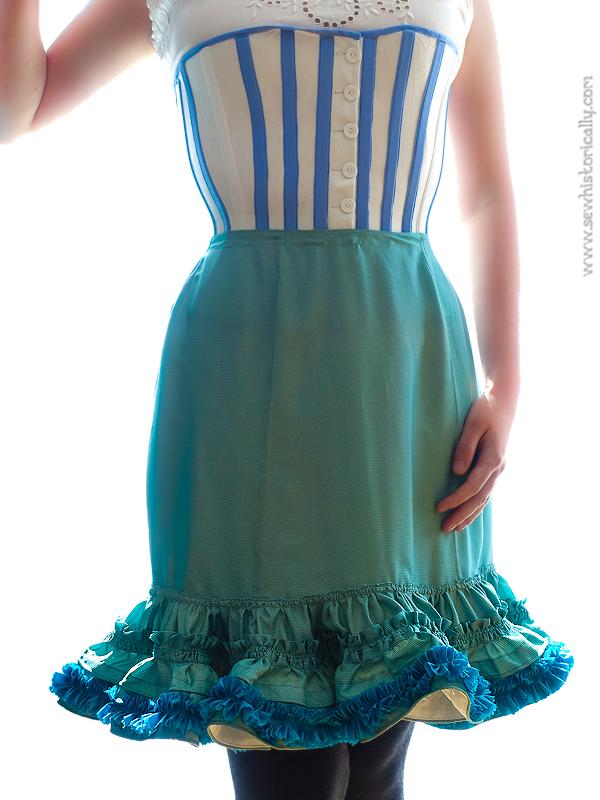 Apart from the cording, I decorated the petticoat with 30 meters faux silk ruchings. Ruchings were a popular choice in the Edwardian era to decorate and stiffen the wide petticoat hems.

‘There is no doubt that the flaring effect of the hem will be accentuated by using some methods of increasing the flare’ such as stiff linings or ‘silk covered cable cords […] If neither of these methods is employed, the desired result will be obtained by voluminous ruchings and ruffles along the lower part of the underskirts.’ (Lewiston Evening Teller, 1904)

In the 1900s, ruchings were usually pinked. But because I don‘t have an antique pinking machine I had to cut the countless meters of ruching with pinking sheers by hand! Ouch! After pinking all these meters and meters of ruchings my hands hurt so badly. Besides, it took so long to cut the ruching by hand – I think I‘m never going to do this again!

‘Ruchings of all kinds are in again’ (The San Francisco call, 1904). ‘Ruching, used excessively in all departments of dress, has been a real boon to the makers of petticoats, offering for many dainty yet inexpensive trimming effects, and a comparatively light colored petticoat may be made fairly serviceable by trimming it in narrow dark ruchings’ (The Sun, 1903).

‘Two bias layers of chiffon of different colorings are gathered to form one of the old-time ruchings and placed at the front of the skirt and on the drapery. Other pliable fabrics are similarly used.’ (Toilettes, 1910)

‘Ruching Stitch. A loose running or gathering stitch used in making frillings or ruchings. The running is worked midway between the edges, and when drawn up gives a frill on both sides.’ (Embroidery Stitches, 1912) ‘On the skirt these ruchings […] are not over an inch in width.’ (The Saint Paul Globe, 1904)

And I pinned more inspirations to my pinterest boards ‘1900s Lingerie‘ and ‘1900s Fashion & Accessories’.