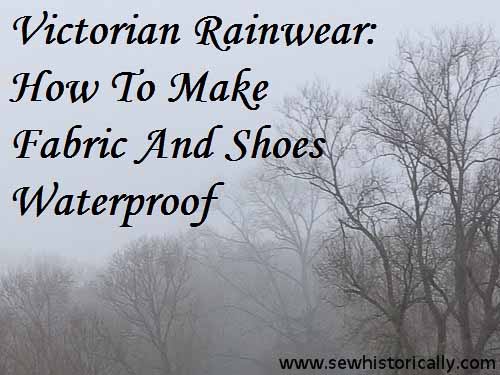 To protect themselves against rain, Victorians wore boiled wool coats, oiled silk capes, oiled silk umbrellas, or early rubberized coats. I’ve compiled Victorian and Edwardian recipes how fabric and shoes were made waterproof between the 1840s and 1910s.

‘Take half an ounce of isinglass (Russian is best), put it into one pound of rain water, and boil until dissolved; take one ounce of alum, put it into two pounds of water, and boil till it is dissolved; take a quarter of an ounce of white soap, with one pound of rain water, and boil till it is dissolved. After each of these ingredients has been separately dissolved, strain them separately through a piece of linen; afterwards mix them well together in a pot’. Spread the cloth on a table, and put the solution ‘on the fire again till it simmers, then take it off, and while thus near boiling, dip a brush into it, and apply it to the wrong side of the cloth’. Let the cloth dry on the table. Then brush it ‘on the wrong side against the grain’. To remove the gloss caused by the solution, brush the cloth with a wet brush, and let the cloth dry again. ‘Three days after the operation has been done, the cloth will be imperious to water but not to air.’ (The Workwoman’s Guide, 1840, p. 229)

‘Cloth may be rendered waterproof by rubbing the under side with a lump of beeswax’. This makes the cloth ‘practically waterproof, although still leaving it porous to air.’ (Henley’s twentieth century formulas, recipes and processes, 1914, p. 749)

Paint the fabric ‘with two or more coats of boiled linseed oil, allowing each coat to dry before the next is applied.’ Improved Dr. Stenhouse’s method (patented in 1864): ‘impregnate the fabric with a mixture of hard paraffine and boiled oil in proportions varying according to circumstances from 95 per cent of paraffine and 5 of oil to 70 per cent of the former and 30 of the latter. The most usual percentages are 80 and 20.’ (Henley’s twentieth century formulas, recipes and processes, 1914, p. 751)

‘Unbleached calico or drill sheeting is generally used for making overalls; all the seams should be double seam. For a dressing, really good boiled oil is perhaps the most durable, though some sailors prefer raw oil, but both take a long time to dry and are apt to become sticky.

The following is safer for oilskins not in constant use: boiled oil 8 parts, turps 2 parts, and melted beeswax 1 part. Warm the oil, add the wax, stir in the turps, and apply warm. The first coat must be well rubbed in. In an hour or so wipe off any surplus that may have drained down to the lower edge. When thoroughly dry, add equal parts of boiled oil to the former mixture, and lampblack or ochre as desired. With this paint give the material two more coats, letting each dry thoroughly in a cool, shady place.’ (Cassell’s Cyclopaedia Of Mechanics, 1900)

How To Make Waterproof Overalls Or Oilskins

‘Unbleached calico is generally used for cheap oilskins, fine drill for better-class goods, and sometimes, but rarely, silk. Best linseed oil, with very little driers, is the most suitable dressing, and should take about two months to dry in a cool, airy place. Lampblack is the cheapest suitable black; ivory black is better, but dearer.

One pound to 2 lb. of lampblack may be used for 1 gal. of oil. If oil alone is used, 1 lb. to 1 1/2 lb. of driers for 1 gal. of oil may be added; with lampblack, 2 lb. to 3 lb. of driers. Ochre is the only yellow pigment cheap enough to use. If the solution has to be made quickly, use plenty of driers, and hang the articles up to dry in a room artificially heated. The solution should be laid on with a stiff brush or scraper in a thin layer, and the first coat must be allowed to become thoroughly dry before putting on a second; two or three coats will be required. The articles should be hung on sticks so that no two portions of the cloth touch. Boiled oil, coloured with ochre or lampblack, and a dash of driers is also used.

It is recommended, in order to keep the oilskins from becoming stiff, that yellow soap cut into shreds should be dissolved in the waterproofing paint, the proportions being 1 oz. of soap to 3pt. of paint. A little beeswax dissolved in the paint is also used for the same purpose. A good black dressing is boiled oil and lampblack 1 qt., to which the white of five eggs and l oz. of melted beeswax are added; give two coats, and allow each coat to dry thoroughly before the next is applied. The drying will occupy quite two weeks. If the drying is not thorough the dressing will become sticky. If driers is used the oilskins are apt to crack. If the dressing is too thickly applied it will peel off where exposed to friction.’ (Cassell’s Cyclopaedia Of Mechanics, 1900)

To make Indian rubber varnish: ‘Put in a bottle two ounces of Indian rubber, cut very small; add one pound of spirits of turpentine, and stop the bottle close, that the spirit may not evaporate; leave it two days without moving, then stir the liquor with a wooden spatula, and if the India rubber is swollen, and has absorbed the spirit, add a sufficient quantitiy for it just to swim in the liquid. Stir it every forty eight hours, till the India rubber is quite dissolved, which is ascertained by squeezing a little of it between the fingers; when in this state put it in a glass bottle and keep it well corked till wanted for use; the longer it is kept the better it becomes.’ (The Workwoman’s Guide, 1840, p. 231) Rubber varnish was used to make rubberized coats and balloons.

How To Repair Mackintosh

‘If the water penetrates the mackintosh in a few places only, obtain from a rubber warehouse some rubber cloth in the piece as near like the coat as possible; also get some rubber solution. Cut the rubber into circles large enough to cover the leaks, spread the rubber solution upon them, and also upon the mackintosh inside wherever a leak occurs, and press the circles of rubber into place. Press under a weight for a day or two. The mackintosh should be thoroughly dry before being treated.’ (Cassell’s Cyclopaedia Of Mechanics, 1900)

‘One pound of mutton suet, four ounces of bees-wax, two ounces of Venice turpentine, mixed altogether; the bees-wax being melted and strained. Put on the composition with a hare’s foot or brush, drying it before the fire, and repeating it at intervals of time, till all the seams and little cracks are filled up.’ (The Workwoman’s Guide, 1840, p. 227)

Boiled oil and finely-powdered charcoal; mix to the consistence of paint, and give the wood two or three coats with this composition. Well adapted for water spouts, casks, &c.’ (The Cyclopædia of Practical Receipts in All the Useful and Domestic Arts, 1841)

5 thoughts on “Victorian Rainwear: How To Make Fabric And Shoes Waterproof”