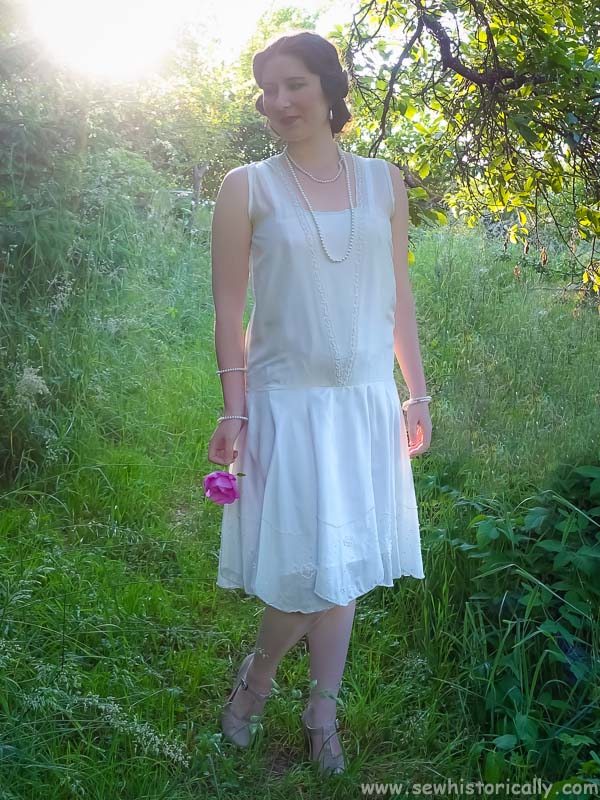 I made this 1920s beaded silk dress a couple of years ago and now we finally took photos of the dress. But this was way more difficult than we thought because it’s so difficult to take good photos of this white-on-white beaded dress. It sparkles and glitters in real life but on photos it looks just white! But you can see glimpses of the bead embroidery on the close-up photos. 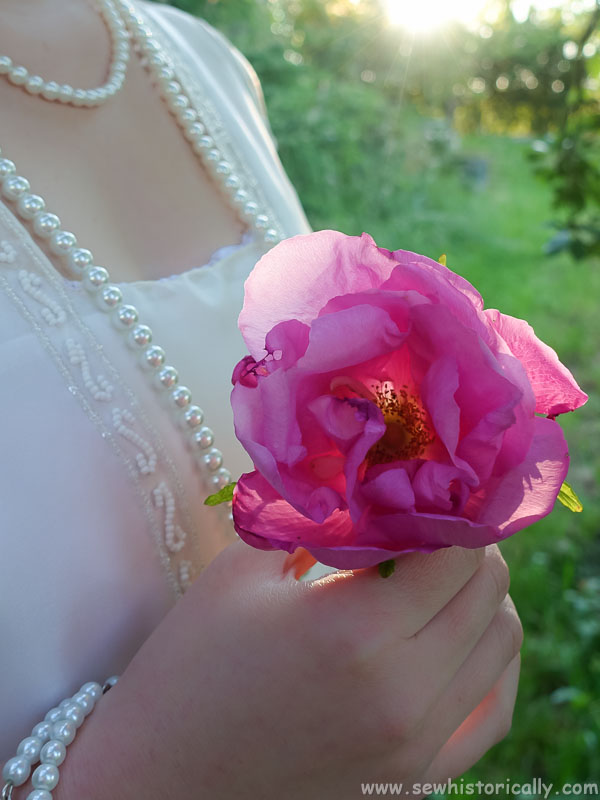 My main inspiration for my beaded 1920s dress were the following antique 1920s beaded silk dresses: 1925 French white silk dress embellished with rhinestones at the MET museum, 1926 silk chiffon dress beaded with crystal bugle beads and 1920s white-on-white floral beaded dress. All these 1920s dresses have a scalloped hem and V-shaped bead embroidery down the front.

My 1920s dress is hand beaded with transparent and white seed beads. I embroidered the front of the dress in a V-shape with meandering scrolls inspired by the following antique beaded 1920s dresses: 1920s dress trimmed with crystal beads that ‘run around the neck of the dress and form a deep V line in the front’, photograph of a beautiful 1920s beaded dress, 1928 beaded dress by Paquin (the third picture) and 1925 French beaded chiffon dress.

And the hem is embroidered with stylized roses and other flowers. Because beaded dresses are difficult to iron, it’s important to bead the hem of the dress because the seed beads help to weigh the dress down. Otherwise the hem looks crumpled like on this antique beaded 1920s dress. 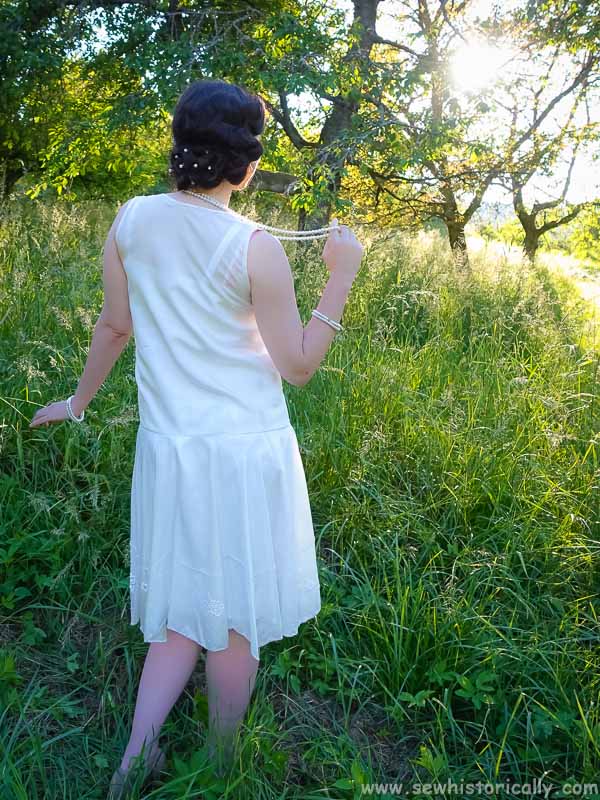 I used off-white 100% silk taffeta for my beaded dress. In the 1920s, expensive beaded evening dresses were usually made of silk. Silk chiffon, silk satin and silk taffeta were all popular dress fabrics in the golden 20s.

The silk taffeta I used is really thin – like lining fabric. But 1920s dress fabrics were usually thinner than in other eras because thin fabrics drape better. 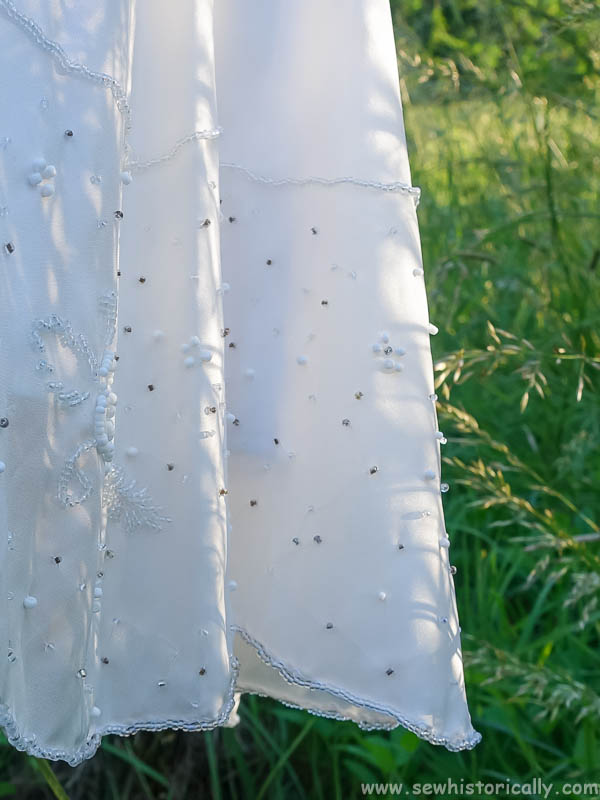 I cut the dress using my usual 1920s dress pattern. As you may know, 1920s dress are usually cut on very simple lines. The top part of my 1920s beaded silk dress is just a rectangle with a low waist and the bottom part is cut like a circular skirt. 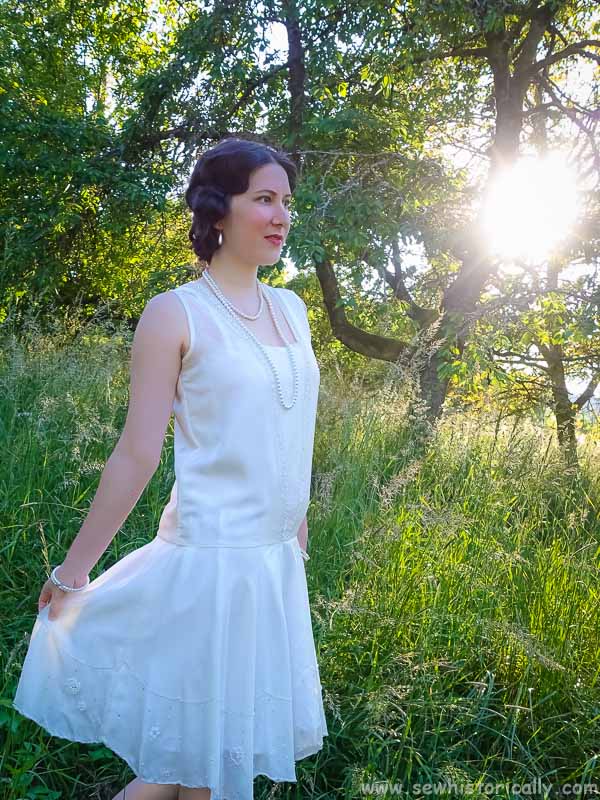 For the photos, I styled my long hair into a faux 1920s bob.

And because the dress is slightly sheer I’m wearing the dress over my usual 1920s lingerie. 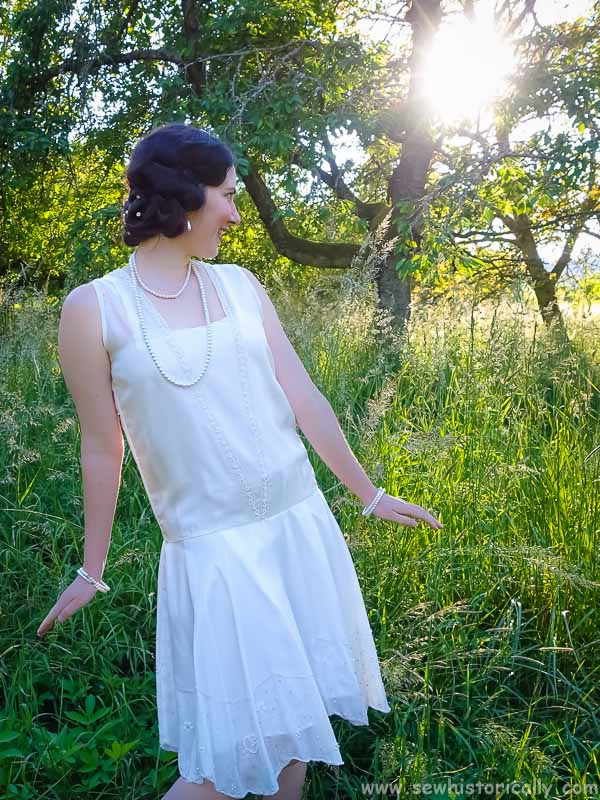