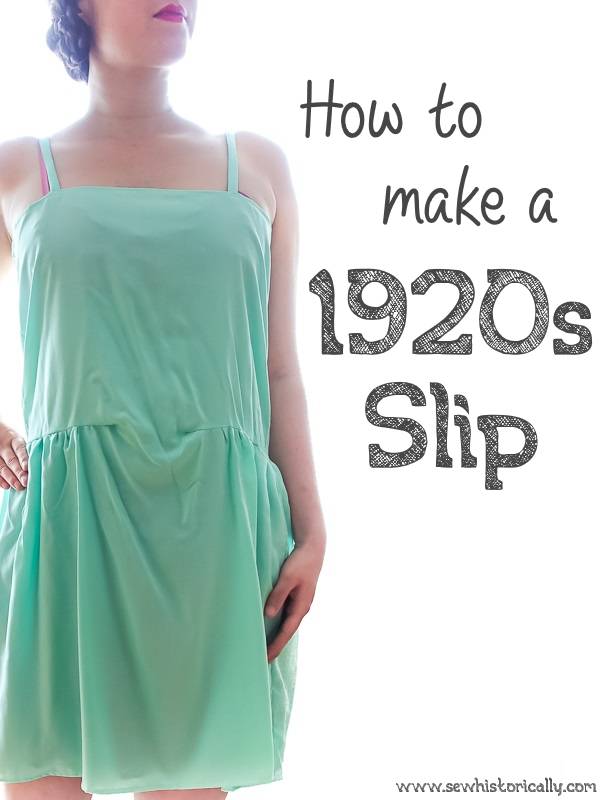 And what’s best, a 1920s slip is a one yard sewing project. Yes, that’s right: You only need one yard of fabric to make a 1920s slip! Additionally, a 1920s slip pattern is one of the easiest sewing patterns, so it’s a great project for a sewing beginner.

‘Undergarments must be carefully fitted and correctly designed in order that the outer garments may be properly effective. […] Because of the simplicity of present-day undergarments, in many cases no pattern is necessary’ (Underwear And Lingerie, 1925).

1920s slips slip on over the head without closures. Also, the front and back of 1920s slips are cut exactly alike. Additionally, 1920s slip patterns are very geometric with almost no shaping. The only shaping is that they’re gathered at the hips. Slips like this one were also known as ‘side-dart chemise’ in the 1920s:

The side-dart chemise ‘is a wise choice for the large-hip woman […] The cut of the garment allows of a smooth, close-fitting effect, but plenty of ease is introduced through the lower portion by means of darts at the sides. […]

The simplicity of cutting makes a pattern unnecessary, although, if you wish, you may form a pattern in paper and use this as a guide in cutting the material.’ (Underwear And Lingerie, 1925)

You can also use this 1920s slip pattern to make a simple 1920s slip dress – the famous 1920 one-hour dress: Just add sleeves or a cape collar and embellish the dress with ruffles or DIY fabric flowers if you want.

Because 1920s slips consist basically of rectangles and all seams are straight, it’s a perfect sewing project if you’re a sewing beginner. The only tricky part is the gathers at the hips.

‘Underwear offers one of the best opportunities to become an efficient sewer.’ (A Complete Course In Dressmaking, 1921)

‘If there should be any hesitancy about cutting into material, practice with paper folded and marked according to the directions; then, when you experience for yourself the ease with which such cutting may be done, you will feel thoroughly confident to cut into whatever fabrics you desire to use.’ (Underwear And Lingerie, 1925)

A 1920s slip consists of rectangles. So best use flowy, drapey, thin, silky fabric for your 1920s slip. In the 1920s, silk – silk crepe or silk charmeuse – was a popular choice to make slips.

‘Silk has an economical feature to recommend it, for while its initial cost is greater, if time can be given to careful laundering, the increased wear it gives will make its purchase for underwear a good investment.

Crepe de Chine probably enjoys the most favor as a silk lingerie fabric, with radium or Pussy Willow taffeta next in popularity. For more elaborate effects, wash satin, triple voile, or Georgette may be chosen. Silk Jersey, which may be purchased in tubing form, makes a very practical material for vests. Pongee is popular for tailored garments.’ (Underwear And Lingerie, 1925)

I like to use thin, plain-weave silk fabric for 1920s underwear. But silk is expensive, so you can also use artificial silk instead.

And art silk was already used for slips and dresses in the 1920s. Artificial silk was made of natural cellulose fibers and was known under various trade name in the 1920s, such as celanase. 1920s art silk fabric is nothing else than woven rayon (viscose) or cellulose acetate fabrics you can buy today. 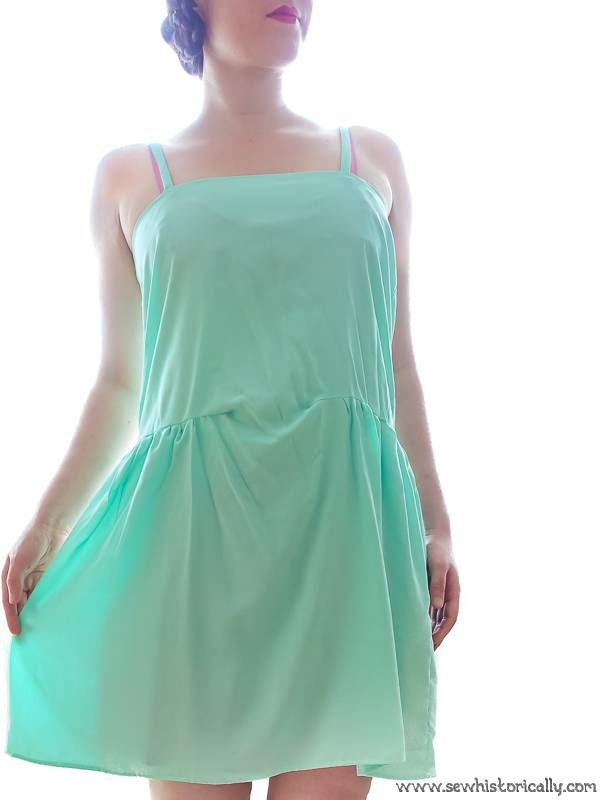 And, of course, you can also use thin cotton fabrics, such as batiste or lawn, and thin linen fabric and even knitted fabric.

‘In cotton, which is the fabric in most general use, choice may be made of nainsook, long-cloth, batiste, cotton crepe, voile, cross-bar, coutil, or muslin […] Handkerchief linen makes exquisite lingerie, but, because of the disadvantage of crushing readily, its fresh appearance is not long retained. Also, its expense limits its utility to that of a luxury.’ (Underwear And Lingerie, 1925)

‘If you are thinking of economy, I suggest buying a bolt of nainsook […] Batiste is another favorite for underwear that is inexpensive […] If it is midsummer […] voile and mulle also are possibilities.’ (A Complete Course In Dressmaking, 1921)

‘For wear in the home or under cotton dresses, sateen, long-cloth, […] or a light-weight muslin will be found satisfactory. For dressier wear, crepe de Chine, […] crepe-back satin, and pongee, as well as the knitted silks […] have the required smoothness […] [for] a wool or silk dress’ (Underwear And Lingerie, 1926). 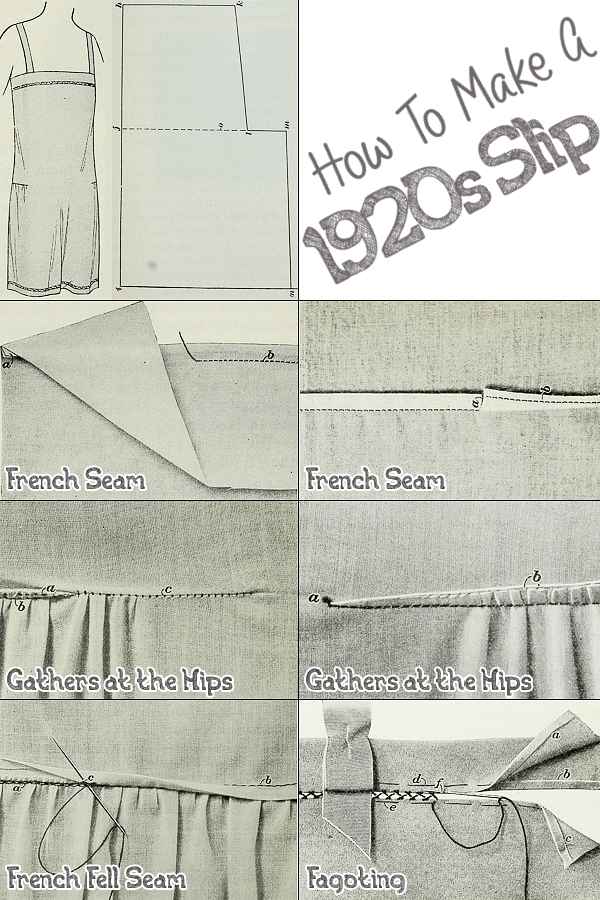 1920s slips came in a variety of colors: pastel colors, like pink, peach, yellow, aqua and lime green, as well as black and white were popular color choices.

‘The manner of trimming lingerie divides it into two types; the tailored, which is the plain or almost untrimmed kind, and the feminine sort, in which dainty materials are of the first importance and the trimming of lace or embroidery dominates the effect. Both types have their followers; in fact, many women have underwear both trimmed and plain’ (Underwear And Lingerie, 1925).

1920s slips were embellished with lace, such as cotton Valenciennes lace, lace applique, hand embroidery, such as flowers and appliques, pleats, pintucks, ruffles, bias binding and machine hemstitching. In the 1921 book ‘A Complete Course In Dressmaking’ you’ll find some ideas how to embellish your 1920s slip.

‘There is no more attractive form of trimming for lingerie than hand-work, even in its simplest form’. ‘The forms of hand embroidery particularly appropriate for lingerie include applique, French knots, feather-stitching, fagoting, rambler-rose stitch, and outlining. […] More pretentious stitches are eyelet and French embroidery, and the buttonhole scallop.’ (Underwear And Lingerie, 1925).

Related: How To Make Eyelet Lace By Hand

‘Even the most inexpensive undergarments, if carefully chosen, will express as much refinement, good taste, and common sense as the most elaborate and expensive ones, and, no matter how meager may be her purse, every woman can have dainty, neat, well-fitting lingerie if she chooses her materials carefully and her designs wisely, and does her sewing skillfully.’ (Underwear And Lingerie, 1925) 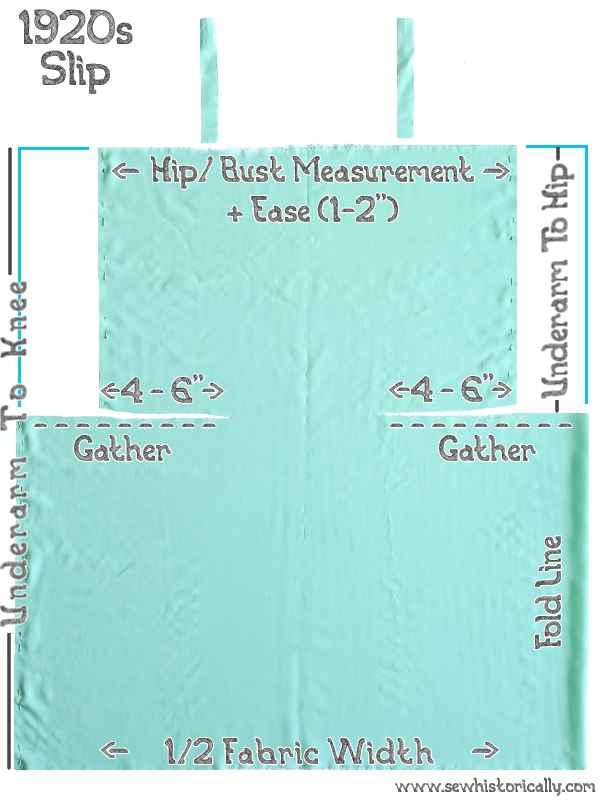 Fold the one yard of fabric like in the picture above: The fold line becomes one of the skirt side seams.

By the way, you don’t need the whole yard of fabric for the 1920s slip: I make my slips usually around 30″ (75 cm) long (from underarm to knee). You can use the leftover fabric to make self-fabric shoulder straps.

If you’re a sewing beginner, I’d suggest that you use plain seams instead of French seams or flat-felled seams for your first 1920s slip. And finish the raw edges with zigzag stitches or a serger.

Or use lace or silk ribbon instead:

‘Supply 1 yard of ribbon for shoulder straps if you prefer ribbon to self-fabric’ (Underwear And Lingerie, 1925). 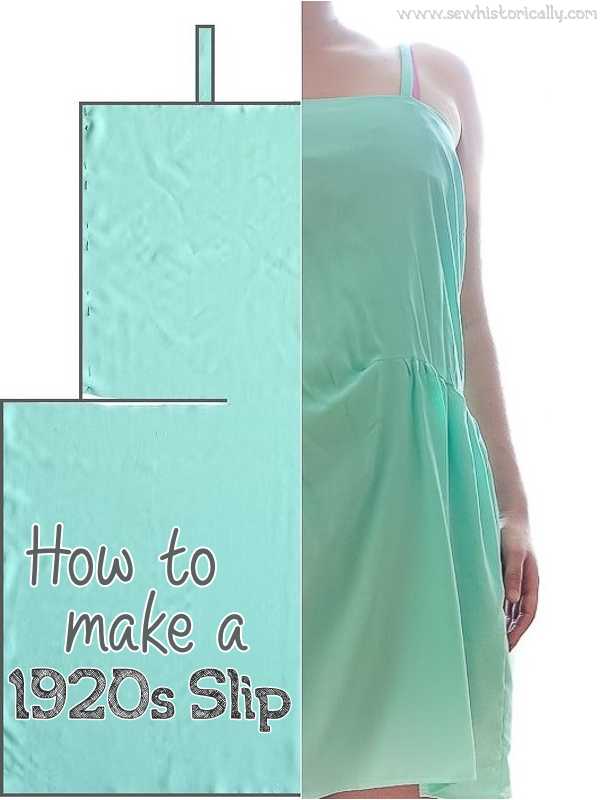