1860s bonnets: high above the forehead, there’s also the main decoration; ‘spoon bonnet’ (early 1860s bonnet, mid 1860s bonnet); hats are now sometimes worn instead of bonnets (1865 fashion plate) (prior to the 1860s hats were just worn at the seaside, in the country, or by children)

1840: ‘Bonnets are made of velvet, plush, satin, silk, crape, book-muslin, chip, gingham, and glazed calico. The foundations are either pasteboard, buckram, stiff muslin, or willow. Bonnets are kept in shape by means of wire, chip, or whalebone.’ (The Workwoman’s Guide, 1840), bonnet shapes (The Workwoman’s Guide, plate 20) photograph (front and side view of bonnet), painting of coal scuttle bonnet

1844: favourite materials ‘are velvet, velours epingle, and satin. Feathers, of the lightest and most elegant kinds, will be more in vogue for trimmings than flowers. Velvet panachees will be the favourite flowers. Drawn bonnets of velvet will be very fashionable. A new style of trimming, composed of noeuds of shaded velvet ribbon and blonde lace, will be in vogue.’ (The Illustrated London News, 1844) 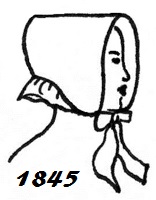 1849: photograph of pretty bonnet trimmed with frills and ribbon, photograph 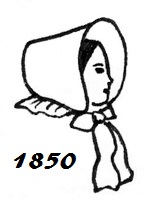 1850: round and open around the face. ‘White drawn silk bonnets, covered with foldings of net, are much worn. Also, drawn lace and crape bonnets, and black and white lace ones, are worn. […] Many of the straw bonnets are of dark-colored ground, ornamented with fine open straw work.’ (Harper’s New Monthly Magazine, 1850), bonnet descriptions, photograph, fashion plate of pink bonnet trimmed with feathers and white bonnet with veil, fashion plate of yellow bonnet with flowers (side view)

1851: bonnets are open in front and close at the ears; ‘moderately trimmed’ with frills, lace, flowers, or feathers. Crowns are made in ‘jockey form’ – ’round, but not plain’. The curtain or bavolet is now important for a ‘youthful appearence’ (source)

1853: shaded silk for young ladies, ‘for adults silks of a light and undecided colour […] the straight cottage form […] will always, more or less, be fashionable […] Drawn bonnets’ in silk, satin, or net over a foundation of white or colored muslin, stiffened with cane or whalebone (The Ladies’ self instructor in millinery, 1853), ‘bonnet worn rather back’ with narrow brim and ‘sloping off well from the cheeks’ (source); bonnets decorated with flowers are fashionable (source). Descriptons of two bonnets, fashion plate with six bonnets, fashion plate of white bonnet (back view)

1855: Curtains with a point or slashed in the middle become fashionable (source); ‘pointed curtain’ and decoration with long streamers (Godey’s Lady’s Book, 1855).

1858: painting of bonnet with veil

1859: ‘bonnets advance a little more over the forehead than those heretofore worn, and are very open at each side of the face. The bavolet, or curtain, is cut square, not very deep, and is set on in double plaits. The ribbon employed for the strings is edged on one, or on both sides, with a plaiting of narrow ribbon. Velvet flowers or feathers are the ornaments most used.’ (Peterson’s Magazine, 1859) 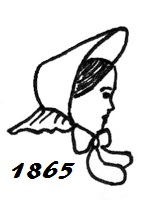 1868: still diminutive size, high in front with trimmings like a diadem (source and description of the chapeau Cocodette), painting with hat