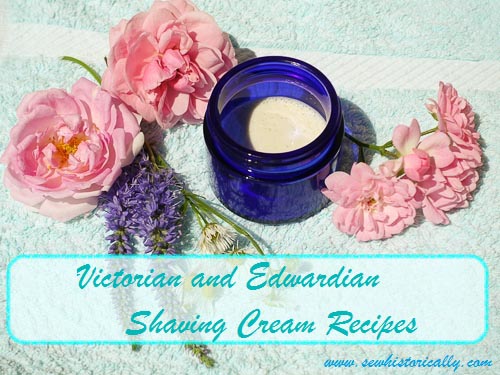 In this part of my Victorian and Edwardian beauty series I’ve compiled recipes for DIY shaving cream from the 1840s till the 1910s.

1840s Shaving Paste (The Cyclopædia of Practical Receipts in All the Useful and Domestic Arts, 1841)

‘Melt and perfume with attar of roses.’

‘Melt carefully over a slow fire, in an earthen vessel’; then add the essential oils. ‘Mix well and make it into forms.’

‘Melt them together, and form a paste, […] adding a little proof spirit and scent, at will. Some persons melt with the soap about 1 drachm of spermaceti.’ 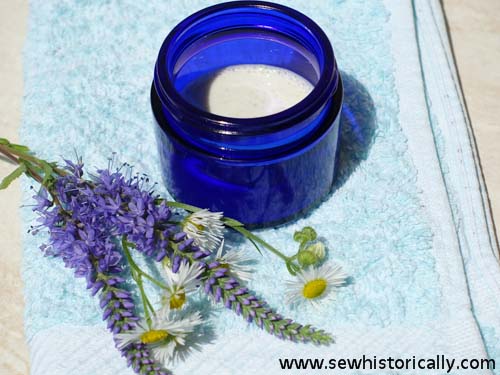 ‘Beat them to a smooth paste with water or eau de rose; and put it into covered pots.’

Melt together spermaceti, wax and oil; ‘beat it up with […] soap’, and perfume with lavender or Cologne water.

Melt the fats, and while warm beat in the soap. 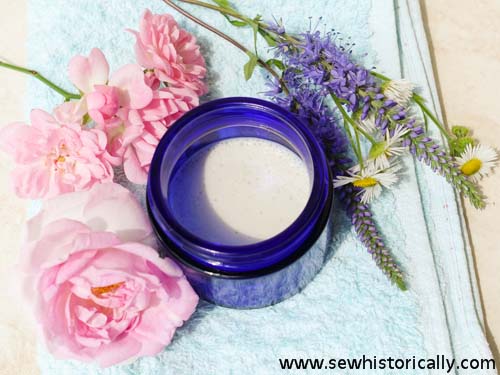 ‘An emulsion of paraffine wax, melting at 131° F., should be used. This is prepared with 25 per cent of wax and 2 per cent of tragacanth, the wax being melted and mixed with the tragacanth previously made into a mucilage with some of the water. The addition of a little stearine or lard renders the emulsification of the wax easier, while about 10 per cent of alcohol makes the preparation more agreeable to use. The fatty odor of the preparation may be covered by the addition of 0.5 to 1 per cent of lavender oil, and the finished product then appears as a thick white cream. In use a small quantity is rubbed over the area to be shaved and the razor immediately applied. As the water in the emulsion evaporates, the particles of wax previously distributed in the emulsion become coherent and fill up the depressions in the surface of the skin from which the hairs arise, thus forming a mechanical support during the passage of the razor. The quantity required is very small, 1 ounce being sufficient for shaving the face about 6 times.’