Did you ever wonder what was served at Victorian dinner parties? Victorian cooks knew how to make impressive dishes for special occasions, such as a whole boar’s head, snail soup and roast swan! 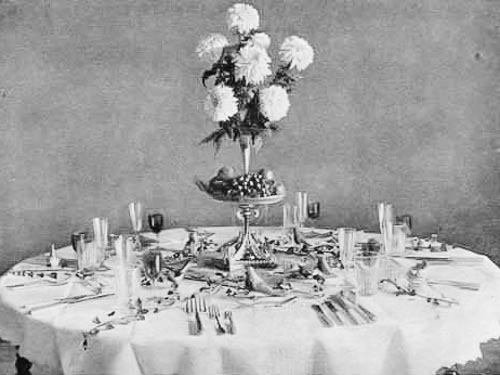 Most Victorian dishes are not different from what we eat today. In the past, I tried several Victorian recipes, one of my favorites was Victorian orange ice cream.

But there are some Victorian dishes that sound strange to our modern ears, such as roast beaver tails, bear’s paws, snail water and frog leg pie! For centuries, a roasted whole boar’s head was a favorite English Christmas dish. Cooking a boar’s head and making snail soup from scratch is a complicated and lengthy process. Before attempting to make Victorian escargot soup, Victorian cooks had to gather fresh snails first! ‘The vineyard and the spiral species are the only kinds that can be used for this soup’ (German National Cookery For American Kitchens, 1904, p. 230).

While some of the following weird Victorian dishes were served at elaborate Victorian dinners, such as peacock pie, snail soup and roast swan, snail water was more of a medicine. Snail water ‘cureth a consumption and dropsy. It may be distilled with milk for weak people and children, with hart’s-tongue and elecampane.’ (The Edible Mollusca Of Great Britain And Ireland, 1884) 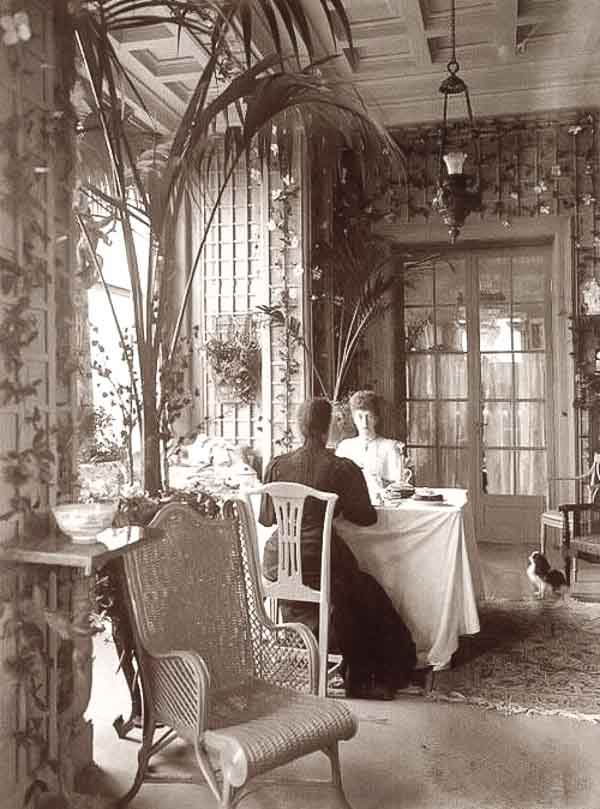 ‘The vineyard and the spiral species are the only kinds that can be used for this soup, and then only when they are closed. Boil for an hour in boiling salted water, pull them out of their shells with a fork, take off the little patch of skin from the top, cut away the ring which encircles the snail and remove the front point. Sprinkle with a handful of salt which will loosen the slime, wash them 3 or 4 times in warmed water and press them dry.

Boil about 50 snails in bouillon, take them out of the kettle, chop 2 — 3 of them very finely, stew in butter for a short time, add as much bouillon as is required to make the soup, put in a little mace and boil for a few minutes, stir in the yolks of a few eggs and serve the soup with wheat bread toast and the rest of the snails in the tureen.

If the soup is cooked during Lent, boil all of the snails in water until tender, chop all of them finely with 4 hard boiled eggs, 2 onions, minced parsley and a few rolls soaked in milk, stew this in butter for 15 minutes. Then pour in part of the snail broth, 1/2 bottle of light wine and a pint of pea broth, season with salt and pepper and stir through the soup the yolks of a few eggs.’ (German National Cookery For American Kitchens, 1904, p. 230)

How To Cook A Boar’s Head

‘The following receipt for dressing a boar’s head is a French one: The head must be well singed, and rubbed with a piece of brick to remove the hair. Scrape it with a knife, and clean it well; bone it, and cut out the two jaw-bones, and take off the snout; slit it underneath, so that it may stick to the skin on the top, and take out the brain and tongue, and rub some salt into all the parts of the flesh.

Put the head together again, wrap it up and tie it in a cloth, then put it into a saucepan of hot water, with some leaf-fat of a pig, two bay leaves, all kinds of sweet herbs, coriander, and aniseed, salt, nutmeg, and cloves pounded, some rosemary, and an onion. When half boiled add a quart of wine, and let the whole boil for twelve hours. When sufficiently boiled, let it cool in its own liquor. When cold, put it in a dish and serve it up. The tongue may also be boiled in the same liquor. Put a lemon in the mouth, and decorate with sprigs of rosemary and Christmas.’ (Warne’s Model Housekeeper, 1882)

‘Time, two hours for 13 lbs. weight. Cygnet must not be skinned; pick the bird, and truss like a goose; take two pounds of rumpsteak, chop it fine, season well with spice, a piece of onion or shalot, and butter. Rub the breast both inside and outside with beaten cloves, then stuff with the above, taking care to sew the bird up carefully and to tie it up very tightly on the spit, so that the gravy may not escape. Enclose the breast of the Swan in a meal paste, after which cover the whole bird with paper well greased with beef dripping.

About a quarter of an hour before the bird is taken up remove the paper and the paste, baste well with butter and flour till brown and frothy. A swan of 13 lbs. weight requires about two hours roasting, with a fire not too fierce. Cut out some tiny swans in white turnip for garnish, put a swan (in turnip) on each leg and each wing, and a paper frill, nicely cut, about the shoulders […] A squeeze of lemon improves swan when eaten, and fried bread crumbs should be served with it.’ (Warne’s Model Housekeeper, 1882)

‘Put the frog legs into a deep dish with water, vinegar and salt and wash thoroughly with a whisk. Then melt some butter, lay the frog legs with a few eschalots and a little salt into this, cover and simmer until nearly done. Then sprinkle over it some flour, add some strong bouillon, made of extract of beef, mace and a few lemon slices, cook the frog legs until done and stir the sauce with a few yolks of eggs.’ Fill the frog leg ragout with good meat dumplings into the pie crust. (German National Cookery For American Kitchens, 1904, p. 231)

‘Kill a young half-grown peacock a few days before it is to be used ; cut off the head, pluck, empty, wash very thoroughly, rub inside and out with spices and salt.

Put a piece of butter into a saucepan, let the meat simmer in this for a little while, mince the liver with a small piece of pork fat and an onion, brown a handful of bread crumbs in butter, simmer the mince in this, pour the butter out of the pan and substitute for it the minced liver, etc., together with1/4 bottle of wine; boil an ounce of truffles in wine and put them in with the wine, a large spoonful of bouillon, a few lemon slices, a little sweet basil and a few bay leaves, cover the pan tightly and when the peacock has been cooked slowly until nearly done, let it cool in this sauce.

Make a good butter crust, put in the bird with a piece of pork fat on its breast, close and brush the crust as usual and bake in an oven for 3/4 of an hour to a light brown. The remaining sauce is thinned with bouillon and a little lemon juice and kept hot. When the pie is taken out of the oven remove the upper crust and pour in the sauce, then put the head of the peacock on the cover, close the pie and send it to the table hot.

Old birds can be used for small pies only […] it may be well to lay the meat into a seasoned broth some time beforehand.’ (German National Cookery For American Kitchens, 1904, p. 232)

‘A young badger is quite palatable and tender, similar to pork tenderloin. Let it lay in vinegar for 2 – 3 days, with onions, carrots, sage and all kinds of kitchen herbs, bay leaves, pepper, cloves and salt; lard and roast it like young hare, but for a shorter length of time.’ (German National Cookery For American Kitchens, 1904, p. 233)

‘Bear’s paws are by many considered to be a great delicacy, in fact the best part of the bear.

Clean the forepaws very nicely, boil in salted water until tender, dip them in melted butter, egg, and then in bread crumbs, broil with frequent basting until lightly brown.

Garnish with lemon slices and capers and send to the table with any kind of a spicy gravy. Sometimes the paws are pickled in vinegar and savory herbs for a day beforehand; then boil in bouillon and part of the marinade instead of water before broiling them.’ (German National Cookery For American Kitchens, 1904, p. 233)

‘The flesh of the beaver is usually braised, but the tail, which is considered a delicacy, is roasted after it has lain in a marinade for a day.

Scrape it carefully, boil in vinegar, water and some salt until tender and then turn it in whipped egg yolks and rolled crackers. Pour melted butter over it, roast on a broiler and serve with sliced lemons.’ (German National Cookery For American Kitchens, 1904, p. 234)

‘Take of comfrey and succory-roots, of each four ounces, liquorice, three ounces, the leaves of hart’s-tongue, plantain, ground-ivy, red-nettle, yarrow, brooklime, watercresses, dandelion, and agrimony, of each two large handfuls; gather these herbs in dry weather, and do not wash them, but wipe them clean with a cloth. Then take five hundred snails, cleansed from their shells, but not scoured, and of whites of eggs beaten up to a water, a pint, four nutmegs grossly beaten, the yellow rind of one lemon and one orange. Bruise all the roots and herbs and put them together, with the other ingredients, in a gallon of new milk, and a pint of Canary; let them stand close covered, forty-eight hours, and then distill them in a common still, with a gentle fire. This quantity will fill a still twice. It will keep good a year, and is best when made spring or fall; but it is best when new. You must not cork up the bottles for three months, but cover them with paper. It is immediately fit for use; take a quarter of a pint of this water, and put to it as much milk warm from the cow, and drink it in the morning, and at four o’clock in the afternoon, and fast two hours after. To take powder of crab’s eyes with it, as much as will lie on a sixpence, mightily assists to sweeten the blood. When you drink this water, be very regular in your diet, and eat nothing salt nor sour.’ (The Edible Mollusca Of Great Britain And Ireland, 1884)