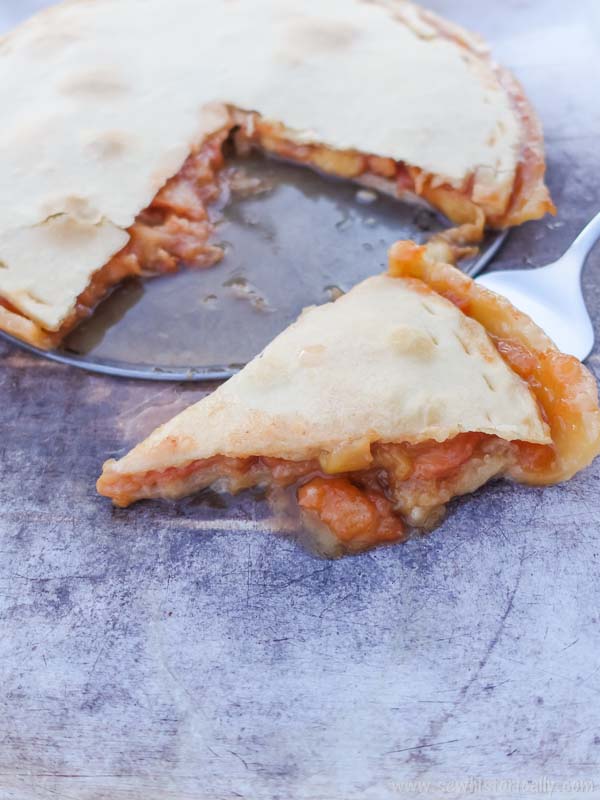 This recipe for homemade peach pie from scratch is from the Edwardian era, it was published in ‘Best Recipes For Baking. A Book For The Home’ in 1907. Like most old recipes from the Victorian and Edwardian era, it’s not very specific! Old recipes usually are like: Make a pie crust, add enough fruit or custard and bake in a moderately warm oven! 😉

It’s not my first historical pie recipe, so I adapted the recipe and added the missing information, such as how much filling you’ll need and how long to bake the pie. And because old cake recipes are usually very sweet, I halved the sugar – and the Edwardian peach pie was still very sweet!

I baked the Edwardian peach pie in grandma’s large 12-inch (30 cm) pie plate again, which I’ve already used for my Homemade Cherry Pie. So if you use a regular 9-inch (24 cm) pie plate, you probably have to half the dough and peach filling. 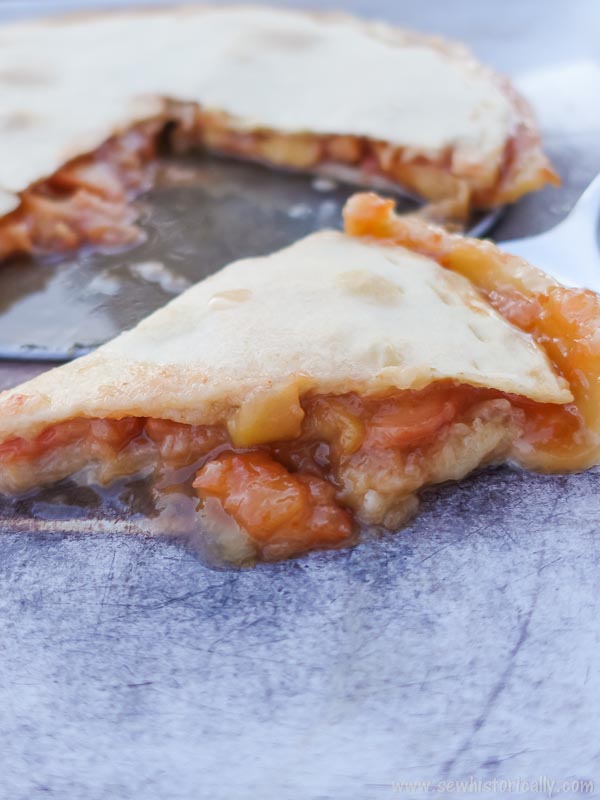 ‘Use the very best materials in making pastry. The flour should be of a good quality and free from mould or must. The lard or butter should be good and clean and if the butter is very salty it should be washed a little in cold water. The water used should always be cold, in hot weather use ice water.

When the crust is made it makes it much more flaky and brittle if covered with a cloth and set in a cool place for half hour or hour, in summer it should be placed in the ice box. It improves pie crust to add a little baking powder. One teaspoonful to a quart (one pound) of flour is sufficient.

Pie crust can be kept a week or more and the last will be just as good as the first, if put in a tightly covered dish, and set in a cool place in cold weather and put in the ice box in warm weather, you can then make fresh pie every day with little trouble.

How To Bake A Pie Crust

Baking pastry requires a good solid heat. To get a nice bake on your pastry have the oven hot with a good bed of coals in your fire box so you can keep your oven at the right temperature. You can try your oven and see how hot it is by sprinkling a little flour in it, if the flour stays white quite awhile your oven is too cold, if the flour browns in a little while it is right, and if it browns quick and then burns it is too hot.

Pie tins should be greased with good butter or lard before being used. It adds very much to the bottom crust if tin is dusted with cracker meal, always after dusting turn tin over and knock out the loose meal.

‘Fruit juices […] may be prevented from boiling out of the crust in several ways.

1st. Put the usual quantity of sugar for the pie in a bowl. Add enough cold water to form a kind of dough; stir in a heaping tablespoonful of flour, or a level teaspoonful of corn starch and mix thoroughly. Pour this over the pie-plant or other fruit. Add the top crust and bake in a hot oven.

Or roll up a small tube of white writing paper and insert in an opening in center of the upper crust, letting the lower end rest on the under crust and the upper project above the pie. The juice will collect in this and it may be removed when the pie is done.’ (Three Meals A Day, 1902) 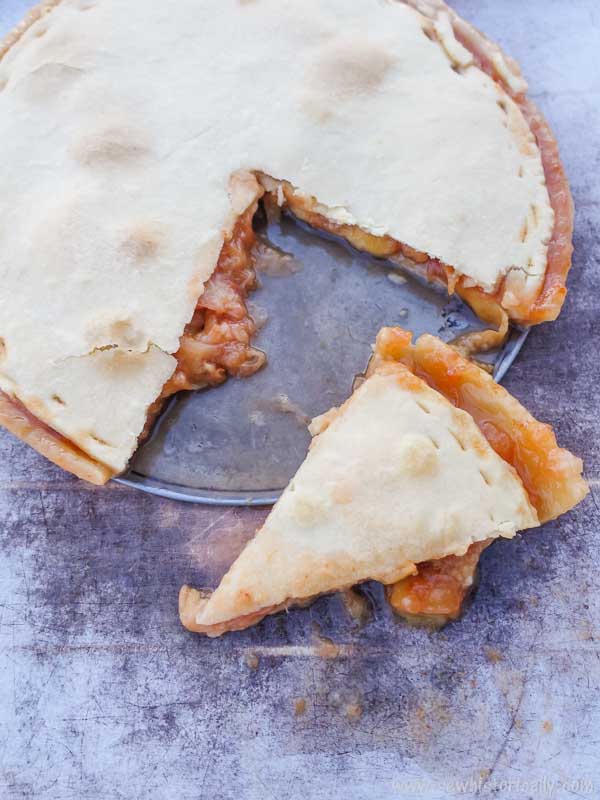 ‘Sift one teaspoonful baking powder in one pound of flour, rub into this eight ounces of good butter, add a pinch of salt, add enough cold water to make a soft dough, do not work, mix it just as light as you can, just so there is no dry flour left, put in ice box or cold place and let set for an hour or more, it will then be ready to use.

After making the pie dough take a portion of it and lay on well dusted board, dust the dough on top just a little, take rolling pin and rub a little flour on it, make two rolls side ways, then dust the dough again if sticky, then proceed by rolling to and from you, roll until the crust is the thinness desired, about one-eighth inch is about right. Rolling out the crust this way you do not have to turn it over and over, which ruins crust to a certain extent, when not turned it makes it flaky and crisp.

Now fit the rolled out dough to the pie pan, cut the edge all the way around, take dough cut off and some fresh dough and roll as before, the top crust should be a little thinner than the bottom, when rolled to thinness desired, fold over until it looks like a half crust, take a sharp knife and cut several places along the doubled edge, this is for the steam to escape. Now fill your pie plate with your filling’ (Best Recipes For Baking. A Book For The Home, 1907).

‘Peel enough peaches and slice into thin slices, to each cup of sliced peaches add half cup sugar. Line pie pan with pie dough and fill, put tablespoonful melted butter over the peaches and sugar.’

If you use canned peaches: ‘Chop the peaches up fine, sweeten to taste, fill pie pan lined with pie crust, flavor with a little butter.’ (Best Recipes For Baking. A Book For The Home, 1907)

‘Lay top crust on pie and turn back the laped part of the crust press around the rim sealing the two crusts, take a fork and mark around the edge, dipping the fork in flour occasionally to prevent sticking, brush the loose flour off the top and bake in rather a quick oven until a light brown, and the filling boils up through the cut places in the crust. If you wish a gloss on your pie wash the top with an egg before baking.’ (Best Recipes For Baking. A Book For The Home, 1907) 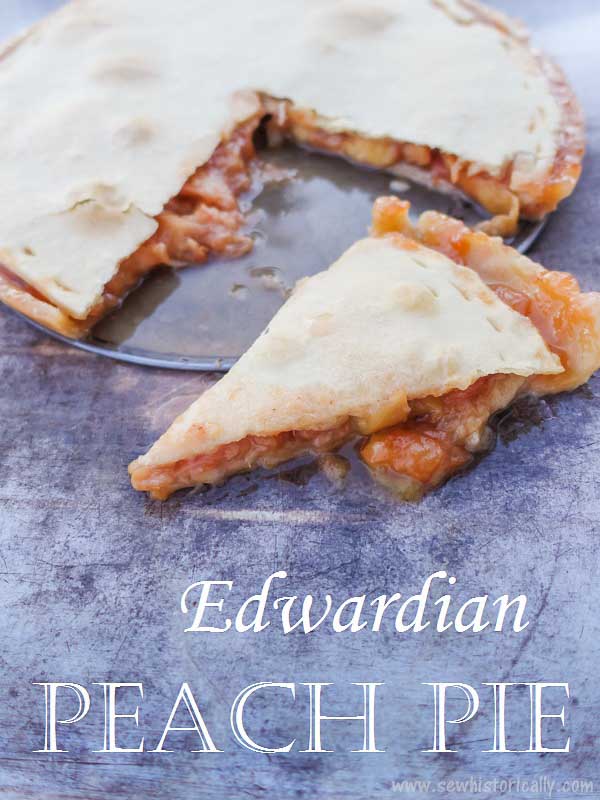