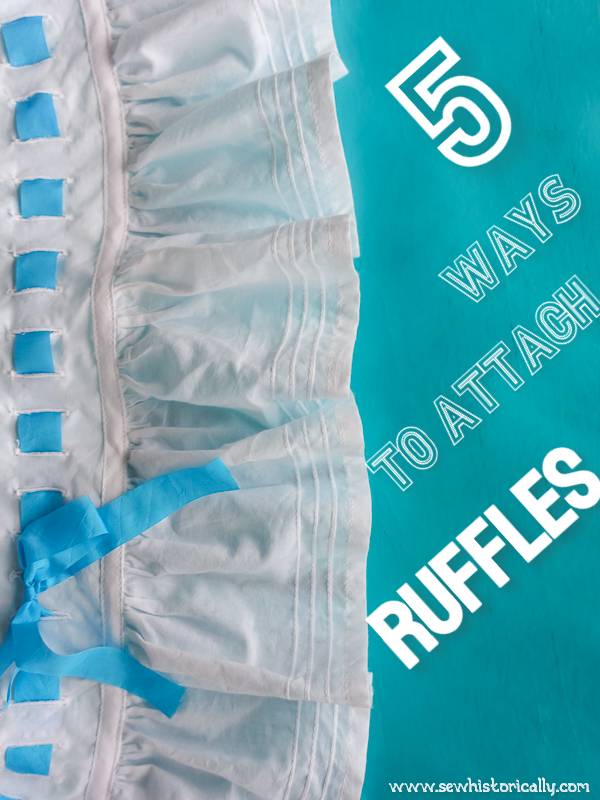 In the Edwardian era, there were 5 ways to attach ruffles: with a receiving tuck, flat felled seam, finishing braid, French seam or whipped gathers. The first four can be sewn on a sewing machine, while the last one is sewn by hand. All these techniques have in common that the right and wrong side of your skirt looks tidy: there are no raw edges on the wrong side and the skirt is also much more durable than if you‘d use zigzagged or serged seams to attach ruffles.

The following 5 historical ways to attach ruffles can be used to attach ruffles cut on the bias, ruffles cut on the straight grain and circular ruffles. In the Edwardian era, ruffles were used on skirts, dresses and underwear – like chemises, drawers, petticoats, slips and combination suits – but apart from dresses, skirts and lingerie there are so much more options today for what you can use ruffles for: tops, blouses, coats, children‘s dresses, pillows, curtains, rugs etc.

Related: 6 Ways How To Insert Lace

Whipped gathers are the most delicate way to attach ruffles so it‘s particularly suitable for delicate materials, like Edwardian summer lace dresses. But the other four ways to attach ruffles are faster to make because you can use your sewing machine to attach the ruffles (but if you want, you can also sew them by hand – finishing braid, felled seams and French seams were sometimes still sewn by hand in the 1900s).

Attaching ruffles with a French seam is the last of the Edwardian ways to attach ruffles. I like this way to attach ruffle the least: Because you have to iron the seam after each washing so the French seam lies flat and the skirt hangs the right way.

How To Make A Ruffle

1. To make a ruffle, cut long strips on the bias or straight grain of fabric. Then join the strips with flat felled seams until the fabric strip is as long as you need it for your ruffle. Ruffles are usually about 1.5 times the widths of the skirt but skirt ruffles in the early Edwardian era were often longer: about 3 times or even longer!

2. Hem the bottom of the long fabric strip. You can also attach lace or add embroidery.

Related: How To Sew Buttonholes On The Bias

1. With wrong sides together, sew the ruffle and fabric together so that the raw edges are on the right side (similar to when you sew a French seam).

3. Fold a tuck right above the raw edges and fold it down so that the raw edges are encased in the fabric. Secure the tuck with two stitching lines (at the top and bottom of the receiving tuck).

As alternative to the receiving tuck, finishing braid was also often used to cover the raw edges. Finishing braid was usually white or pastel-colored woven cotton tape. But you can also use cotton twill tape or bias binding instead.

‘It is not always necessary to use a tuck. A bias band can be used instead or a beading to cover the raw edges of the ruffle.’ (Clothing And Health. An Elementary Textbook Of Home Making, 1916)

1. Start like you would for the receiving tuck: With wrong sides together, sew the ruffle and fabric together so that the raw edges are on the right side (similar to a French seam).

A flat felled seam was rather used to attached circular ruffles instead of gathered ruffles.

3. Fold the double seam allowance of the skirt inwards and over the raw edges. Then stitch the fabric fold down.

Attaching a ruffle with a French seam is like an ordinary French seam except that one of the fabric piece is the gathered ruffle.

1. With wrong sides together, sew the ruffle and fabric together so that the raw edges are on the right side.

2. Press the seam open, then press so that the right sides of the fabric and ruffle are together.

3. Sew the seam again so that the raw edges are encased in the fabric.

Whipped gathers are the nicest way to attach ruffles but it also takes the longest because you have to attach the ruffles by hand.

‘Whipping is forming gathers by overcasting a rolled edge of fine material, and drawing up the thread.’ (School Needlework. A Course of Study in Sewing designed for use in Schools, 1893) ‘A rolled hem is for fine goods, and is the narrowest that is made.’ (Hand Sewing Lessons, 1901)

1. Gather the ruffle with whipping: Roll the raw edges between your fingers and sew overhand stitches over the fabric roll. Then draw the gathering thread tight. 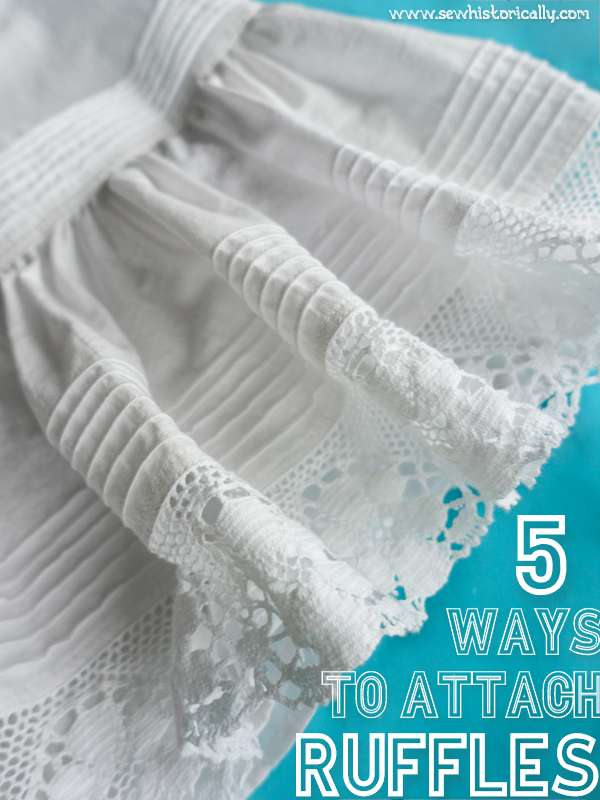