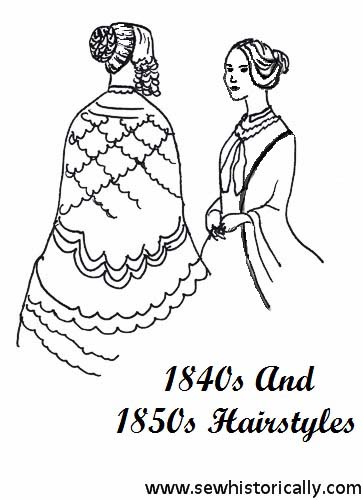 ‘The front hair in bands, with or without the ends braided, and turned up again, or in long full ringlets. The back hair is still worn dresses as low as possible at the back of the neck, in braids, chignons, and rouleaux.’  (1840, Godey’s Lady’s Book) Here’s an 1841 painting and 1842 painting of Queen Victorian wearing a low bun with braided loops over the ears.

The hair is still being worn in full ringlets on each side, the back part tastefully arranged in plaits caught with a handsome comb’ (1843, Godey’s Lady’s Book). Here’s an 1844 photograph of a woman with ringlets and a braided bun worn high on the head. Here’s a similar hairstyle in a painting from 1848. In 1852, this hairstyle was still worn.

Here’s a 1845 photograph of a woman wearing hair loops covering her ears. She also wears her bun a bit lower as in this 1849 painting of a similar hairstyle. The bottom of the hair loop in this 1850 painiting is nearly parallel to the floor, while late 1850s side loops of hair are more sloping. In 1855, the same hairstyle was worn, but with the bun a bit lower. And a variation of the hairstyle: this woman wears a braid over her ears (1853 painting).