Do you want to make a bouffant Gibson Girl updo but you have thin hair? Don’t despair! Here are two ways to make an authentic Edwardian hairstyle with thin hair. No hair rat needed! 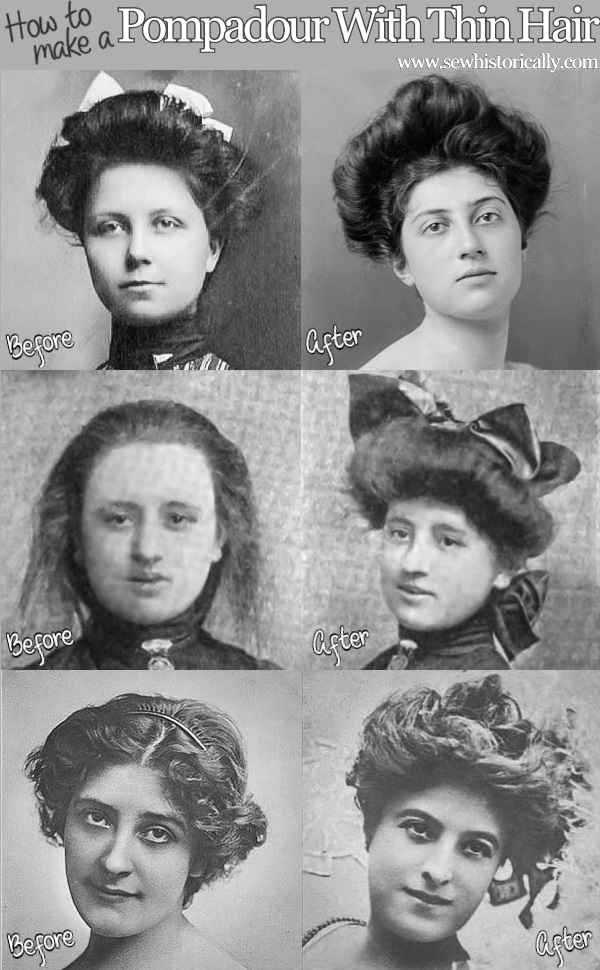 Not all women in the Edwardian era had luxuriant, long and thick hair. Like today, there were women with thin or short hair who struggled to create a fashionable bouffant pompadour hairstyle.

Related: How To Make An Edwardian Wire Hair Rat

‘For the girl whose hair is thin the making of a big, fluffy pompadour has involved much trouble. It has meant the wearing of a “rat,” which has overheated the head and made the hair grow even thinner. Now there is a new method which does away entirely with the “rat” and yet gives the fashionable pompadour.’ (Water Valley Progress, 1903) 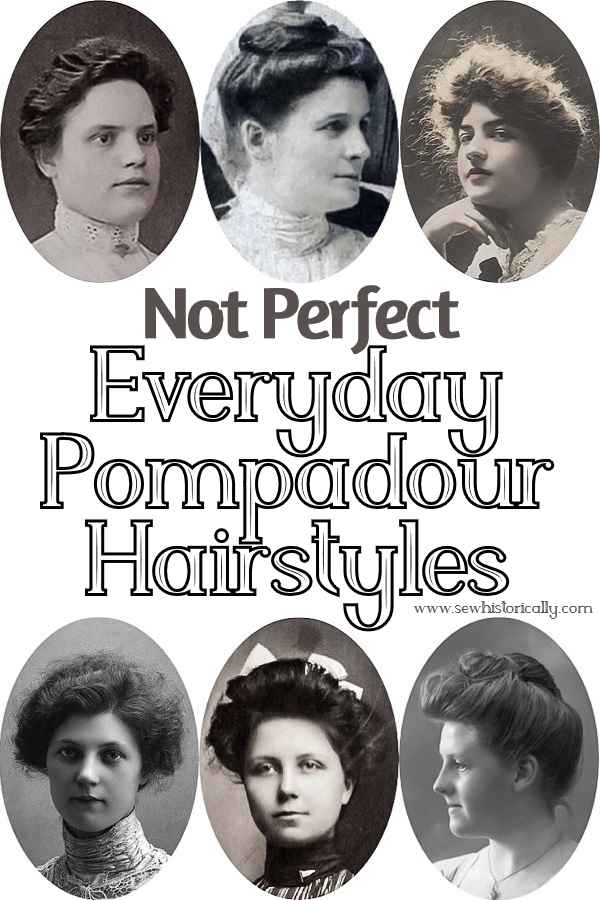 These everyday Edwardian pompadour hairstyles above wouldn’t have been considered perfect in the Edwardian era: the pompadour is either too low or the hair isn’t waved enough or looks too frizzy (because of too much teasing) or is noticeably thin (not enough rats or false hair pieces used).

‘If your hair is thin you can arrange it more becomingly than though it were heavy.’ (The St. Louis Republic, 1904)

Divide The Front & Back Hair

Comb and brush your hair. Then part your hair from ear to ear across the top of the head.

Make A Ponytail With The Back Hair

Now brush the back hair up to the top of your head. And tie the ponytail with a hair elastic.

‘Brush the back hair up, and secure it with an elastic band or narrow piece of black tape. The front of hair is brushed over the forehead, to be combined with the back hair later on in making the pompadour.’ (Water Valley Progress, 1903) 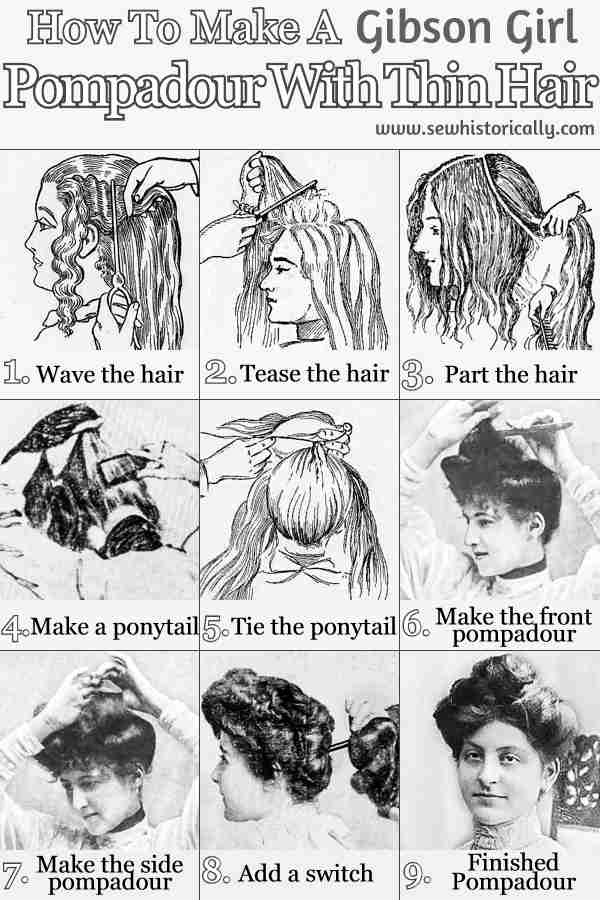 Make The Pompadour Using The Front & Back Hair

Tease each hair section. Then brush each section upwards forming a large puff or pompadour roll over your forehead and ears. Alternatively you can also roll the hair inwards because you don’t need the rest of your hair.

Secure the hair in place with hair combs or bobby pins. If you have long hair just tuck it away under the pompadour because you don’t need the remaining hair.

The remaining strand must also be combed and fluffed and drawn back; the ends of the three strands are now pinned together and tucked up under the pompadour.’ (Water Valley Progress, 1903)

Use A Switch For The Back Hairdressing

For the back hairdressing you need a hairpiece (hair switch) matching the color of your hair. You can use the switch to make a bun, chignon, puffs, curls, a Psyche knot or milkmaid braids –  all were popular updos in the 1900s. But the most popular updo in the Edwardian era was the figure 8 bun.

Related: How To Make An Edwardian Pompadour With Figure 8 Bun

‘Though the average girl may not like the idea of wearing false hair, yet it is really much more sensible to wear a switch than a rat, especially when the switch is not to be arranged high on the head. Pin the switch to the hair just about where the ends of the front hair were tucked under and fastened.’ (Water Valley Progress, 1903)

Wave your hair. You can either use curling irons. Or you can wave your hair using the Edwardian heatless zig-zag pin curl method:

‘Thin hair should be waved with the irons first to make it fluffy and then brushed out before rolling.’ (San Francisco Call, 1907) ‘A woman who possesses only a wisp of hair may fool her friends into the belief that she owns a luxuriant growth’ by teasing her hair. (The Washington Times, 1902)

Now comb the hair straight back. Then push the front hair forward over the forehead with a hair comb. You can either use a large comb or three combs: one for the top and two side combs.

‘Gently push the front part forward with the comb until it stands up in a pompadour shape. Place a pompadour comb on the top of the head to hold this front hair up – the teeth of the comb should be forward.’ (Evening Star, 1904)

Finally, put the back hair up into a figure 8 bun.

‘Draw the whole hair to whatever point at the back of the head you find most becoming for the upper part of the figure eight. Coil it and pin it there.’ (Evening Star, 1904)