Learn how to make a tallow candle with kitchen waste and a DIY wick made from natural materials! Tallow candles are great as emergency candles and for the holiday season. 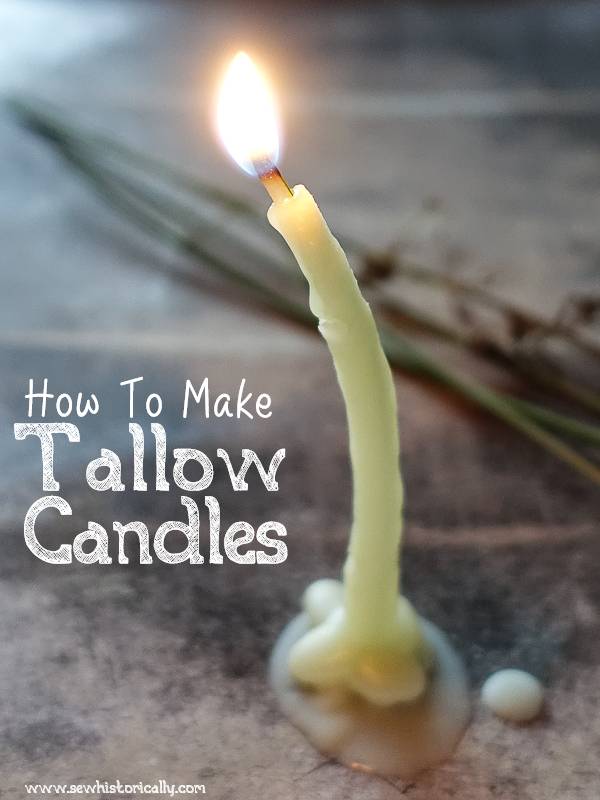 Tallow candles have a long history. They were the most widely used candles since ancient times before paraffin and stearin were discovered in the Victorian era. Tallow candles were a cheaper alternative to expensive beeswax candles.

While tallow candles could already be bought at shops in the Middle Ages, tallow candles were often made at home: Because tallow and other animal fats were readily available in households. As wick they either used cotton string or dried rushes. Read on to find out how to make a molded or dipped tallow candle with a DIY cotton or rush wick.

Tallow (beef fats) is solid at room temperature, so it’s perfect to make DIY candles. Tallow is softer than beeswax. But it burns slowly and gives good light. By the way, to make an emergency candle with beef fat, you can also save the fat from bone broth.

Some tallow smells really bad – especially if it isn’t rendered completely or has become contaminated by moisture – while other tallow has hardly any smell at all. While burning – and even after blowing out – my DIY tallow candle with a rush wick smelled less than store-bought stearin or paraffin candles.

‘Tallow-candles are of two kinds, “dips” and “moulds.” Dips are made by dipping the wick repeatedly in melted tallow; allowing a sufficient time to elapse between every operation, in order that each coat may consolidate.

Mould-candles are usually made in pewter moulds, although glass moulds have been lately introduced. The mould consists of two parts, a cylinder and a conical cap, which is perforated to allow a passage for the wick. Several of these moulds are fixed in a wooden frame’ (Exhibition of the Works of Industry of All Nations 1851, 1852) ‘It is requisite that the tallow should completely fill the mould, that it should remain uncracked on cooling […] Moulding by hand is a very tedious operation, and only practised in the smaller factories’ (The Art Of Manufacturing Soap And Candles, 1867).

‘Dipped candles give the most light […] mould candles, though having a better appearance, and being less liable to run, do not give quite so good a light.’ (An Encyclopaedia of Domestic Economy, 1844) ‘A mould candle will burn half an hour longer than a dipped candle of the same size, and give rather more light.’ (Popular Errors Explained and Illustrated, 1856)

Since medieval times, wicks for candles have always been made of cotton. And since the Victorian era, wicks for wax candles have been braided because braided wicks bend at the end and are therefore self-consuming.

Wicks for tallow candles, on the other hand, were simply twisted instead of braided because tallow candles require straight wicks that don’t bend at the end. The tallow candle is ‘of immense antiquity. It is the only candle now without a plaited wick.’ (The Health Exhibition Literature, 1884)

Wicks for tallow candles ‘are very loosely twisted, and form a kind of hollow tube.’ (The Art Of Manufacturing Soap And Candles, 1867) ‘The wick should not be twisted too much, for if it be too compact the oil will not rise readily in it; nor should it be too loose, for this will cause the capillary attracting power to raise too much oil.’ (An Encyclopaedia of Domestic Economy, 1855)

Related: How To Make DIY Wicks With Cotton String

Apart from that, wicks for tallow candles have to be thicker than wicks for wax candles: ‘Tallow having a comparatively low melting point requires thick wicks.’ (A Practical Treatise on the Manufacture of Soap and Candles, 1888) If the wick is ‘not sufficiently thick it is apt to incline downwards and fall upon the candle; or if it remain upright it does not attract a sufficient supply of melted tallow for the combustion: when it is too thick, though a sufficient quantity of melted tallow may be attracted and consumed, the illuminating effect is diminished in the same way as when it is too long’ (The Edinburgh Journal of Science, 1830). For night lights ‘by making the wick small, they may be made to give as little light as is required.’ (An Encyclopaedia of Domestic Economy, 1855)

To make tallow candles burn longer the wick should be dipped in beeswax before dipping it into tallow according to the book Georgica Curiosa from 1682: This was called a plated candle. 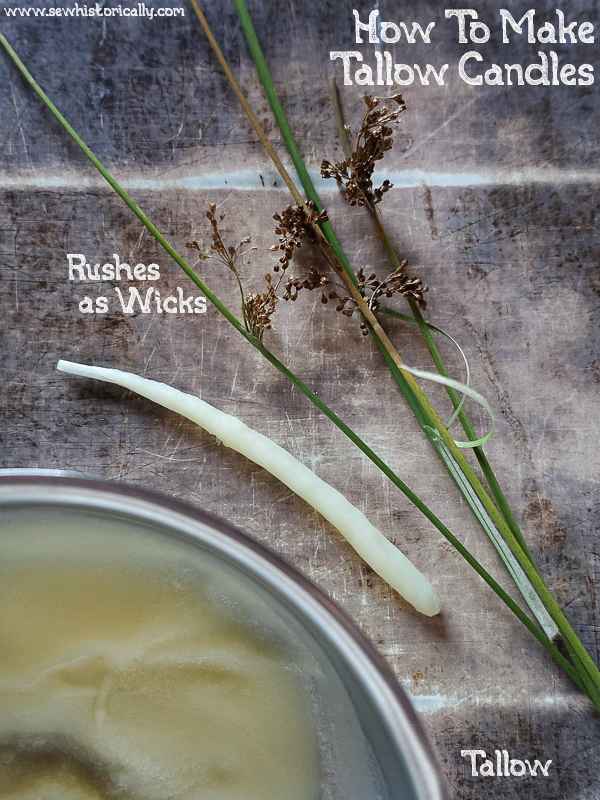 Rush candles ‘are the same as ordinary tallow-candles, except that they have a rush in the middle instead of a cotton wick.’ (Archaeologia Cambrensis, 1890) ‘A rush, deftly stripped of its skin, of which a slender streak is left to act as a kind of backbone to the tender pith. A number being thus prepared, are allowed to become thoroughly dry, by hanging in an airy loft.’ (The Photographic News, 1883)

How To Make Dipped Candles With Tallow

‘These candles, technically termed “dips,” in contra-distinction to “moulds,” are made by stringing a certain number of wicks upon a rod, and dipping them in melted tallow, repeatedly, and at intervals of sufficient duration to allow the successive layers of tallow to harden. When the candles have acquired the desired size by these repeated coatings, they are finished. […]

It is impossible to prescribe the exact number of dips that should be given to the candles, as it depends upon the size they are to have, and on the temperature of the tallow. […] At the last dip, the workman forms the neck of the candle by plunging it deeper into the tallow; and, by thus imbuing the tip of the wick which has not been previously soaked’ (A Treatise on Chemistry Applied to the Manufacture of Soap and Candles , 1856)

How To Make Tallow Candles With Rush Wicks

Rushes are ‘tied by the tops in little bundles of four or six, which are held in the hand, being kept apart by the intervention of the fingers. Thus disposed, they are discreetly immersed in the tallow, of a temperature just high enough to preclude solidification in bulk, yet to insure a sufficient portion adhering to the cold rushes. After two or three dippings, the candle is complete.’ (The Photographic News, 1883)

For the candle you see in the photos I made a dipped tallow candle with a rush as wick. I dipped the the rush about ten times in melted tallow. As soon as the tallow on the rush wick turned white – this took a couple of minutes – I dipped it again in melted tallow. My finished DIY tallow candle was about 4″ (10cm) long and burned for three-quarters of an hour. Like the Victorian texts said, the rush wick really is self-consuming: so no need to trim the wick.

‘Though primitive, the rush-light taper must not be despised, for it possesses certain advantages. In the first place it can be made very cheaply, children can pick and peel the rushes, and the fat used is a product of the farm. All waste fat from sheep or pigs is collected, and when enough has accumulated it is boiled down for use. Secondly, it requires no snuffing like an ordinary tallow candle; and thirdly, no grease drops about when it is carried.’ (Journal, 1886)

‘By careful experiment, it has been proved that the flame of a tallow candle is far more brilliant than that of wax lights’ (Popular Errors Explained and Illustrated, 1856).

‘The great fault of tallow candles, dips, or moulds, is their tendency to gutter, and to exhale evil odors when blown out; also, the necessity for snuffing them.’ (The Photographic News, 1883)

Tallow candles are also naturally softer than wax candles and they made the fingers greasy. See below how these problems were resolved in the past. 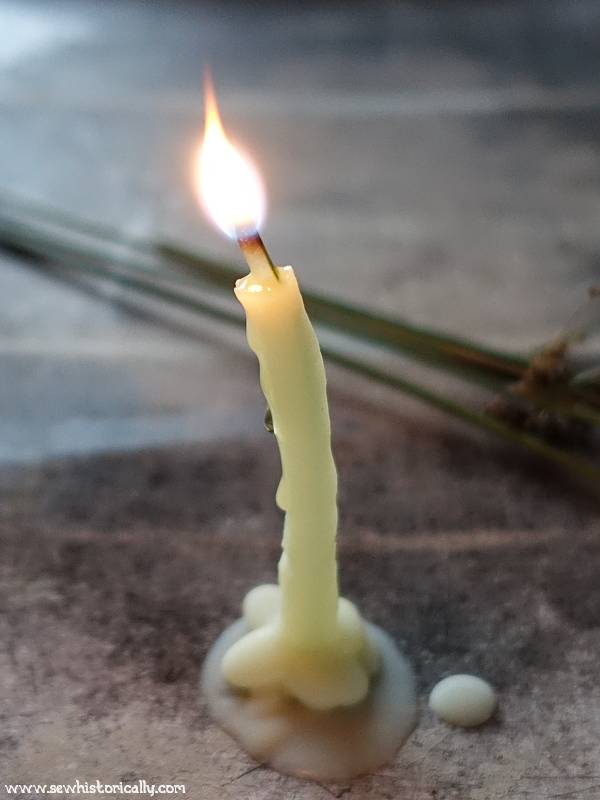 How To Improve Tallow Candles

‘Effectually to prevent them from greasing the fingers in handling them, they are covered over with a varnish of glover’s size, gum, and alum. Candles made in this manner are nearly equal to wax.’ (An Encyclopaedia of Domestic Economy, 1855)

‘Perfumed candles are made in Paris. The tallow, purified, is run into buckets of water distilled from aromatic herbs, as lavender, thyme, rosemary, &c.’ (An Encyclopaedia of Domestic Economy, 1855)

How To Bleach Tallow Candles

‘Dips or moulds, as made from common rendered tallow, have a yellowish shade when first made, but they soon bleach by time and exposure.’ (A Treatise on Chemistry Applied to the Manufacture of Soap and Candles , 1856) To whiten a tallow candle, hang it in an airy ‘ loft, and in about a months of favourable weather is ready for sale.’ (The Photographic News, 1883)

‘Some bleach or whiten their candles, by hanging them out in the dew, or earliest rays of the sun, for eight or ten days, care being taken to screen them in the daytime from the heat, and in the night from rain, by waxed cloths.’ (An Encyclopaedia of Domestic Economy, 1855)

How To Store Tallow Candles

‘Tallow candles […] resist decomposition for a long time, and will keep for two years […] it is found good practice to keep them covered up with bran.’ (An Encyclopaedia of Domestic Economy, 1855)

‘When tallow candles are used, the quantity of light produced will depend much on the attention that is paid to the management of them. […] a tallow candle which is suffered to burn with a long wick consumes more than twice as much tallow in producing any given quantity of light as when the same candle is kept well trimmed. […] a tallow candle consumes faster when it burns dim and gives little light than when it burns well and furnishes a great deal of very pure light.’ (The Complete Works, 1875)

‘It is also necessary, in trimming, that the wick should be cut perfectly level with scissors; any ragged bits on the edge of the wick occasion the flame to be uneven and to smoke in some places.’ (An Encyclopaedia of Domestic Economy, 1855)

‘We may here simply notice the Soho lamp, patented a few years ago, for burning solid tallow or some other kind of fat. The tallow is brought to the form of a long cylinder like a candle without a wick, and is placed in the vertical stem of the lamp; there is a spiral spring beneath it, which presses it up close to a conical cap of cover at the top.

A fixed tube passes up through the centre of the cylinder of tallow, from top to bottom; and in this tube is placed a cotton wick dipped in wax, the height of which above the top of the tallow can be regulated by a rack, pinion, and nut.

The tallow or fat is made into a hollow cyclinder in order to leave room for the central tube containing the wick. When the lamp is to be extinguished, the wick is drawn down below the top of the tube, and again raised before the tallow becomes cold.’ (The English Cyclopaedia, 1861)

How To Make Tallow Candles – In A Nutshell 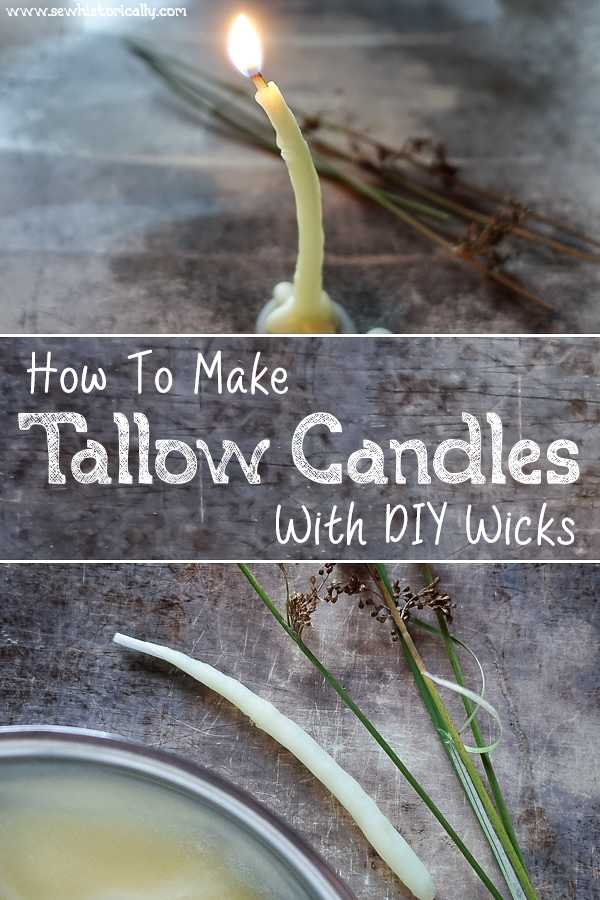 7 thoughts on “How To Make Tallow Candles”