Reduce your food waste and turn watermelon rinds into easy, tasty and healthy recipes. More than 15 sweet and savory watermelon rind recipes for you to choose your favorite! 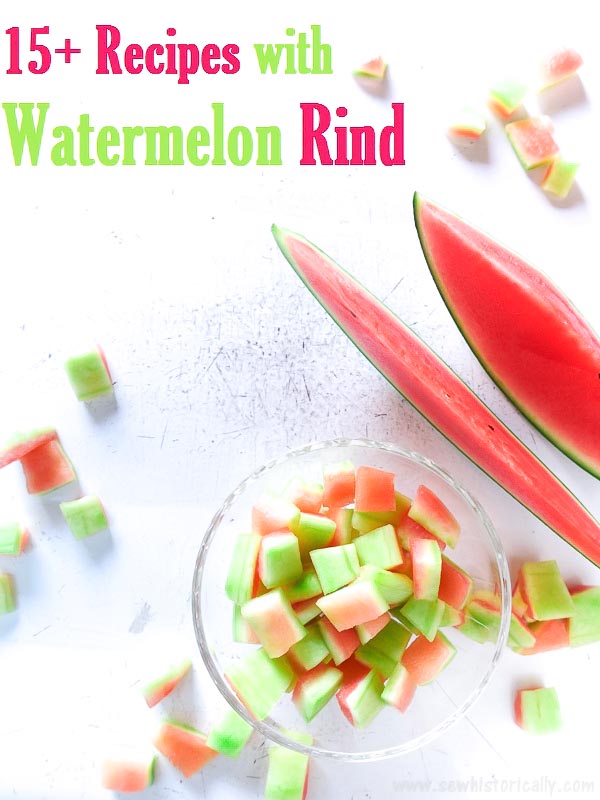 How To Prepare Watermelon Rind For Cooking

If you don’t want to use the watermelon rind immediately, put it in cold or salted water and let it soak at room temperature or in the fridge until you’re ready to use it. Watermelon rind freezes well too!

Grate the watermelon rind or puree the diced rind in a food processor or with an immersion blender. Pour milk, grated watermelon rind and sugar into a saucepan and while stirring occasionally simmer over medium heat for about 30 minutes until the watermelon rind pudding has thickened and the rind is tender. Don’t worry the pudding looks curdled because of the fruit acid but it’s still delicious.

‘A beautiful dish for a company supper table.’

‘Put the gelatine to soak in enough cold water to cover it. Leave it in a warm place. In the meantime butter slightly the inside of a mould, and select handsome pieces of preserved fruit of several kinds wherewith to garnish it. Use ginger, watermelon rind, cherries, plums, and anything else that is firm and of a rich color and pretty shape. Lay these around the edges of the mould.

Mix the milk, cream and sugar together, and whip to a froth. When light and thick, beat in the syrup of the different fruits (a little of each), and mix in gently more of the fruit such as you used in garnishing.

Then dissolve the gelatine, adding a very little boiling water to it if necessary. Strain it into the whipped cream, stirring all the time quickly, but lightly, with your whisk. Let it stand a few moments until it settles. Put it into the mould carefully, a little at a time, so as not to displace the fruit in the mould. Put in a cold place for three or four hours, when it will be stiff enough to turn out.’ (How To Cook Well, 1886)

make a syrup of ten pounds of sugar and six quarts of boiling water, boil and skim, then add the melon rind, and slowly simmer till tender; skim out the rind, place it on draining sieves for two hours in a warm place to set; when hardened place into cold crocks; boil up the syrup again with the sliced peel and juice of eight lemons and two ounces of sliced ginger, boil ten minutes, then strain over the fruit in the crocks.’ (The Culinary Handbook, 1904)

How To Can Watermelon Rind

‘Pare off the thin green rind, cut into pieces 1 in. square, or into strips, stand in cold water for two or three hours, changing the water occasionally; drain thoroughly, make syrup of 1 pt. water to 1 or 1 1/2 pt. sugar, according to the richness desired. (3 or 4 tablespns. of lemon juice may be used with the larger quantity of sugar). When syrup is boiling, add rind, simmer until pieces can be pierced easily with a broom straw, or until they are clear, put into jars and seal.

One part raisins to five or six of the rind gives a nice flavor. Or, orange flowers, rose leaves or rose water may be used, but the fruit is nice without any flavoring.

Green melons which did not have time to ripen before the frost, are excellent prepared in this way. The rind may be steamed before putting it into the syrup, and less water used for the syrup.’ (The Laurel Health Cookery, 1911)

In a saucepan, bring sugar and water to a boil. When the sugar is dissolved, add the watermelon rind and lemon slices. Simmer for 20 minutes, stirring occasionally. Remove the candied watermelon rinds from the syrup and let them dry overnight on oiled plates or baking paper. The leftover lemon-watermelon syrup is delicious too: Use it for lemonade, iced tea or ice cream.

‘Use your own preserves. Peach, pear, apple, quince or watermelon rind will do. Drain from the fruit all syrup possible. Cut any size desired, sprinkle with sugar, and dry in the warmer or a very slow oven. It may be necessary to sprinkle the fruit again with sugar during the drying. When dry enough not to be at all sticky, sprinkle with sugar and pack in layers with wax papers between. This fruit, as well as dates and citron, may be used for dipping in bitter chocolate for bitter-sweets.’ (The Institute Cook Book, 1913)

‘Pare the rind and lay it in cold water for an hour or two, then put it in fresh cold water, and let it come to a boil. Put it in cold ginger tea and let it remain all night. Then put it in fresh ginger tea, made with the same ginger, and boil it till you can pass a straw through it. Drain it through a cullender; weigh the rind and chop it fine. Allow three-quarters pound sugar to a pound of the rind, and boil it clear. One lemon will season two pounds of rind, half pound ginger will season six pounds rind. Divide the ginger and make fresh tea, instead of using the other.’ (Mrs. Charles H. Gibson’s Maryland And Virginia Cook Book, 1894)

Soak the rice and watermelon rind for at least an hour, then drain. Blend the rice, watermelon rind and water in a food processor or with an immersion blender. Let the batter stand overnight at room temperature.

Stir the salt into the watermelon rind pancake batter. Heat oil or butter in a pan, pour a ladle full of the pancake mixture into the pan and bake on both sides until golden brown.

‘Cut the watermelon in two parts, remove the central or red part, then after removing the outside skin, and all the red part of the melon, cut in very small pieces, and cook in plenty of water until very tender; add the juice and a little of the grated rind of a lemon, sugar to taste, and a little vanilla. If desired, use 1 teaspoonful of corn-starch for each pie. Rub the starch smooth in a little cold water before adding. Cook until the starch has time to thicken, then place in a pie-tin lined with a nut paste. Bake with two crusts.’ (Guide For Nut Cookery, 1898)

Stir together flour, chickpea flour, water and salt. Let the mixture stand for about 10 minutes. Meanwhile, salt and pepper the watermelon rind. Dip the watermelon rind pieces in the flour mixture, then roll in the breadcrumbs and deep-fry in hot oil until golden and crisp.

‘Cut the rind in small pieces, peel, and remove all the red parts, cover with cold water, and let stand for several hours. Boil in water till clear. Now lift out, drain well, and place in a large basin.

Put the vinegar into a saucepan, add the sugar and spices, boil for ten minutes, then pour at once over the watermelon rind. For three days in succession pour this mixture boiling hot over the rind. Seal in sterilized jars.’ (Canning, Preserving And Pickling, 1914)

‘Cut some watermelon rind into pieces about two inches square. Soak them in a weak brine over night, then rinse and drop into a strong alum water. Put the sugar, vinegar, ginger root, and cinnamon sticks to taste into an enameled saucepan and cook to a syrup.

Drain the watermelon rinds and pour the syrup over them. Scald the syrup for three mornings, always pour it boiling hot over the rinds, then add the cherries and divide into sterilized jars. Seal tight.’ (Canning, Preserving And Pickling, 1914)

‘Wipe the cucumbers and martinoes with a damp cloth. Cut the cucumbers lengthwise into quarters, and the martinoes into halves. Scald and peel the onions; wash the cauliflower, watermelon rind, and beans; break the cauliflower into small pieces, and cut the melon rind about the size of the pieces of cucumber. Dissolve the salt in the cold water. Put the pickles in a large earthen or tight wooden vessel, and pour the brine over them; if they are not covered, add more cold water. Put a large earthen plate over them, with a clean brick or stone to keep them under the brine. Let them stand two days, remove them from the brine, and wash in cold water.

Wash and scrape the horseradish root. Pack the pickles in a stone jar or firkin. Put all the spices into a bag made of strainer cloth. Boil the vinegar, spices, and alum in a porcelain kettle ten minutes, skim carefully, add the boiling water, and pour immediately over the pickles. If a stronger spice be desired, leave the bag on the top of the pickles. Set them in a cold place, with the plate and weight over them to keep them under the vinegar. In about two weeks add the alcohol, and in four weeks they will be ready to use.’ (Mrs. Lincoln’s Boston Cook Book, 1903)

-> How To Make Vinegar From Scratch With Kitchen Scraps 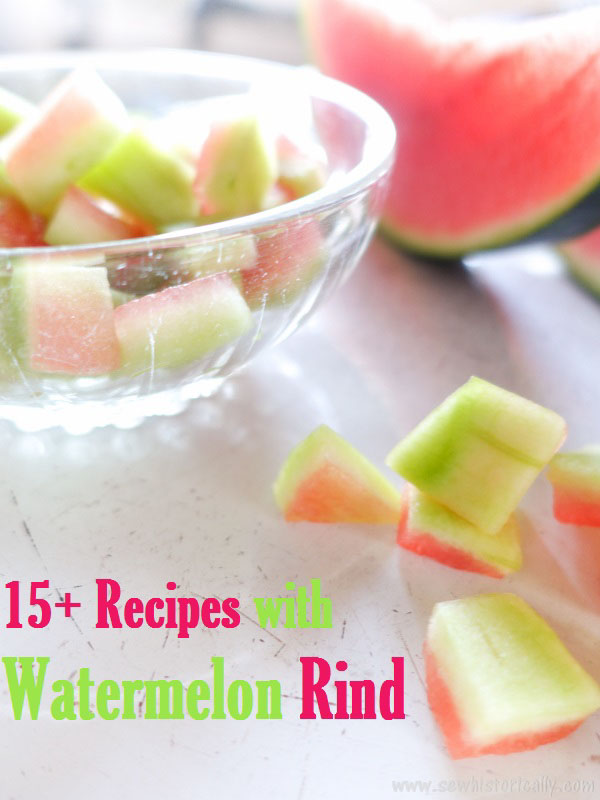