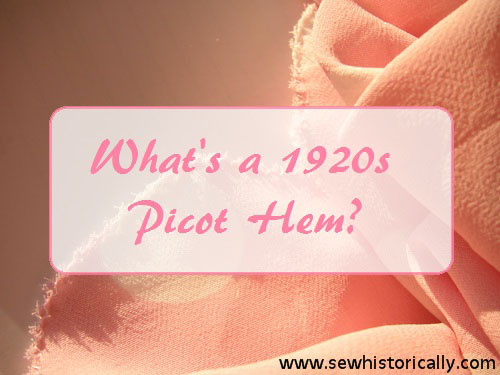 In the 1920s, the hem of sheer and lightweight dresses were often finished with a picot hem. Nowadays, the term ‘picot hem’ is often used wrongly. So what’s a real 1920s picot hem?

A picot hem is a hemstitch cut through the middle. In the 1920s, you obviously had your dresses hemstitched for money, according to this 1920s source: ‘Many of the daintiest summer frocks for the young girl are […] trimmed in machine picoted ruffles of self-material. The machine picoting […] is machine hemstitching cut through the center as shown in sketch 1. The charge for this work is made by the yard, and there is a great saving in planning picoting so that both edges of the hemstitching may be used’.

Here you’ll see a picot edge used on the jabot of a 1920s silk chiffon dress. And for this pretty 1920s floral chiffon dress it’s used as hem finish.

In 1921, machine hemstitching ‘is used on blouses, dresses, lingerie, etc., to put together seams, finish hems and put on trimmings such as bands, etc. It is neat, durable and gives a garment a dainty, finished look. […] Prices for the work vary, but it is not expensive. It can not be done at home, as the machine required is too costly’. All the lines and seams are basted in self-colored thread before the garment is sent to the hemstitcher. A foundation of silk muslin or thin lawn is necessary for bias edges and thin materials, such as net, chiffon and lace. ‘Picot edging is simply machine hemstitching cut through the center. It makes a very dainty and yet strong finish for edges of collars, sleeves, tunics, ruffles, sashes, etc.’

Commercial hemstitching seems still to be available in the 1950s, according to this great source: ‘A picot-edged hem, which is very satisfactory, is done by having bottom edge of garment commercially hemstitched. […] Placing a strip of tissue paper under fabric, make a line of basting along marked hemline, stitching through tissue. Have commercial hemstitching done over basted line. Remove paper only after hemstitching is done. Cut as shown.’