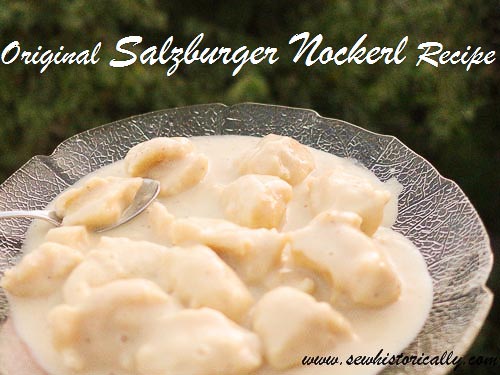 For the Historical Food Fortnightly challenge 19 – Ethnic Foods, I made two Austrian desserts: Salzburger Nockerl and Kaiserschmarrn. Both recipes are original Victorian recipes: from the 1840s and 1850s. I’ve often made modern Salzburger Nockerl and Kaiserschmarrn, but I’ve never made the original historical recipes – so I was curious how they’d taste compared to the modern recipe versions. 😀 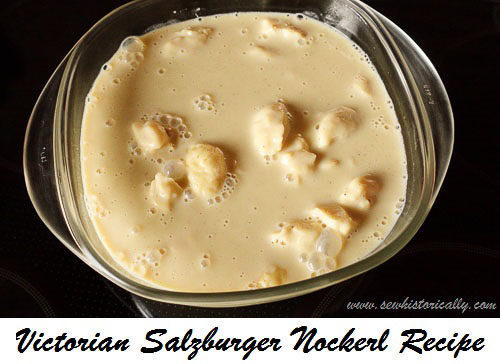 I combined the two Victorian Salzburger Nockerl recipes above, so here’s the recipe I made:

Make a choux pastry: Boil water, butter, salt and sugar. When boiling, stir in the flour. When still warm, beat in the egg and egg yolks. 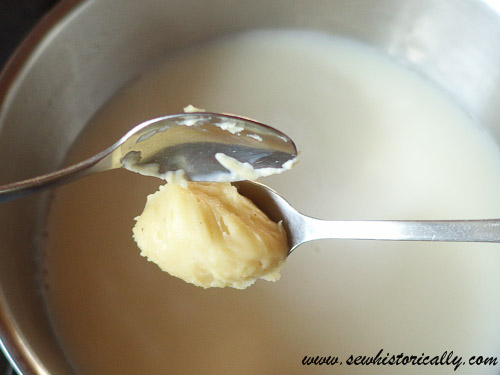 Bring the soy milk-water (or milk) to a boil. Make small dumplings with two teaspoons and boil them for some minutes in the milk. 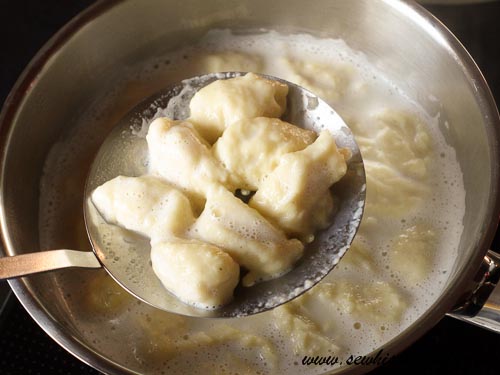 When the dumplings rise to the top, they’re ready. 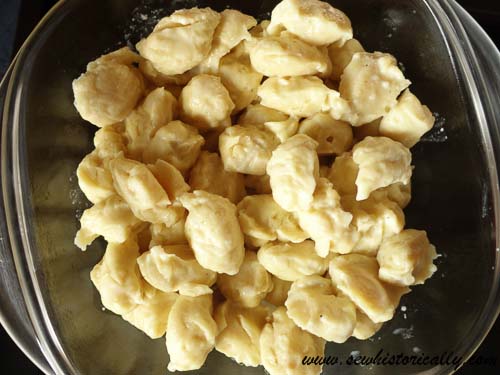 Put the dumplings into a glass baking dish. Optional: Preheat the oven to 180°C. 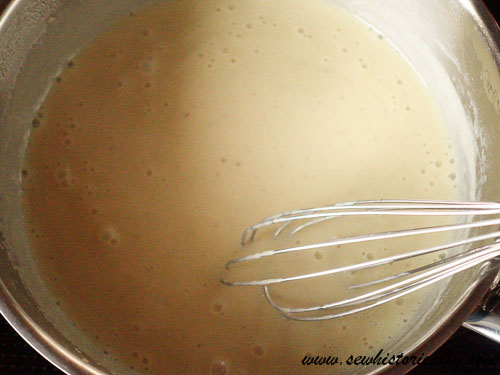 Make a custard sauce with the remaining soy-milk-water, egg yolks and vanilla sugar. 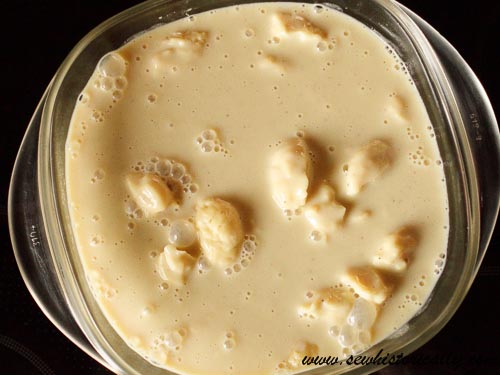 Pour the custard sauce over the dumplings. Serve them immediately or put them for some minutes into the oven. The recipe says to put the Salzburger Nockerl into the oven, but it’s not necessary when they’re served immediately.

Sprinkle with sugar before serving (this is optional as the Salzburger Nockerln are already sweet enough). 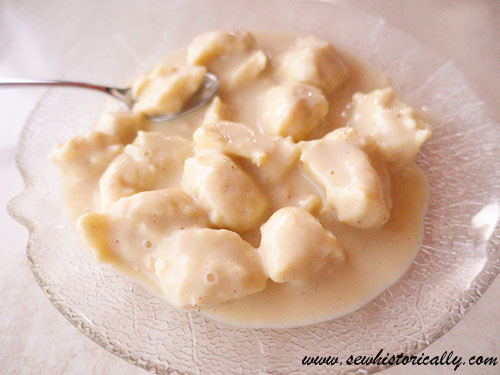 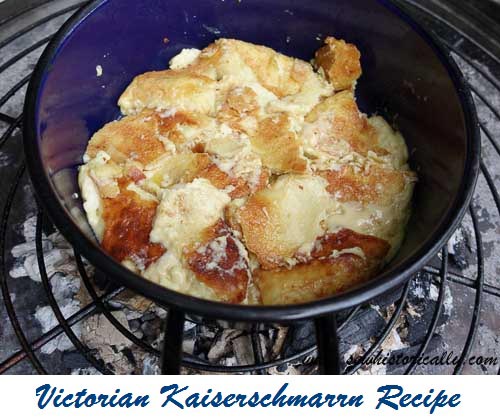 Kaiserschmarrn – Emperor’s Mess – is an Austrian dessert or sweet lunch, a shredded pancake named after Franz Joseph I, Emperor of Austria (1830-1916). Originally, Schmarrn was an Austrian poor man’s food, sometimes just made with flour and milk. But Kaiserschmarrn is more fancy: made with eggs, flour, cream and butter.

Kaiserschmarrn was made in a ‘Rein’ – a skillet or frying pan with three legs – over open fire. Here’s a picture of a 19th century three legged skillet. Sometimes Schmarren (1849 Recipe: Abgetriebener Schmarren) was baked in a pan with closed lid and coals on top, similar to Dutch oven cobbler. 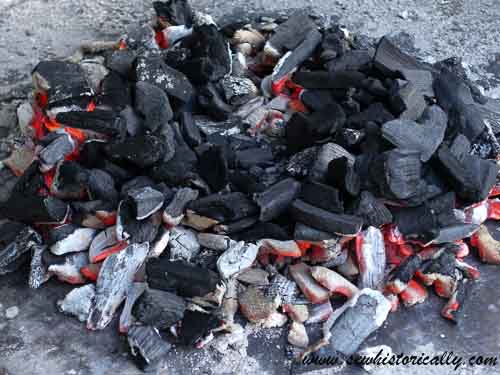 I decided to make the Victorian Kaiserschmarrn over an open fire, just like the recipes says. Instead of a ‘Rein’, I used a Dutch oven without the lid.

My dog was always close by the fire to help with the cooking. 😉 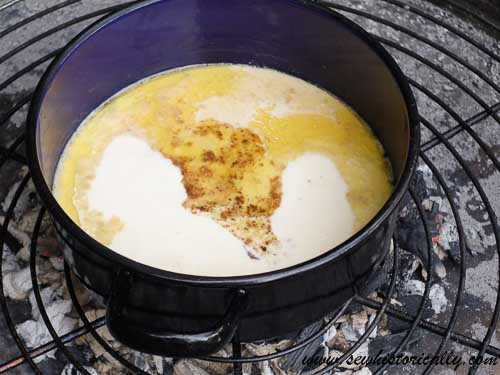 I tried out two of the above recipes, one is adapted slightly to make it dairy-free. 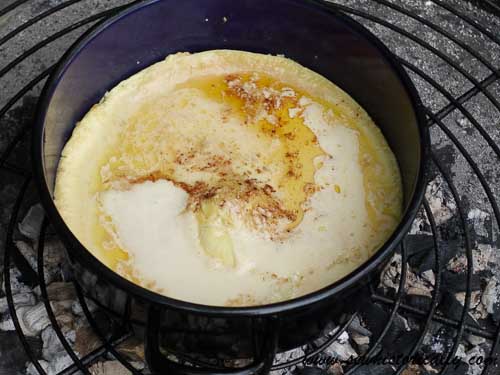 Make a thin pancake batter with milk (cream), flour and salt; then stir in the eggs. Melt butter in a skillet. Bake the Kaiserschmarren until golden brown, turn over and bake the other side until golden brown. 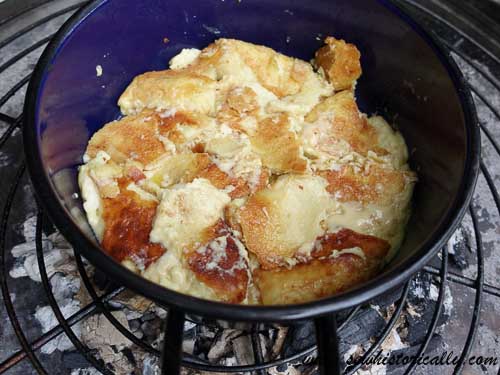 Then tear the pancake into pieces and sprinkle with sugar. 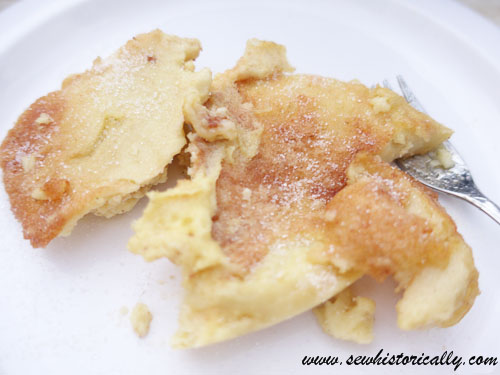 Both Victorian Kaiserschmarrn were delicious, and very easy to make – a perfect campfire dessert. 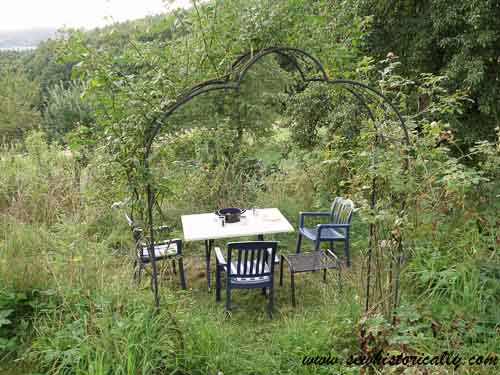