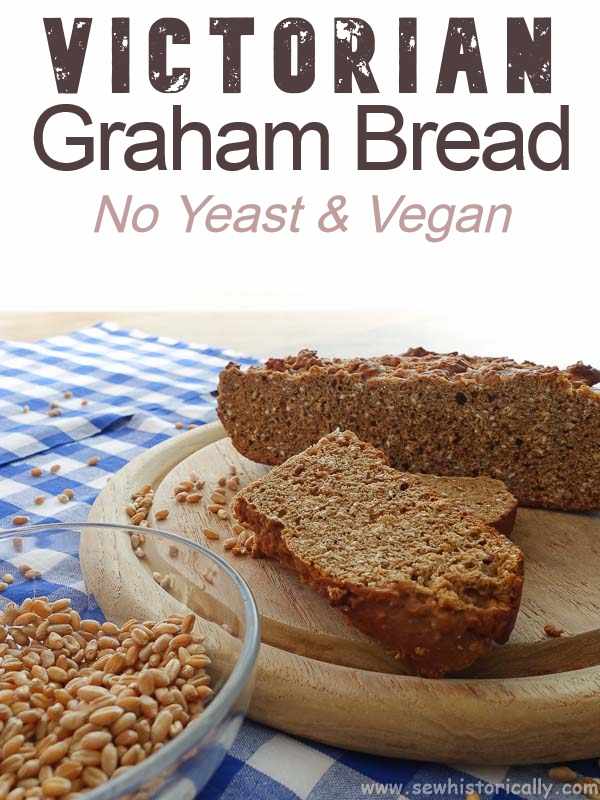 In the Victorian era, Graham bread was promoted as healthy bread. Graham bread is named after Sylvester Graham, a minister and dietary reformer. Victorians preferred white bread, whereas whole-wheat bread was considered rural and therefore inferior. Graham, however, argued that white bread is unhealthy because it was usually made from bleached whole-wheat flour at the time. No wonder that he propagated Graham bread as healthier than faux white bread that is loaded with toxic chemicals!

This Victorian Graham bread is a quick bread made with only 5 ingredients! The bread is rather dense and tastes very sweet because of the molasses. It’s more like German honey cake or medieval Nürnberger Lebkuchen than bread!

In the mid-Victorian era, there was also a trend that bread should be made without yeast. No-yeast bread is the healthiest bread, according to Victorian dietary reformers! While some Graham bread recipes are made with yeast, there’s also a quick bread version without yeast. This Victorian Graham bread is leavened with baking soda and molasses instead of yeast.

‘Some graham […] breads are made without yeast, baking powder or soda, and cream of tartar is used for raising, also buttermilk or sour milk and soda, soda and molasses, and also half sponge and soda and molasses, which makes a very nice and moist loaf.

If soda is used, it can be used only with sour milk or with molasses which contains acid, and in the proportions of half an ounce to the quart of molasses and sour milk. Where only small quantities are made, a part of a broken-up wheat flour sponge can be used, some molasses added and graham flour used for doughing.’ (Bakers’ Bread, 1918)

Graham bread is made with graham flour. Graham flour is also a whole-wheat flour but it is made differently. For graham flour, the bran, germ and endosperm are separated before milling and ground separately. The endosperm is ground finely – similar to white flour – but the bran and germ are ground coarsely. This creates a different texture in Graham bread.

I coarsely ground wheat grains in a grain mill and sifted the flour through a coarse stainless steel strainer to extract the bran. Then I combined store-bought white flour, aka all-purpose flour, with the coarsely ground home-milled bran. The ratio I used was 3 parts white flour and 1 part bran. 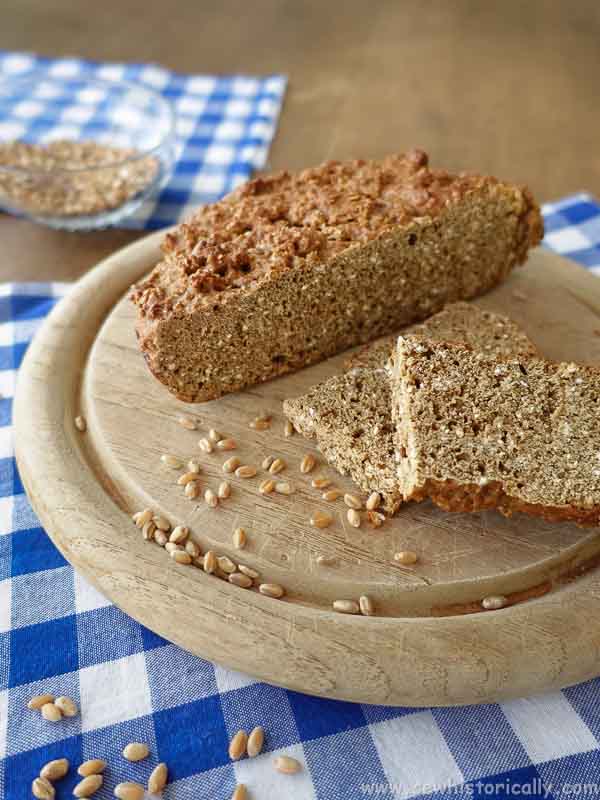 ‘Take four heaping cupfuls of graham flour, one teaspoonful of salt, one-half of a coffee-cupful of molasses, one heaping teaspoonful of saleratus [baking soda]. This last must be dissolved in a little hot water and stirred into the molasses until it foams well. Pour it on the meal, add enough milk to make the dough as stiff as cake mixture; put it into two pans and bake until done.’ (The Ideal Cook Book, 1902)