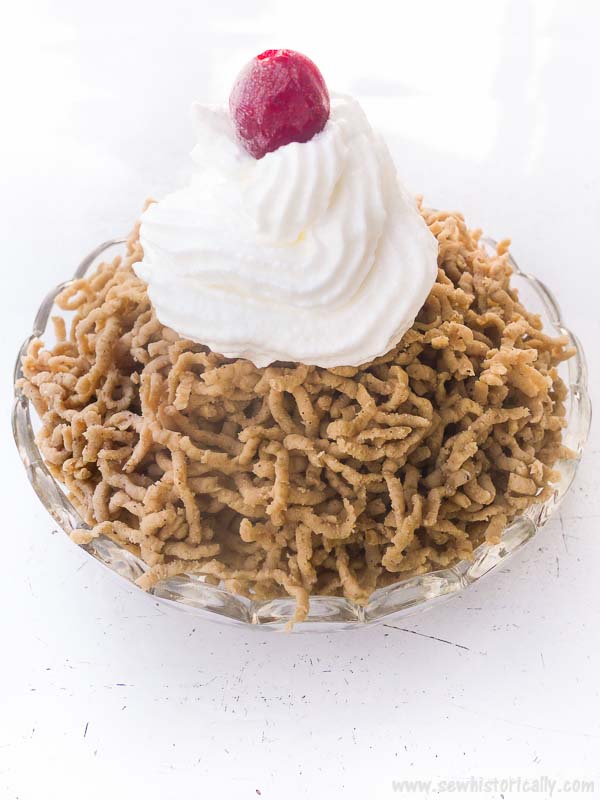 Chestnut vermicelli is a delicious, old Viennese dessert made with just a few ingredients: The main ingredients are chestnuts and sugar. In Austria, chestnut vermicelli is called “Kastanienreis” – chestnut rice – because the dessert resembles rice or spaghetti. After the chestnuts are boiled, they are pressed through a colander which gives them that spaghetti-like appearance.

Press the chestnuts ‘through a hair sieve […] the purée of chestnuts will fall into the dish like vermicelli; – this is the proper shape, and it should not be touched afterwards.’ (The Royal Cookery Book, 1869, p. 209)

It’s not surprising that chestnut vermicelli is a popular dessert in Hungary, too. After all, Austria-Hungary, aka the Austo-Hungarian Empire, was ruled by the House of Habsburg in the Victorian era. In Hungary, the dessert is called “Gesztenyepüré” – chestnut puree. 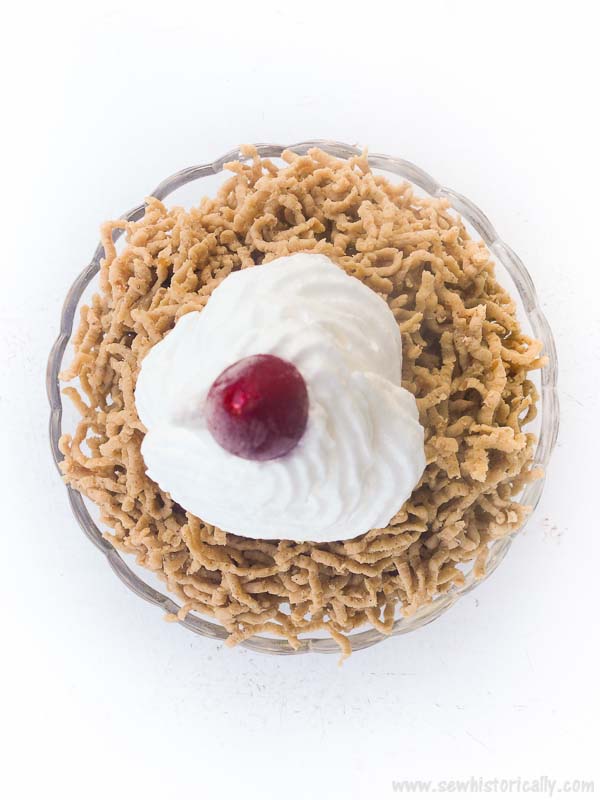 ‘Shell a few dozen sound chestnuts; scald them in order to remove the inner skin, then cook them very slowly in milk containing a piece of vanilla bean. When done all the liquid ought to be evaporated. Rub them through a sieve to make a puree.

Put this puree into a saucepan with half its weight of sugar; work the paste on a slow fire until it becomes consistent and detaches from the saucepan;

leave it till partly cold, then run a little of it at a time through a coarse sieve, pressing it down with a large spoon so that it falls like vermicelli; lift it up with a palette, dress it in a circle on the bottom of a dish and in the center build a pyramid of whipped cream, sweetened and flavored with vanilla.’ (The Epicurean, 1893)

‘Shell the chestnuts, remove the brown skin underneath, throw them in a kettle of boiling salted water and boil rapidly for twenty minutes, until perfectly tender, but not water-soaked. Drain […]

When done press them through a colander or an ordinary vegetable press; heap them in a serving dish, dust them with powdered sugar and garnish with whipped cream, or they may be served with plain cream.

An exceedingly nice dish in cases of anaemia, where easily digested fat forming foods are required.’ (Mrs. Rorer’s Diet For The Sick, 1914)

‘Roast fifty chestnuts, clear them from all skin, and rub them while hot through a coarse wire sieve on to a dish.

Boil twelve ounces of sugar to the ball degree, add the pulp of the chestnuts, work altogether in the sugar boiler with a wooden spoon on the fire,  […] let it be strongly flavoured with vanilla sugar,

and, while hot and just off the fire, rub it through a coarse wire sieve into the compotier in a raised pyramidal form; set it in the screen to be dried crisp, and with a teaspoon place small round heaps of whipped cream round the base.’ (The Royal English And Foreign Confectioner, 1862, p. 59) 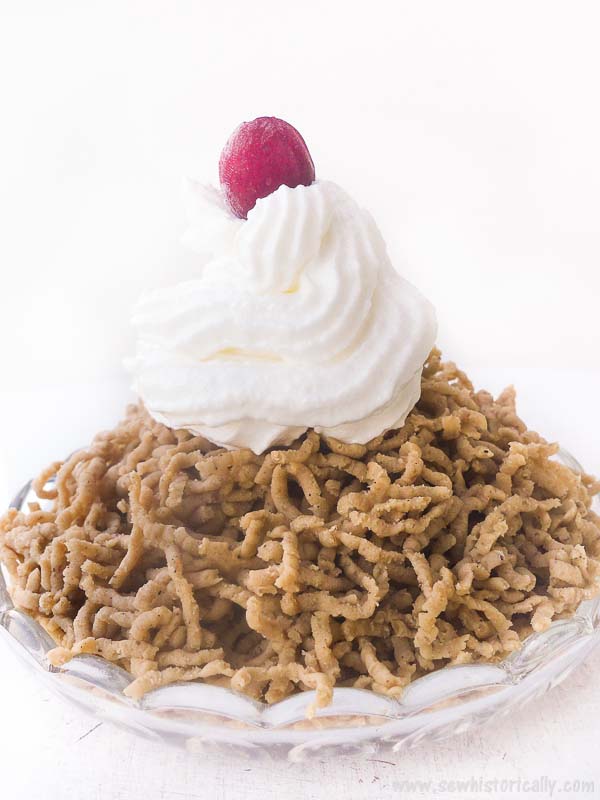 For Victorian chestnut vermicelli, you can use fresh chestnuts, or use store-bought canned or vacuum-packed whole cooked and peeled chestnuts or chestnut puree instead.

Some people like to add brandy, rum or cherry brandy but it isn’t really necessary. Victorian chestnut vermicelli is delicious when flavored with just vanilla!

Chestnut vermicelli is an allergy-friendly dessert because chestnuts are naturally gluten-free! If you omit whipped cream, the dessert is gluten-free, grain-free, dairy-free, egg-free and vegan!

You can even veganize the dessert by using sweetened, whipped aquafaba instead of whipped cream! 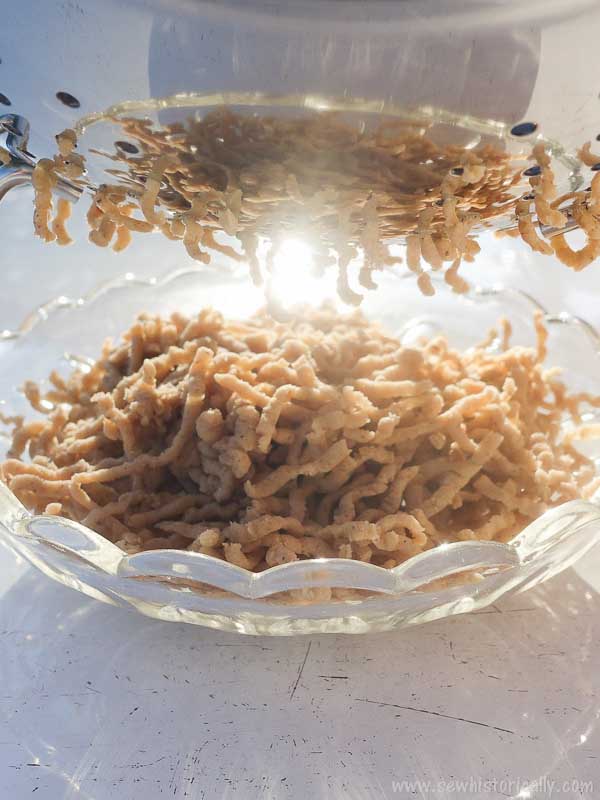 Put the peeled chestnuts into a saucepan, cover with milk (or water) and bring to a boil. Cook until the chestnuts are tender and the milk is evaporated.

Puree the boiled chestnuts in a food processor or blender until smooth. Add the vanilla sugar and stir until well combined.

Using the back of a spoon, press the chestnut puree through a colander. Garnish the Victorian chestnut vermicelli with whipped cream and cherries. 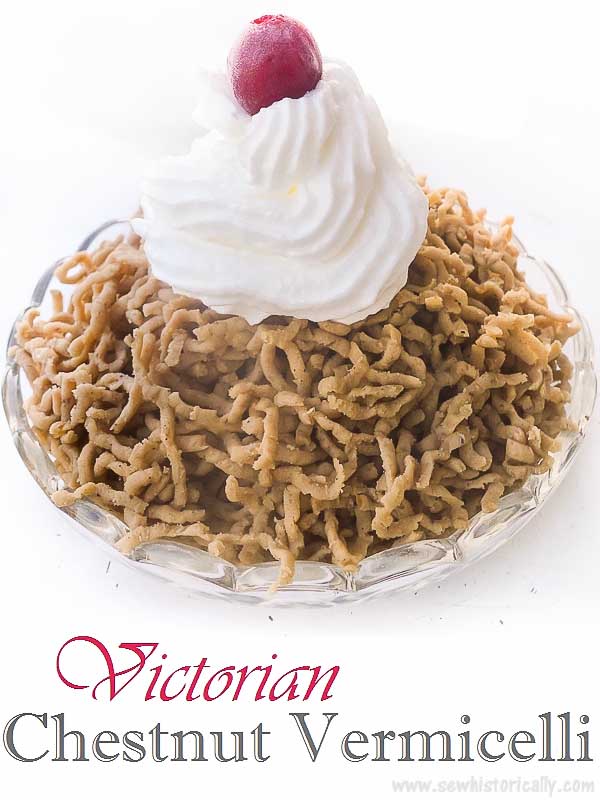