In the Victorian and Edwardian era, hair was sometimes singed instead of cut to trim split ends. A lighted taper (candle) was used to burn off split ends.

While Victorian women grew their hair as long as possible, even if the hair was thin, Edwardian women favored short and thick hair which was easier to put up into a pompadour hairstyle. To keep the hair healthy and beautiful, it was necessary to trim split ends from time to time. But should the hair be cut or singed to trim split ends?

Cutting Vs. Singeing The Hair – Victorian And Edwardian Hair Care

‘The hair will often show an unhealthy growth. The hairs become split at the ends and are split and torn in the length of the hair as well.

It is easy to find out about the appearance of the ends of the hair. Take a look and twist it somewhat tightly, and the unequal ends will rough up and show along the strand. They may be roughed up and made to stand out an inch or more from the twist, and then be easily clipped, but this should be carefully done, none but the hairs intended being cut, or the process will only make the hair more unequal in length.

The ends should also be trimmed. If this is done too squarely, it makes it difficult to dress the hair without having an obstinate end at the finish of the coil or braid to deal with. […]

The points of the whole matter is simply to clip or singe the ends of the unhealthy and split hairs, just as one would cut or prune an unhealthy plant, and it will, in the same way, promote the growth.’ (The Fountain Of Youth, 1905)

The Pros And Cons Of Singeing The Hair

‘Singeing is undoubtedly one of the best ways of treating hair that is impoverished or not in normal condition. Even the healthiest tresses sometimes require the ends treated in this manner, as it gives a new impetus to growth without running danger of “bleeding,” as it may from clipping. […] It should not be done oftener than once in three month, and sometimes at longer intervals.’ (Health And Beauty Hints, 1910).

‘This process of burning the ends of the hair is for the purpose of keeping it from splitting at the ends and is recommended for falling hair. When it becomes dead or dry, it splits and spoils the growth. By burning the ends, it closes the pores and keeps the fluid in the hair and gives it a livelier and healthier appearance. It often stops hair from falling out and is one of the best means to invigorate dull or dead hair.’ (The Manual On Barbering, Hairdressing, Manicuring, Facial Massage, Electrolysis And Chiropody, 1906)

Related: How To Make The Hair Grow – Victorian And Edwardian Hair Care

‘The practice of singeing the hair […] is employed in most cases on persons whose hair is of fine texture, inclined to brittleness and of sparing growth and density. By singeing, the ends of the hair are supposed to become hermetically sealed, and to retain all the natural oil that would, to some degree, otherwise bleed or leak out of the hair, and thereby rob the sebaceous glands and hair follicles of the nutriment requisite to its growth and development. It also prevents the hair from splitting at the ends and breaking off. Singeing should be done immediately after the hair is cut’ (Illustrated Book Of Instruction, The Robinson System Of Barber, 1906)

‘There is an old superstition that it is not an advantage to the hair to cut it, that “it makes it bleed.” This is absurd. Those who hold such ideas recommend singeing the hair. […] It requires some one very skillful to do this without burning off the long hairs as well as the short ones. The ends of the hair are easily singed without any danger of doing harm.’ (The Fountain Of Youth, 1905) ‘Singeing the hair is useless’ (A Girl’s Problems In Home Economics, 1926). 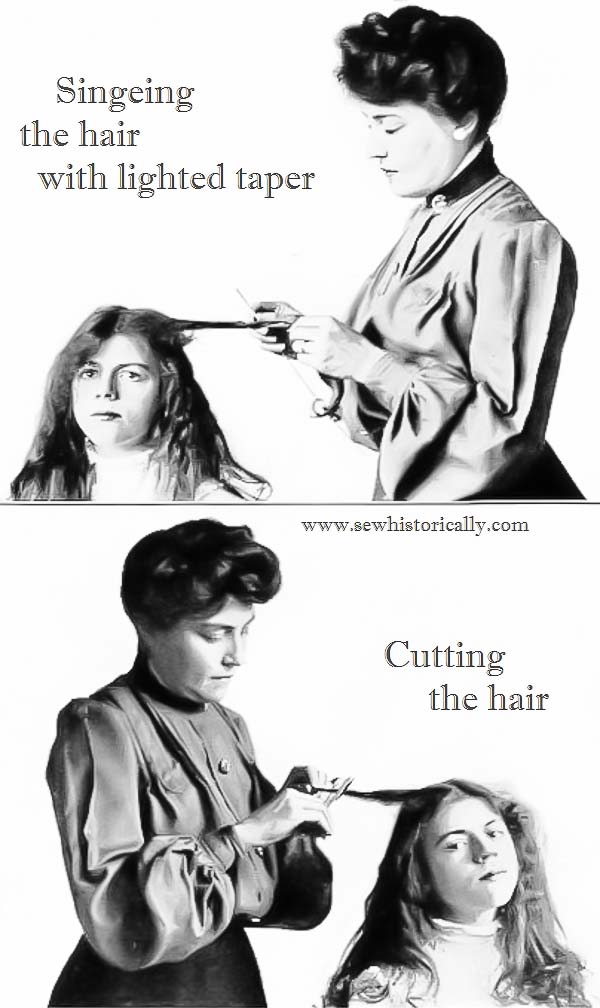 The Pros And Cons Of Cutting The Hair

It’s no longer fashionable, as in Victorian times, to have hair ‘to sit on’. Hair should be cut as ‘short, thick hair “does up” so much more successfully than long and thin, or even long and thick. As a rule, the hair should be cropped midway between the shoulders and the waist; if very luxuriant it may be allowed to grow to the waist, but as a rule not longer.’ (Every Woman’s Encyclopaedia, 1910-2)

‘One mistake that many women make is in letting the ends of the hair become uneven. The coiffure is much easier to arrange if the ends dwindle down to a few hairs instead of being clipped off straight across, but so long as they are allowed to stay in that condition just that long will the hair look dull and lifeless. Keep the ends of the hair cut off straight and even and cut them, if possible, in the full of the moon. It is said that the hair will stop falling out if it is cut then.’ (San Francisco Call, 1907)

After washing, drying and combing the hair, ‘clip all split ends. Clipping is more beneficial than singeing, and is less dangerous when a woman takes care of her own hair.’ (The Delineator, 1894)

Cutting the hair leads to coarse, less glossy, and paler hair, as well as shortens ‘its term of life’. Better than cutting, is plucking out the ‘ragged, withered, and grey hairs.’ (Scientific American Supplement Volumes, 1883) Especially children’s hair should never be cut: ‘the hair of women who possess luxuriant locks from the time of girlhood never again attains its original length after having once been cut.’ Some specialists regard it as important ‘that a child’s hair should never be allowed to grow more than six inches’ (Health And Beauty Hints, 1910).

How To Singe The Hair

‘Singeing is done with a wax taper made especially for the purpose of by an alcohol burner that allows a small flame to peep through a perforated surface. Wax tapers are usually recommended and can be obtained at any wholesale house or you may use the ordinary gas lighting taper.

The hair is taken down and combed out, the same as preparing it for a shampoo. Take a small strand separately and twist it firmly in order to compel the short ends of the hair to spring out from the coil also to prevent from catching fire as the singer is passed over the hair to catch the protruding ends.

Hair is often trimmed in this way, but in trimming it does not prevent the hair from re-splitting as in singeing. Continue clear around the head until all the ends have been touched. When hair is uneven at the ends, it can be trimmed with the shears or singed evenly by combing the hair straight down the back and touching the long ends with the singer or shears.

After singeing hair should be well brushed in order to brush the burnt ends off and avoid the appearance of singed hair. Where a head is to be singed and shampooed both, always shampoo first as it removes the oil from the hair, makes it lighter and easier to get at with the singer.’ (The Manual On Barbering, Hairdressing, Manicuring, Facial Massage, Electrolysis And Chiropody, 1906)

Related: About Brushing The Hair – Victorian And Edwardian Hair Care

‘To singe the hair take a little strand of the hair and roll it. Then run up and down the strand with the finger tips to loosen the ends. Now take a lighted taper and go up and down the strand until there is not a loose end in sight, and all the split ends are burned off. It is quick work, and must be done by some one who understands it. You cannot singe your hair yourself.’ (Chicago Tribune, 1903)

Singeing ‘is a simple thing to do. If the hair is short it can be done by holding the ends of the hair in the fine teeth of the comb which has been combed through it until just enough to be caught in the comb remains. Across these ends the lighted taper is swept. If the hair is long, the lock is twisted as if for clipping, and the taper is run quickly over the ends.’ (The Fountain Of Youth, 1905)

A ‘celluloid comb should never be used in singeing the hair, as it is inflammable and dangerous.’ (The Manual On Barbering, Hairdressing, Manicuring, Facial Massage, Electrolysis And Chiropody, 1906)

8 thoughts on “Cutting Vs. Singeing The Hair – Victorian And Edwardian Hair Care”