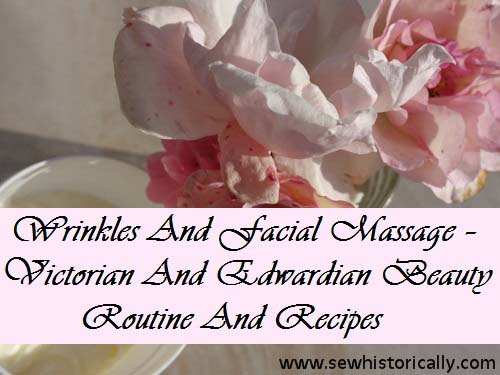 ‘It has been said by a famous French beauty doctor […] that paralysis is a woman’s best friend. The sensitive face, showing all the feelings which a sensitive person endures for good or evil, very quickly wrinkles, and the nervous temperament, making big demands upon the vitality of the system, shows age long before the phlegmatic temperament, which floats on the waters of life serenely, blow the winds ever so fiercely.’

To prevent wrinkles, avoid extremes of weather, be temperate to store your energy, don’t frown in temper or thought, use less water for washing the face, use plenty of grease on the face, live simple, don’t go on a diet: ‘adipose tissue […] [is] the real kind of wrinkle banishers’. (Every Woman’s Encyclopaedia, 1910-2a) ‘Ill-health, wrong diet, sleeplessness, habit, undue worry, grimaces and poor sight are all causes of premature wrinkles.’

‘No face ought to show a wrinkle under forty years of age, at least, and there is no need for a skin to lose its freshness before fifty.’ The complexion at forty may not have the tint of youth; but maybe is clearer and brighter than twenty years ago. ‘Pain, fatigue, and worry are the real age-bringers. Without these a woman always looks her best, and can look young and pretty almost as long as she wills to do so.’  (Every Woman’s Encyclopaedia, 1910-2b)

Facial Massage (Every Woman’s Encyclopaedia, 1910-2a)

‘For frowns, use a strong, firm pressure of the first two fingers of both hands, and a movement across the wrinkles and towards the temples. For the wrinkles across the forehead, move the fingers always in one direction, and up towards the roots of the hair. For the mouth wrinkles, use more of the fingers than the tips. Begin at the chin, and smooth in a semi-circular movement towards the ears, past the corners of the nose.’ For crows’-feet: ‘firm, circular movements’. For bagginess under the eyes: ‘movements from the inner to the outer corner of the eye’.

To prevent wrinkles round the eyes, place the light so that the object is easily seen without twisting the facial muscles. ‘Another injurious act is to face the light so it strikes directly upon the eyes, while the object looked at is in the shadow’, such as reading on the train (Health And Beauty Hints, 1910). Also wear glasses if they’re necessary. They may be not becoming, but wrinkles from facial contortion will be even more unsightly. Close the eyes and relax the muscles round the eyes for some minutes whenever it’s possible, such as in the train, during the lunch break, or at home. To prevent the wrinkles between the eyes, mix starch and water, and apply it to the forehead when you’re alone. When this dries into a cake, it ‘acts as a gentle reminder to the muscles of the face “not to do it.”‘ (Every Woman’s Encyclopaedia, 1910-2a)

‘A bright and studious young woman, still in her early twenties, found herself the victim of this scowl, which had already made two fine hairlines in her brow. She […] placed a white ribbon band tightly across her brow, tying it in a knot at the back of her head. At night she slept with the band. After several months the lines disappeared, and she is quite cured of the disfiguring habit.’ (Los Angeles Herald, 1903)

‘The forehead of a woman of middle life will reveal plainly the disposition of the person. If she is crabbed, her forehead will have a little bunch of up and down lines right in the middle. If she has been quick tempered and hasty to her remarks her forehead will nave two or three lines drawn up and down right between the eyes. The woman who has fretted and fretted and worried and worried will have lines running across her forehead almost from temple to temple and the more she has worried the deeper these will be. […]

A woman going to a face culturist asked that her forehead be made smooth. I would look twenty years younger said she if the lines could be taken out. The face culturist wet her finger tips in hot water, and passed them over the lines. It can be done said she, but it will take a month. And it did take a month, but at the end of that time – the lines were gone and the skin was as smooth as velvet. She steamed the forehead until the skin was relaxed, and while it was in this relaxed condition she massaged it with a skin food until the lines were nearly gone. They can be completely ribbed away in this manner. To be sure they will come again, but they can be driven away again.’ (Chicago Tribune, 1903)

‘A woman who suffers from headaches‘, should apply cold cream to the ‘complexion at the first indication of a pain in the head. The application is not to relieve the pain’, but to prevent wrinkles which the facial contortion of the migraine attack will bring. (Health And Beauty Hints, 1910)

Wash the face with hot water. With face cream and a ‘rotary motion, always with the upward part of the stroke harder than the downward’, begin the facial massage at the forehead. Then massage the cheeks, temples, and chin. Massage the corner of the eyes only with a fingertip. For the throat use a firm stroke towards the ears. Massage the face for at least 15 minutes. After the facial massage, splash cold water on the face.

‘High collars are almost sure to ruin even pretty necks by making yellow lines and fine wrinkles in the skin. […] collars should not be be worn so tight that the neck cannot be moved freely […] her collar may be as high as she likes, but with breathing space’. (Health And Beauty Hints, 1910) To keep the throat firm and prevent discolorations, massage it every night with cream.

For beautiful arms, wrap them at night with linen bandages soaked in almond or olive oil. Wrap oiled silk over the linen bandages ‘to prevent grease from rubbing off’. An alternative is to just rub the arms with oil. ‘Beginning at the wrist, the arm is clasped by the other hand […] rubbed slowly round and round all the time’. After 5 minutes, rub off excess oil, and pat the skin with cold water. Exercises with Indian clubs, dumbbells, or the ‘old-fashioned expander’ are equally important for beautiful arms. Beware of net sleeves as they coarsen the skin on the elbows. To cure it, scrub your arms every night with castille soap water and a flesh brush. Afterwards, rub in almond or some other oil. (Health And Beauty Hints, 1910)

‘If heels are blistered from slipping up and down in low shoes, paste four small half circles of velveteen smoothly to the side of the heel and the nap of the velveteen will prevent the foot slipping.’ (The Progress Meatless Cook Book, 1911)