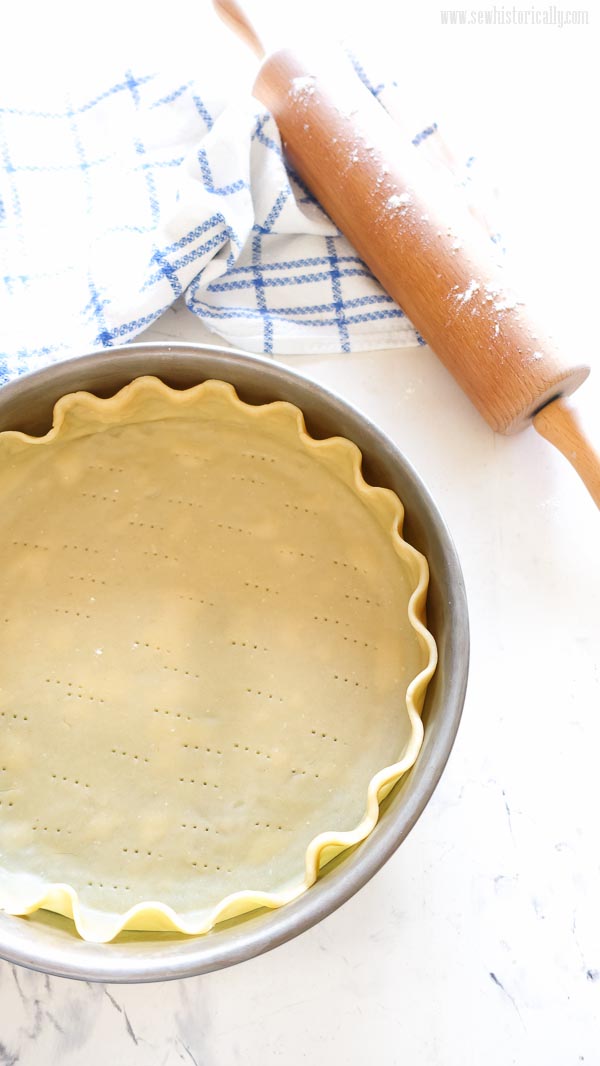 I love the vegan aquafaba pie crust and the flaky 4-ingredient pie crust, this Edwardian pie crust, however, is my all-time favorite: It’s buttery and flaky, and so easy to make! While it tastes almost like homemade puff pastry pie crust, it’s way easier to make!

‘Use the very best materials in making pastry.

‘Have the […] butter cold as possible.’ (Three Meals A Day, 1902) The ‘butter should be good and clean and if the butter is very salty it should be washed a little in cold water.’ (Best Recipes For Baking. A Book For The Home, 1907)

‘Ice-water, or the very coldest obtainable, should be used in mixing pastry. […] Good pastry may be made by using as little water as possible to get the dough in shape. Let the water be very cold; knead the crust slightly.’ (Three Meals A Day, 1902) 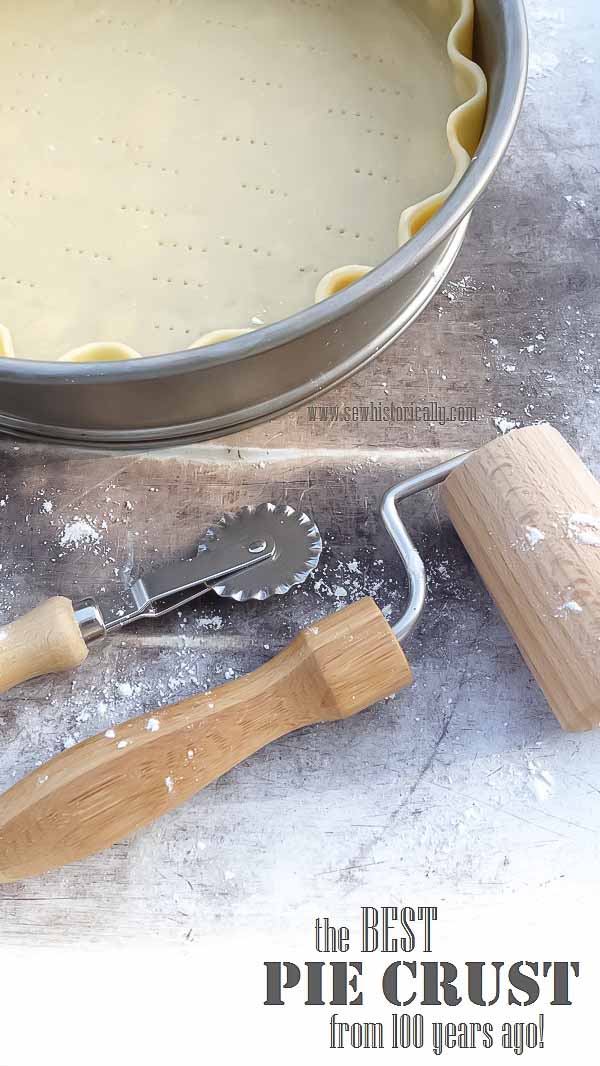 ‘When the crust is made it makes it much more flaky […] if covered with a cloth and set in a cool place for half hour or hour, in summer it should be placed in the ice box.’ (Best Recipes For Baking. A Book For The Home, 1907) ‘Do not touch the paste with the hands until ready to roll out.’ (Three Meals A Day, 1902)

‘Butter pie-tins well’ (Three Meals A Day, 1902). ‘Pie tins should be greased with good butter or lard before being used. It adds very much to the bottom crust if tin is dusted with cracker meal, always after dusting turn tin over and knock out the loose meal.’ (Best Recipes For Baking. A Book For The Home, 1907)

How To Roll Out A Pie Crust

‘A marble slab is much nicer for rolling out pastry than an ordinary bread-board, as it keeps the dough cool and firm. Dough for pie-crust should always be rolled one way, from you. Turn the crust each time, and roll in the same direction until it is the required shape.’ (Three Meals A Day, 1902)

Or: Lay the pie dough ‘on well dusted board, dust the dough on top just a little, take rolling pin and rub a little flour on it, make two rolls side ways, then dust the dough again if sticky, then proceed by rolling to and from you, roll until the crust is the thinness desired, about one-eighth inch is about right. Rolling out the crust this way you do not have to turn it over and over, which ruins crust to a certain extent, when not turned it makes it flaky and crisp.’ (Best Recipes For Baking. A Book For The Home, 1907).

‘In making liquid pies such as pumpkin, custard, etc., or hot fruit pies, it is much better to bake the bottom crust a little before putting in the filling. Always stick the crust in a few places with a fork before putting it in the oven, this keeps the steam from forming under it and raising it up […] always let the filling cool before putting it in.’ (Best Recipes For Baking. A Book For The Home, 1907)

Or: ‘Put the usual quantity of sugar for the pie in a bowl. Add enough cold water to form a kind of dough; stir in a heaping tablespoonful of flour, or a level teaspoonful of corn starch and mix thoroughly. Pour this over the pie-plant or other fruit. Add the top crust and bake in a hot oven.’ (Three Meals A Day, 1902)

How Long To Bake The Pie?

Place the pie ‘in a well-heated oven as soon as the pie is ready. […] An apple-pie may require forty minutes, while a rich lemon-pie will cook in twenty.’ (Three Meals A Day, 1902) ‘You can try your oven and see how hot it is by sprinkling a little flour in it, if the flour stays white quite awhile your oven is too cold, if the flour browns in a little while it is right, and if it browns quick and then burns it is too hot.’ (Best Recipes For Baking. A Book For The Home, 1907)

‘Pie crust can be kept a week or more and the last will be just as good as the first, if put in a tightly covered dish, and set in a cool place in cold weather and put in the ice box in warm weather, you can then make fresh pie every day with little trouble.’ (Best Recipes For Baking. A Book For The Home, 1907)

The BEST Pie Crust Recipe – From 100 Years Ago!

Hint: Double the ingredients if you want to make a double pie crust.

‘Chop shortening and flour together with a knife. […] When well cut together add water gradually, still cutting, until the whole is in form. Be careful, in adding the water, not to allow the dough to become wet in spots.’ (Three Meals A Day, 1902)

Chill the dough for at least 30 minutes. Then roll out the dough on a floured surface and line a buttered pie pan with the dough. 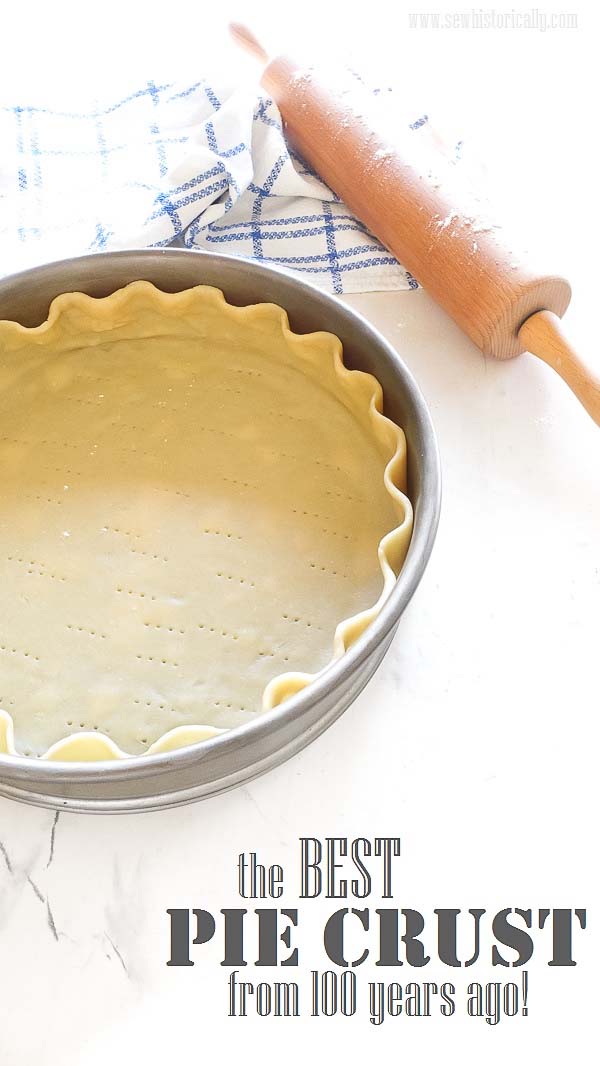