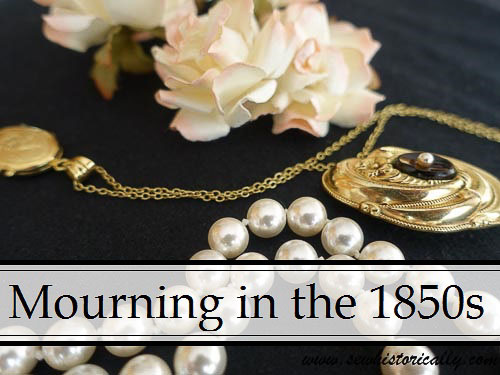 In the 1850s, three stages of mourning were worn: Deep mourning, second mourning and half mourning – each stage had its own requirements. Women had to dress accordingly in order not to become a social outcast. Mourning was less strict for working men, whereas young men usually wore mourning as long as women.

Close or deep mourning was worn for the nearest relations: husband, parents, child and siblings. Usually, a lusterless black dress with long black crape veil over the face and reaching the skirt hem at the back. Second mourning was worn for distant relatives or by those who have previously worn deep mourning. The usual dress was made of black silk, worn with a black demi-veil or without a veil. In half mourning, colors may be worn: such as lavender, grey and purple.

The mourning etiquette in England was very strict, while in the US it was less rigid, sometimes mourning wear was even ‘dressy’ or ‘showy’. So keep in mind that some of the dresses described in Godey’s Lady’s Book might be too dressy for mourning wear in England or other countries.

A widow always wears deep mourning, and some wear it for the loss of a parent, sibling or child. The signs of deepest mourning are a black lusterless dress, a black bonnet trimmed with black crape and a black crape veil worn over the face. Deep hems on veils and coats are also characteristic for deep mourning. Because there can’t be much variety in deep mourning dresses, ‘neatness is considered its principal elegance’. (Godey’s Lady’s Book, 1854, p. 190)

In the first six month, some mourners don’t wear anything white: collar, cuffs, undersleeves, sometimes even underwear (underwear was usually white in the mid-Victorian era). All mourners ‘in first mourning [except the widow, see below] are indeed in deep black’.

In Philadelphia, deep mourning is plain and veils are worn for a longer time, while mourning in New York is rather ‘showy’, so that even deep mourning dresses are trimmed with jet, beads, crape flowers and feathers. (Godey’s Lady’s Book, 1857, p. 192)

Some US mothers who mourn for their lost child choose to wear ‘white or soft neutral tints’ instead of black (Godey’s Lady’s Book, 1857, p. 286). 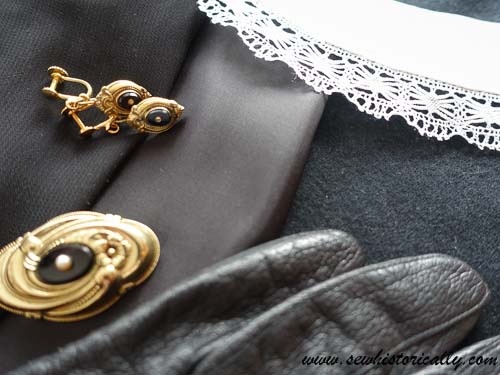 Deep Mourning of a Widow

‘A widow’s mourning, though, strange to say, is the only close black relieved by any white for the past year or two. Fashion graciously permits her a close white cap about the face, “a widow’s cap” as it is called, of plain lawn or muslin as a double border, formed by two extremely narrow puffs of the same, slightly rounded by passing a rod through when newly made or “done up”. This is not generally adopted, as yet, in our own country [USA], though many wear them; but bonnet caps in the same style are as universal for widows as a double crape veil.’ (Godey’s Lady’s Book, 1857, p. 192)

A widow’s double crape veil is worn for twelve month over the face. After a year, she may wear a demi-veil (shorter at the back and no longer over the face) or choose to ‘go on blinding and stifling herself’ and wear the long veil over her face for further three to five years.

‘Others in deep mourning wear a single thickness and width, about a yard, ordinarily, and two yards long.’

A mourning veil is secured by two black veil pins on each side of the bonnet, or it is tied with attached strings. (Godey’s Lady’s Book, 1857, p. 192) 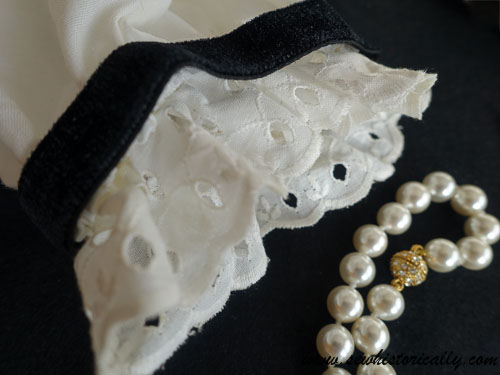 ‘The principle dress fabrics are bombazine, Tamese cloth, alpacca with bombazine finish, Canton cloth […] plain merino, cashmere, and mouselline are also used for the house or street.’ In summer, lighter dress fabrics are chosen, such as barège (a cross-barred fabric) and grenadine. Morning dresses (which are worn at home, for housework etc.) are made of plaids, printed mousselines, chintzes and ginghams.

Travelling dresses are made of serges, mohair, etc. ‘For morning or travelling dresses, where crape would soon spot or rust, plain Mantua ribbon, of one broad or several narrow width, is much used; also a variety of galloons and braids manufactured expressly for this department.’ (Godey’s Lady’s Book, 1857, p. 192)

A close black tarlatan or muslin cap with crimped border is worn for at least a year. In 1858: ‘Plain white lace quillings are admitted as bonnet caps in the deepest black’ instead of the ‘quilled crape of the past three years’. (Godey’s Lady’s Book, 1858, p. 572)

‘Black crape collars are worn by all, lightened with thulle insertions and frills, if the taste inclines to display, rather than simple severity.’ (Godey’s Lady’s Book, 1857, p. 192)

‘Undersleeves are of crape, tissue, or grenadine.’

Cambric handkerchief are either with a plain broad hem or a printed black border. ‘An embroidered pocket handkerchief would be as much out of taste as a Valenciennes collar.’ 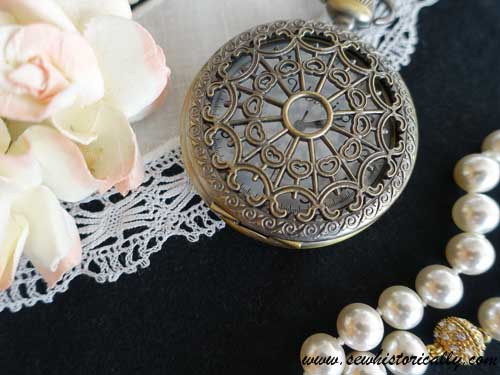 Bonnets are of crape, or bombazine with or without crape trimming. For summer wear, crape-covered black straw bonnets or double crape bonnets ‘over a light wire foundation covered by silk. (Godey’s Lady’s Book, 1858, p. 572) Bonnet strings are made with black ribbon or double crape. A ruched black tulle cap is worn under the bonnet.

Black cloth cloaks with a double row or stitching, crape-trimmed bombazine mantles and Thibet cloth shawls with ribbon binding or fringe. In February and March, a sack or knitted worsted Sontag may be worn underneath for additional warmth. In 1858, unlined crape-trimmed bombazine summer mantles, or lusterless silk mantles with net yoke and flounce (Godey’s Lady’s Book, 1858, p. 572).

‘As a principle of taste, ornaments used in mourning should be few and plain’: such as a jet or jet imitation brooch or bracelet, or a plain gold brooch with black enamel. ‘The oval brooch for hair is frequently the only ornament worn. This is usually surrounded by a rim of small jet, and many have an outer rim of pearls.’ (Godey’s Lady’s Book, 1857, p. 192) 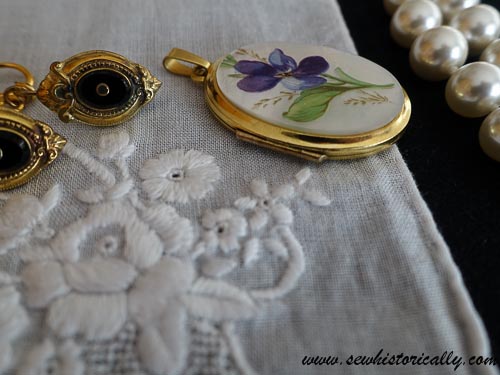 Photograph of woman in dull black dress with black collar, white cap, and with brooch.

Demi-veils of Brussels net with round corners and ‘with a ruche of black crape, lightened by another of black illusion, being placed underneath’. (Godey’s Lady’s Book, 1858, p. 192) 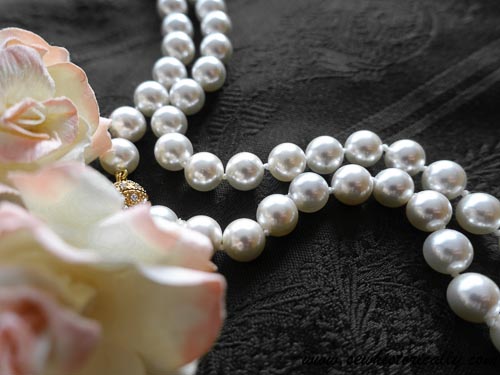 ‘Mixed straws, gray chips, white chips, trimmed with black and white ribbons, Neapolitans, and crapes are among the favorite bonnets. Ruches of ribbon or crape’ are used as trimmings (Godey’s Lady’s Book, 1858, p. 192).

Color is coming back at last! However, the change from black to color should be made gradually: First, the black dress and bonnet is trimmed with colored ribbons, later, colored dresses may be worn. Colors for half-mourning are: lavender, purple, grey, black and white, and sometimes blood-red.

In the US, light mourning wear, especially black and white, is hardly distinguishable from other fashionable dresses. ‘Every shade of lavender is called into requisition in ribbons, silks, indeed all dress fabrics.’ Even lace mantles are worn in half mourning. (Godey’s Lady’s Book, 1857, p. 574) In 1858, rather black and white is worn, than violet or lavender and black. ‘In fact, purple and lavender, are not now considered mourning at all, and never have been really so, though admitted to general wear the past five years.’ (Godey’s Lady’s Book, 1858, p. 192)

A variety of material and colours may be worn: lead and stone colour, lavender and deep purple (Godey’s Lady’s Book, 1854, p. 190). ‘Gray cloths, whether Lavella, mousselines, Madonna, or silk tissues – and stripes, plaids, and figures of black on a white ground, or white on a black ground, are the most desirable.’ (Godey’s Lady’s Book, 1858, p. 192) Also silks, such as glacee, foulards and chinee; and grenadines and organdies in summer.

A black velvet mantle and close velvet bonnet (worn with a black silk dress) is one of the most truly elegant costumes’ (Godey’s Lady’s Book, 1853, p. 92).

How long should one mourn?

About Mourning Clothes in General

Mourning clothes can be bought in ‘mourning stores’ in all large towns and cities: Jackson’s in New York, Beeson and Son in Philadelphia. ‘Beside these and similar places, nearly all large dry-goods houses, such as Stewart’s, Arnold’s, Evan’s, Levy’s, Sharpless’, etc. etc., have a “mourning department,” where materials may be purchased.’

The first essential in buying mourning clothes is a ‘good shade of black, neither blue nor rusty; a dead, solid color is considered most desirable.’ Dress, mantle, and bonnet should be of the same fabric, either bombazine or silk. Cashemeres and mousselines wear better than bombazine. Don’t buy cheap black fabric. Black English chintz morning dresses ‘fade very little in washing’. Lead-coloured lining is used for thick materials, whereas black linen or black silk covered lining is used for thin materials. Black cambric lining and black lawn dresses will stain the skin. Mourning dresses should be trimmed very little, and rather with tucks than ruffles. For traveling, grey dresses are worn because of the dust (even in deep mourning). A grey silk and linen fabric trimmed with black braid is best for this purpose. (Godey’s Lady’s Book, 1854, p. 190) Crape trimming, in shell, diamond or honeycomb pattern, in different width can be bought at any trimmings store (Godey’s Lady’s Book, 1859, p. 287).