My modern Edwardian bra has a button closure, adjustable shoulder straps, elastic lacing at the back and is boned like a corset. 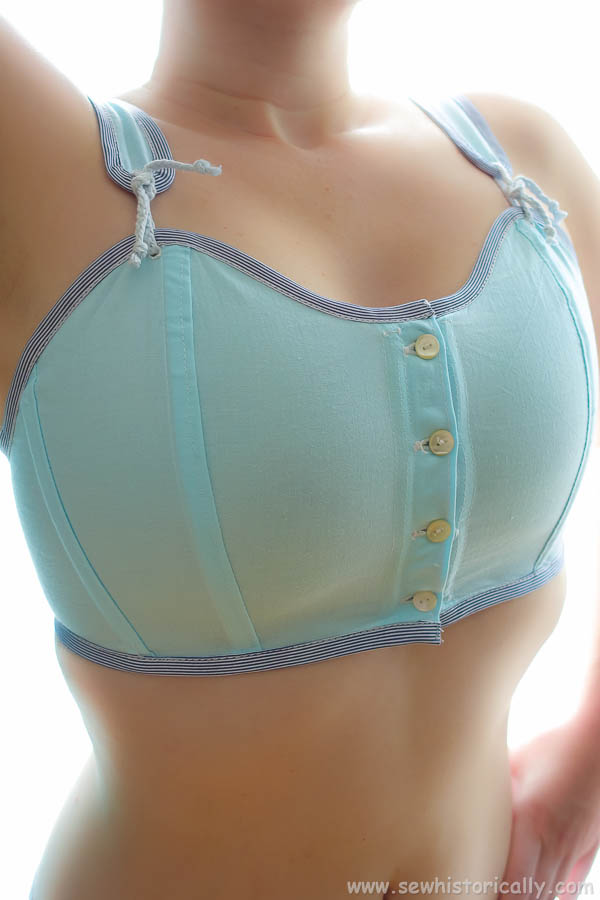 I made another historybounding garment! My modern Edwardian-style bra is inspired by antique Edwardian brassieres. But I’m wearing the bra as everyday bra because my DIY bra turned out so comfortable.

Related: How To Sew An Edwardian-Style Bra

Because most corsets in the Edwardian era were single-layer corsets, I also used only one layer of fabric for the Edwardian-style bra. I used pale blue cotton fabric that I dyed myself.

So, because it’s a single-layer bra, I couldn’t use the welt seam method. Instead I used flat felled seams which was one of the most popular seams for underwear in the Edwardian era. I also finished all raw edges either with cotton bias binding or cotton tape.

My Edwardian bra is boned at the front, side front and back. There are a total of 8 bones in the bra. I used synthetic whalebone because it’s the best substitute for real whalebone. The bra is boned like a corset with vertical boning and cotton tape boning channels.

The boning prevents wrinkles in the bra. And what I also like about the corset-style boning is that the vertical boning doesn’t dig into the body like the underwire of store-bought bras!

The bra is closed with buttons at the center front. A button closure was the typical closure of Edwardian bras. I used historically correct real mother of pearl buttons.

Edwardian bras often had lacing at the back. And after reading that some Edwardian corsets already had elastic lacing instead of ordinary lacing cords I decided to use elastic lacing for my bra too! Because elastic corset lacing is no longer produced, I used ordinary elastic band instead.

While most Edwardian bras had metal grommets for the lacing, I made hand-sewn eyelets. On instagram I shared a video of how I hand sew eyelets.

The adjustable shoulder straps of my DIY bra are inspired by 18th century stays. Edwardian bras usually had adjustable shoulder straps with buttons like my Edwardian health corset. But the buttons create an unsightly bulk if the bra is worn under modern clothes. So I used lacing cord instead. I used pale blue cotton yarn for the lacing cord which I braided into a four strand braid.