If you’re looking for an easy Edwardian hairstyle for short hair, you’ve come to the right place! Do you admire Edwardian Gibson girl hair but you have short hair: This is an easy tutorial to create authentic Gibson Girl hair with short hair. 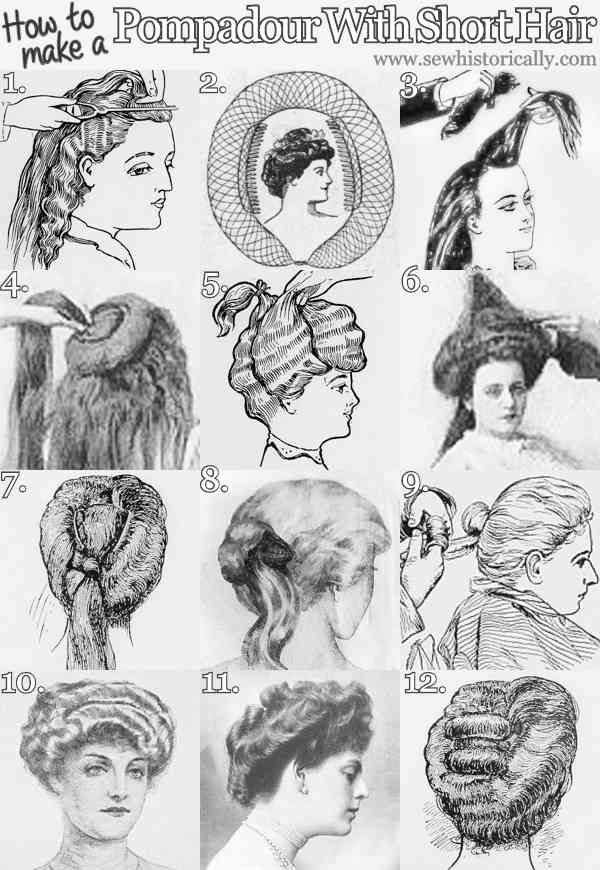 Gibson Girls were the it-girls of the late Victorian and Edwardian era. And their favorite hairstyle was the pompadour hairstyle. The Edwardian gibson girl hairstyle is a bouffant updo that softens the contours of the face. It’s a very feminine hairstyle with waves and curls.

Gibson Girls usually had long hair. But if you have short hair, don’t despair: Not all Edwardian women had long hair! Some women had to cut their hair due to an illness, while others burned their hair with curling irons.

‘I once knew a woman whose hair was only three inches long all over her head, owing to the fact that she had burnt it in curling it, and yet when it was properly arranged, it looked as if it might have belonged to one of the famous seven sisters.’ (Los Angeles Herald, 1906)

By the way, even if this easy Gibson Girl updo is for short hair, it also works perfectly for medium hair and even long hair.

Related: How To Make An Everyday Edwardian Pompadour Hairstyle

‘Short, thick hair “does up” so much more successfully than long and thin, or even long and thick.’ (Every Woman’s Encyclopaedia, 1910-2d)

‘This season’s styles […] can not be prettily arranged if the hair be very long. Short hair, not too thick, does up well. Thick hair if short can be managed, but the very long, very abundant crop of hair can not be done up prettily.’ (The Saint Paul Globe, 1899) A woman with short hair ‘will appear to have twice as much [hair], once it is “up,” as her sister with [long] hair’ (Every Woman’s Encyclopaedia, 1910-2d).

For the first pompadour updo you don’t even need a switch. But you need a hair rat. You can either buy a modern hair rat or make a historically correct DIY wire hair.

Related: How To Make An Edwardian DIY Wire Hair Rat 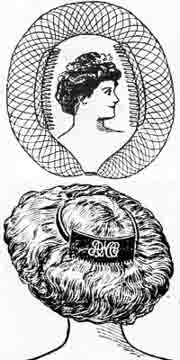 Make The Pompadour Over A Hair Rat

‘I once knew a woman whose hair was only three inches long all over her head […] and yet when it was properly arranged, it looked as if it might have belonged to one of the famous seven sisters. She waved it first. Then she pinned a long roll around her head and combed the three inches of hair up over it, fastening them in with combs.

Put The Hair Up Into Puffs

When that was done, she had a thin strand of hair left in the middle between the combs. This she divided into two parts, and rolled each part around a small “rat.” She fastened these with hair pins, so completing a most becoming and abundant-looking coiffure. Her hair was too short to use a switch with, so she used rolls instead.’ (Los Angeles Herald, 1906)

For this Gibson Girl updo you need a hair switch matching the color of your hair. By the way, the “transformation” mentioned in the text below is a pompadour wig – usually made of real hair – that was used under one’s own hair: You can use a hair rat instead.

Related: 2 Ways To Make An Edwardian Hairstyle With Thin Hair

‘If you are so unfortunate that your hair is short, use a switch in the following manner: Tuck the ends of your own hair over and under the transformation in the back, forming a nice round effect. Then bury the stem of your switch into this and fasten it securely with a hairpin. Make your Psyche with this just as if it were your own hair. This way is far better than pinning it on already made.’ (San Bernardino Sun, 1909)