‘Artificial light is probably as ancient as the human race or the use of fire; but the means employed to produce it among the savage tribes have scarcely advanced beyond burning branches of trees or splinters of wood.

Torches were probably an improvement upon these; and lamps, even of the simplest kind, display a great advance in refinement, requiring a combination of contrivances, such as the preparation of oil, a vessel to hold it, and a proper substance for the wick. […]

We read, however, of a species of candles sometimes used among the Romans, made of strings of papyrus, or rushes, dipped in pitch and surrounded with wax. Wax and tallow candles were, according to Pliny, likewise occasionally employed in religious offices. Torches and flambeaux were used at all times […]

In the twelfth century, candles of wax, and chandeliers, were generally seen in churches; and, as refinement increased, they came gradually into use among the nobility and wealthy all over Europe, as did those of tallow among the middle classes. […]

Related: How To Make Tallow Candles

The materials from which artificial light is procured are rived partly from the animal, partly from the vegetable, and some for the mineral kingdom. Animal fat or oleaginous substances, in our common temperature, are either solid, as wax and spermaceti, or always fluid, as fish oil. Of vegetable oleaginous substances, some are always solid in the usual temperature of Britain, as palm oil; others are always fluid, as olive and rape oils. The mineral substances are naphtha, petroleum, &c.’ (An Encyclopaedia of Domestic Economy, 1855)

‘In the middle ages, wax candles and torches were employed for religious and private purposes. […] rush-marc candles were made and used in 1775 in Hampshire, England […] pine splinters are at this time employed in the spinning-rooms of the Forest Noir.’ (The Art Of Manufacturing Soap And Candles, 1867)

Related: How To Make Rushlights

‘Large splinters of resinous wood are used in many countries, and have been used, no doubt, from the earliest periods, among the lower classes, instead of candles. This is frequently done in Ireland, where, in the bogs, large quantities of pine are found deeply buried, and which have lain there for many ages; when dug up, these are rended like laths, and dried, when they burn readily, giving a good deal of flame and light, and are used in their dwellings by multitudes of the peasantry, particularly in the province of Ulster.

Similar slips of resinous wood are used also in North America, and in the Highlands of Scotland.’ (An Encyclopaedia of Domestic Economy, 1844) ‘Candle-Fir. Fir that has been buried in a morass, moss-fallen fir, split and used instead of candles. […] The splits of it are used for light, by the name of candle-fir.’ (The Encyclopaedic Dictionary, 1882)

‘Torches […] are lights of an inferior kind. The ancient torch appears to have been formed of wooden slips, or straight branches bound together by rope, the inside being filled with flax, tow, or other fibres, impregnated with pitch, rosin, wax, oil, or other inflammable substances. Some modification of a construction of this kind is still used in different countries.’ (An Encyclopaedia of Domestic Economy, 1855)

Related: How To Make DIY Candle Wicks With Rushes – For Oil Lamps & Candles

‘A cheap form of […] wick is hemp saturated with pitch or tar, known as “torch hemp,” and in combination with ordinary [cotton] wicks […] produce […] wicks which give a very large flame.’ (Specifications Of Inventions, 1872) ‘The ancients used the stalks of many different plants for the wicks […] beating them out like hemp, and when dry dipping them in melted resin’ (Encyclopaedia Britannica, 1817). ‘The yellow resin, which is extracted from the pine, serves for candles, by melting it on a wick.’ (The Domestic World, 1889) Romans made candles with wicks ‘of strings of papyrus, or rushes, dipped in pitch’ (An Encyclopaedia of Domestic Economy, 1855). 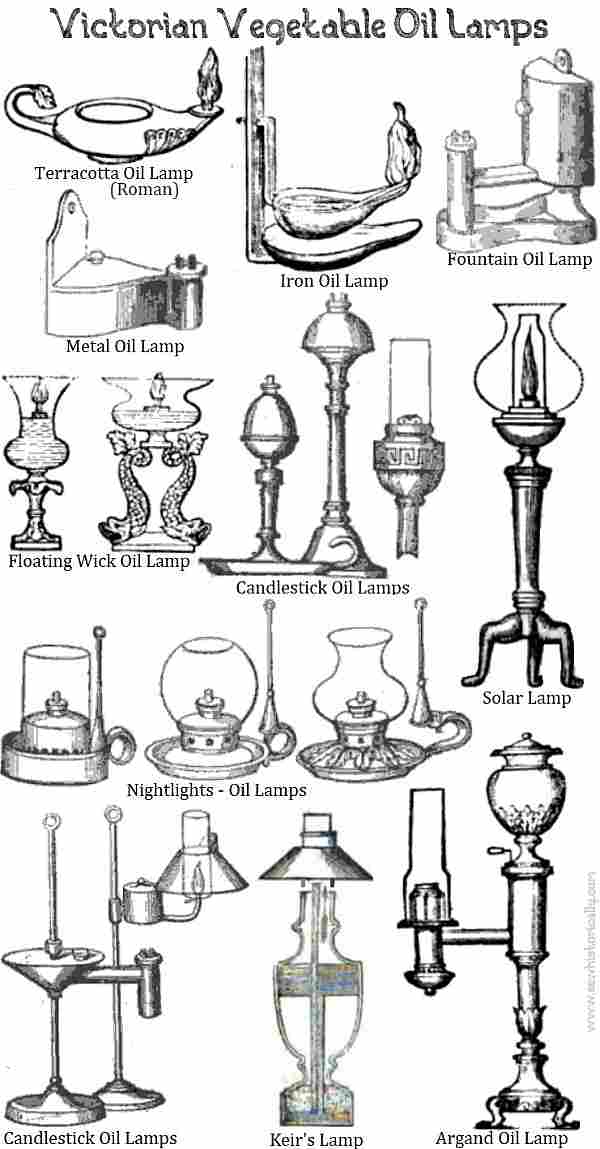 ‘The most simple lamp consists in a vessel of any shape, filled with oil, or other inflammable liquid, and having a short depression or spout on one side, on which lies a wick composed of any fibrous substance capable of imbing the oil by its capillary attraction. […] a lamp of the simplest kind made of hammered iron […] for burning fish oil […] The wick is of peeled rush. […] The Esquimaux make their lamps of a kind of pot stone […] Their wicks consist of moss laid in the oil. […]

Related: How To Make An Easy Oil Lamp

Victorian oil lamps were often made in the form of candlestick lamps. ‘These require the wicks to be very nicely trimmed […]

Float lights are short wicks fixed into some substance that floats on oil, as a round slice of cork, or a hollow flattened sphere of glass or tin. […] They are very useful for burning to give light all night, being safe; and, by making the wick small, they may be made to give as little light as is required. The best sperm oil should be used; and it is well to put a teaspoon-full of water into the bottom of the vessel before the oil is poured in, that, when the oil is burned out, the wick may be extinguished. An inch in depth of an ordinary tumbler will burn twenty-four hours.

Fountain lamps are those where the reservoir is above the level of the wicks […] With regard to the distance of the flame from the surface of the oil, if it be too near, too much oil will be raised, more than can be readily consumed; in consequence the light will be weak, and the flame will be in danger of being put out. If the distance be too great, the capillary attraction will not raise oil enough.’ (An Encyclopaedia of Domestic Economy, 1855).