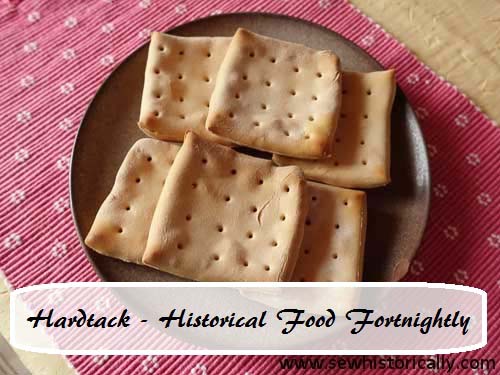 Hardtack will keep much longer than flour (in museums there’s still hardtack which is over hundred years old! 😮 )- so it’s my entry for the Historical Food Fortnightly challenge 12 (food preservation).

To eat hardtack, it must be soaked in water: either in hot water for some hours, or in cold water overnight. The hardtack will increase in size while soaking.

A recipe for hardtack from Mrs Beeton’s Household Management book (published in 1861):

are made of wheat-flour from which only the coarsest bran has been separated. The dough is made up as stiff as it can be worked’.

Knead together flour and some water. Gradually add more water if necessary till the dough has the consistency of firm play dough. Then roll it out till it’s 0.5″/ 1cm thick and cut it into 3″ x 3″/ 7cm x 7cm squares. Pierce 4 x 4 holes into each cracker (this will make it easier to break the hard thing later 😉 ). Preheat the oven to 375°F/ 190°C and bake the hardtack for about 30 minutes on each side.

I tried hardtack soaked in broth with 18th hard dumplings (video recipe). The hardtack tastes alright, but it’s not the best thing in the world. 😉

Our food was very similar on that day: 😉 My dog had soaked hardtack, cottage cheese and cucumber – she loves cucumber! 🙂 – and I had cucumber salad with soy yoghurt and chapati bread. My dog loved the variation to her usual food – she devoured the soaked hardtack greedily. 😀

Here I’ve written more about dog food and dog biscuit history from the Roman to the Edwardian times.