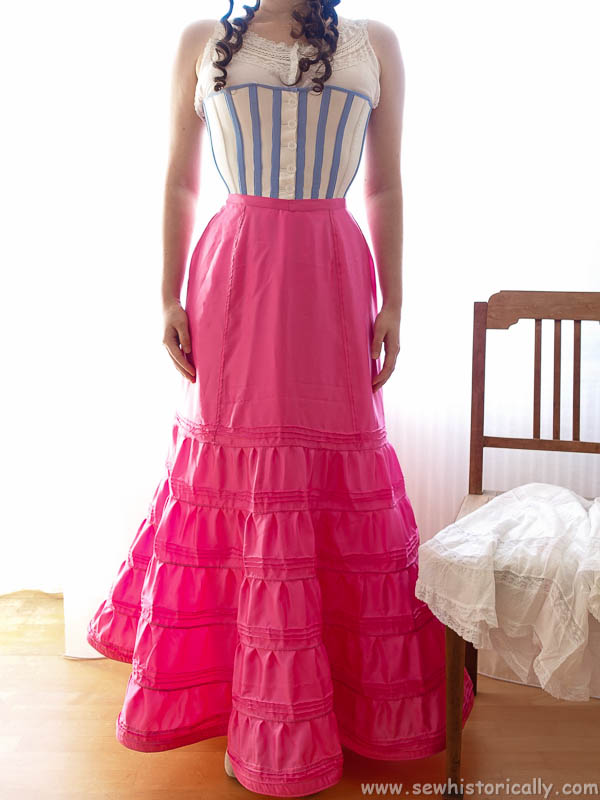 If you follow me on instagram, you know that I’m sewing an Edwardian shirtwaist costume at the moment. It consists of a refashioned men’s shirt-turned-Edwardian blouse, a black wool skirt, and a black leather belt and chatelaine bag. And because Edwardian wool skirts were usually worn over colored real or faux silk petticoats I made this pink faux silk petticoat for it.

‘All petticoats must be very full […] and they must be built to make the gowns stand out. […] in place of the crinoline […]They must be made out of good material – that is, out of silk which had some stiffening.’ (San Francisco Call, June 1904)

As is typical of early Edwardian skirts, it fits tight around the hips and is very wide at the hem with a tiered flounce below the knees. My petticoat measures over 5 meter at the hem! It has rows of pintucks and is stiffened at the hem to support the wide hem of the heavy wool skirt.

‘It is of real importance that the petticoats worn with these skirts should be perfectly cut and fitted, and when finished they should be one-half inch shorter than the skirt.’ (San Francisco Call, 1908)

Heatherbloom taffeta petticoats ‘are rich enough to accompany any gown for any occasion, yet so inexpensive that the average woman can afford one to match every garment.

Made with the same care as expensive silk petticoats, have the same delicate rustle and charming lustre, and wear three times as long.’ (Ready-Made Petticoats Of Heatherbloom, 1907) 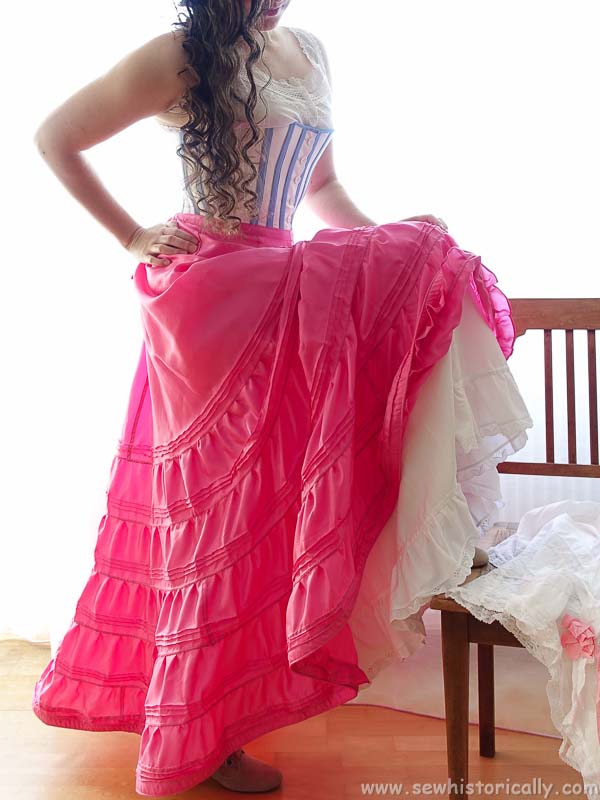 It’s crazy what an incredible amount of time and sewing thread goes into a simple Edwardian petticoat! Or at least into a petticoat that measures more than 5 meter around the hem, is tiered and has countless rows of pintucks. 20 hours and 10 spools of sewing threads later and the petticoat was finally – finally – finished! And while it’s usually the fabric (or lace trim) that’s the most expensive item of a historical sewing projects it was different here: I used quality cotton sewing thread and this actually did cost more than the historically accurate fabric! 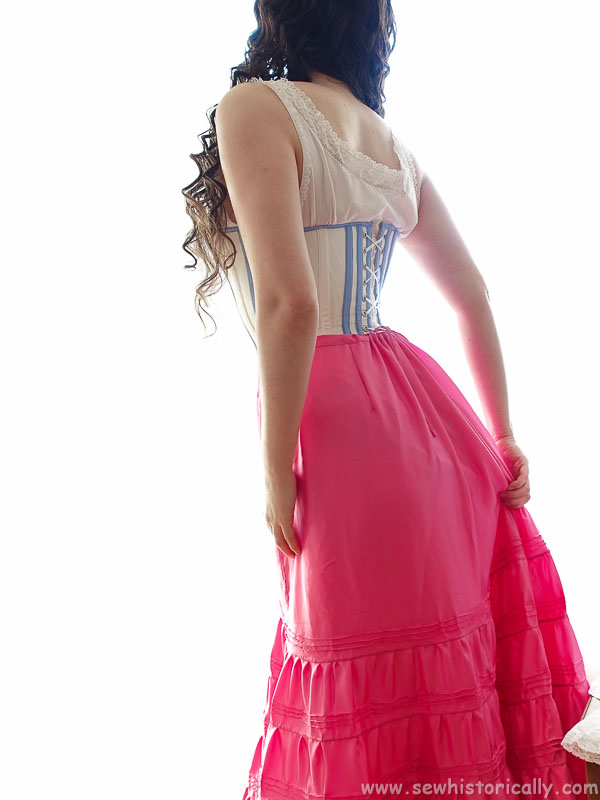 This petticoat style with fitted gores or darts at the hips and a wide tiered flounce below the knees was very popular in the Edwardian as many extant garments as well as ads show.

‘Correct shaping is quite as important a consideration in the making of petticoats as in dress skirts […]  darts over the hips afford smooth adjustment at the top.’ (Delineator, 1903) 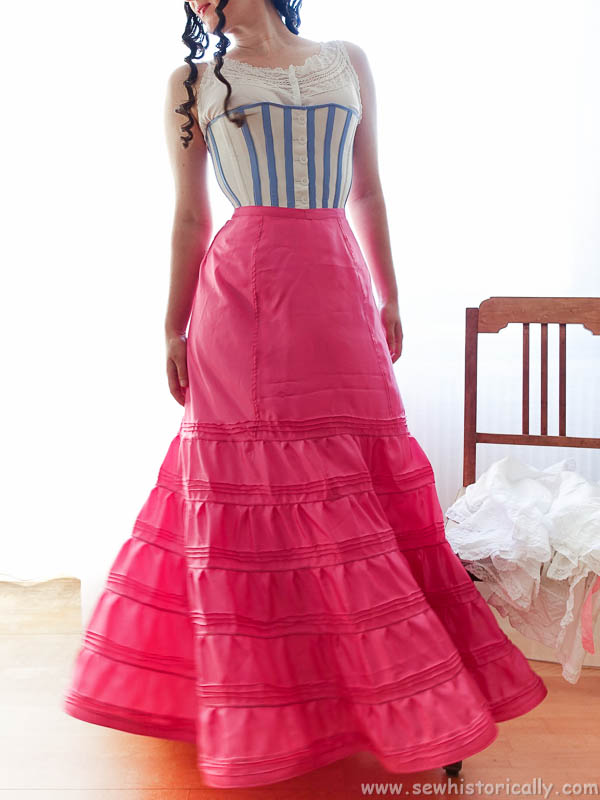 Taffeta petticoats make a rustling sound when you move and this was called “frou-frou” in the Edwardian era. Frou-frou also meant that the petticoat was heavily decorated and very wide around the foot. Rustling frou-frou petticoats were very popular in the early 1900s but came out of style by the end of the Edwardian era.

Petticoats ‘must be elaborately frilled to make a frou frou around the foot. […] the petticoats of to-day are full and are made as fluffy as possible.’ (San Francisco Call, June 1904)

‘Modish women are struggling with the problem of the new serpentine skirt, so clinging above the knees that there is absolutely no room for a petticoat beneath, and so flaring below that it requires a support. Parisian genius has evolved in answer to this demand the garter skirt of taffeta […] it consists of a gathered ruffle of taffeta with another ruffle sewed on the edge in order to produce still greater fullness.’ (San Jose Mercury News, 1901)

‘One very good flounce for silk petticoats, circular in effect, is made of bias strips of material cut three and one-half inches wide, joined, and one edge put through a ruffler, fulling it very slightly. […] Stitch strips together and close ends of flounce with a French seam. […] This gives considerable fullness at the foot, but gradually works down, which makes the petticoat comfortable for walking, but no bulk at the top of the flounce. Taffeta lends itself specially well to such treatment.’ (Clothing For Women: Selection, Design, Construction, 1916) 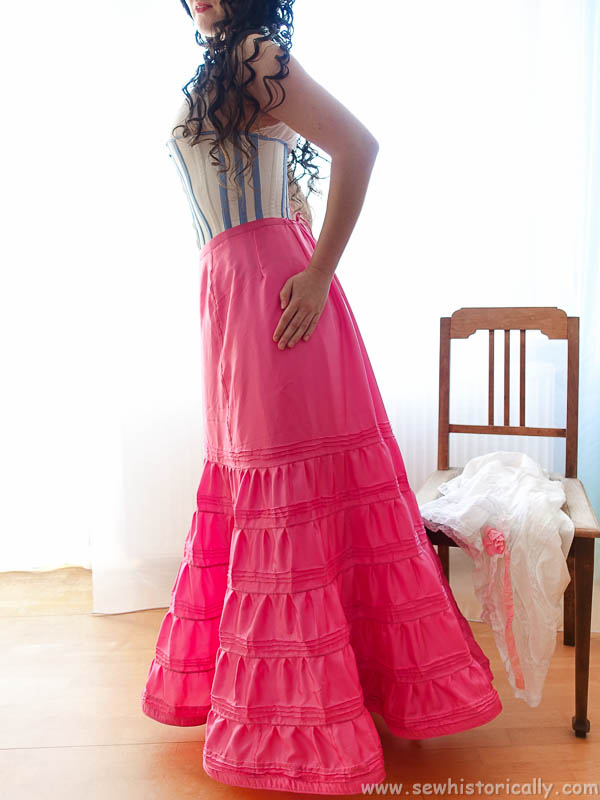 I used 3 meter of pink rayon taffeta for my Edwardian petticoat. Rayon taffeta is a natural and historically accurate fabric which is way cheaper than silk taffeta. This type of fabric was known as artificial silk, heatherbloom or nearsilk in the Edwardian era. Because silk fabrics were often not washable back then, artificial silk fabric was advertised as superior in the 1900s because it was washable.

‘Heatherbloom Taffeta is a wonderful fabric for use in place of silk, closely resembling the latter without possessing any of its disadvantages. An ideal material for petticoats. Women who formerly could afford only one or two perishable silk skirts may now rejoice in four or five dainty ones of Heatherbloom – lustrous enough to deceive the most careful observer, durable enough to outlast half a dozen skirts of silk, and without that harsh rustle so abhorrent to smartly-gowned women.’ (Ready-Made Petticoats Of Heatherbloom, 1907)

Rayon taffeta is a slippery, thin and even sheer fabric. Today it is usually used as natural but cheap lining fabric for blazers and skirts.

‘Silk is very generally used for petticoats to be worn with tailored suits and dresses of wool, silk and linen. […] Taffeta, messalines and satins, while not so durable, shed the dust easily. They are very generally used. A wide range of colors is to be had, as well as black and white.’ (Clothing For Women: Selection, Design, Construction, 1916)

I chose pink rayon taffeta because petticoats for dark wool skirts were usually colorful as contrast to the black, dark gray or blue of the skirt:

This 1902 fashion plate shows a dark wool skirt worn with an orange silk petticoat underneath. 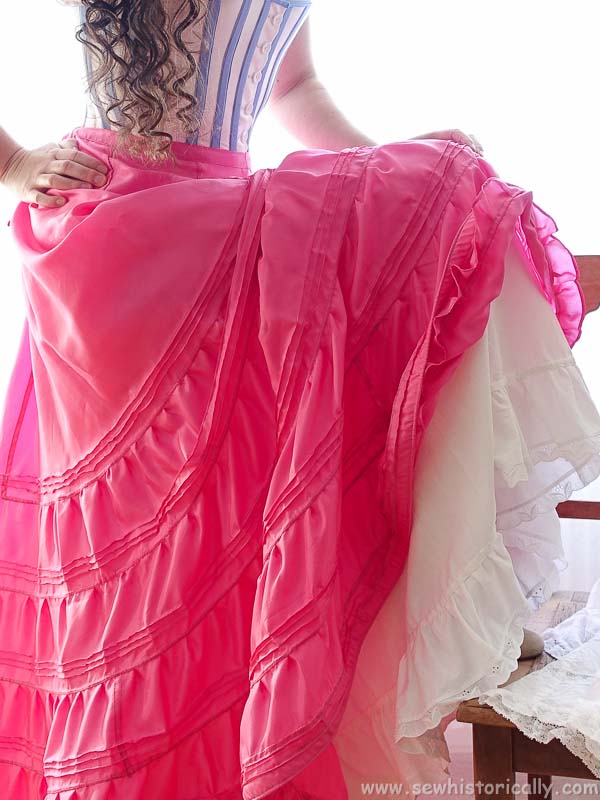 ‘With this season’s return to fuller skirts Dame Fashion has once more dictated that all petticoats or drop skirts must have some additional stiffening around the ankle and in many models almost to the knee in order that they may hang gracefully and not fall in around the feet, thereby giving a cumbersome and ungainly effect to the wearer as is so often the case with a superfluity of fullness.

A stiff interlining of some sort naturally suggested itself, but it was absolutely necessary that this be something light and easy to manage as women in general have at last taken a firm stand against such heavy and cumbrous skirts as were worn when interlinings were last in vogue. Yet to expect the new skirts to hang well with no support but an unlined petticoat was to court a certain disappointment.

When the Paris models began to come in it was seen that nearly all the new petticoats and drop skirts had some stiffening set in at the bead of the dust ruffle, while in a few it ascended to the height of the knee. Then some bright mind thought of putting in the petticoat a circular ruffle of very light weight haircloth, and so the puzzle was most satisfactorily solved by the Lily Haircloth Flounce as it is called.

I would’ve loved to use haircloth for the petticoat but I could only find haircloth that contained polyester. And furthermore, it would’ve been crazy expensive to use real haircloth up to the knees for this very wide petticoat that measures 5 meter around the hem! So I used two layers of sturdy cotton twill tape, which is more like cotton belting, instead.

Line ‘the flounce with a stiff lawn and cording with featherbone around the bottom, setting the skirt well out around the feet.’ (The Minneapolis Journal, 1906)

I also added a self-fabric dust ruffle at the inside of the hem because almost all Edwardian skirts and petticoats had a dust ruffle.

‘To the lower edge of the flounce is sewed a narrow, bias ruffle that holds the skirt out well from the figure and forms a dainty finish.’ (The Delineator, 1896)

This Edwardian purple taffeta petticoat has hem stiffening and a dust ruffle (scroll down to see the inside of the petticoat).

Edwardian (faux) silk petticoats often had rows of cording, tucks or pintucks as trimming and for additional support. Every tier of my petticoat has three rows of pintucks. Besides joining the tiers together, stitching the pintucks took the longest time! 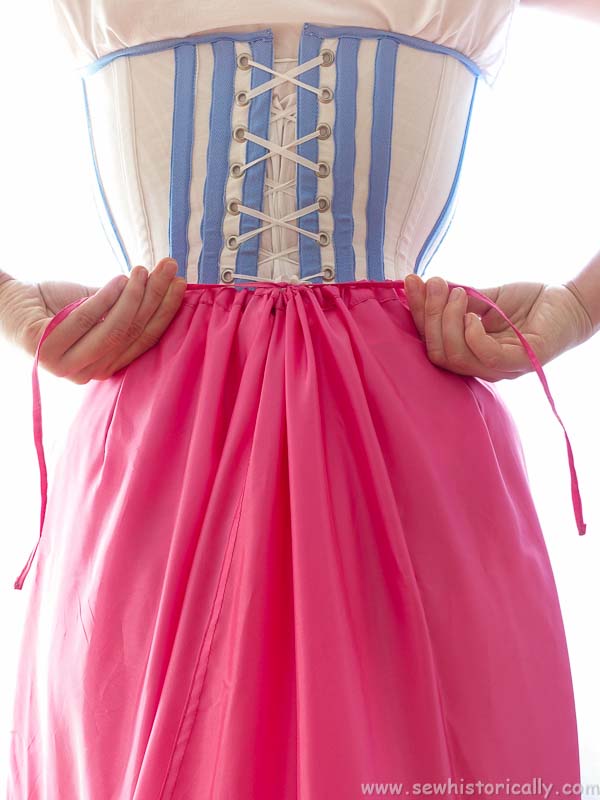 The petticoat is closed at the back with my typical Edwardian petticoat drawstring closure.

‘The top of the petticoat is finished with an under-facing, which forms a casing for tapes that are tacked back of the darts in the side-gores and drawn out through openings made at the center of the back, thus regulating the fullness about the waist and avoiding the need of a placket.’ (The Delineator, 1896)

All seams of my Edwardian faux silk petticoat are stitched fell seams. If you read my blog regularly, you know that this is my favorite historically accurate seam finish! 😉

‘Seams should be flat in finish, either a stitched fell or a plain seam overcast, if the material does not fray badly. Taffeta can be pinked. A stitched fell makes a better finish for brilliantine, because of its wiry, fraying qualities.’ (Clothing For Women: Selection, Design, Construction, 1916)

How To Join The Silk Petticoat Flounces

Flounces and ruffles of Edwardian petticoats were usually joined almost invisibly with a faux tuck. This faux tuck was called “receiving tuck” in the Edwardian era. 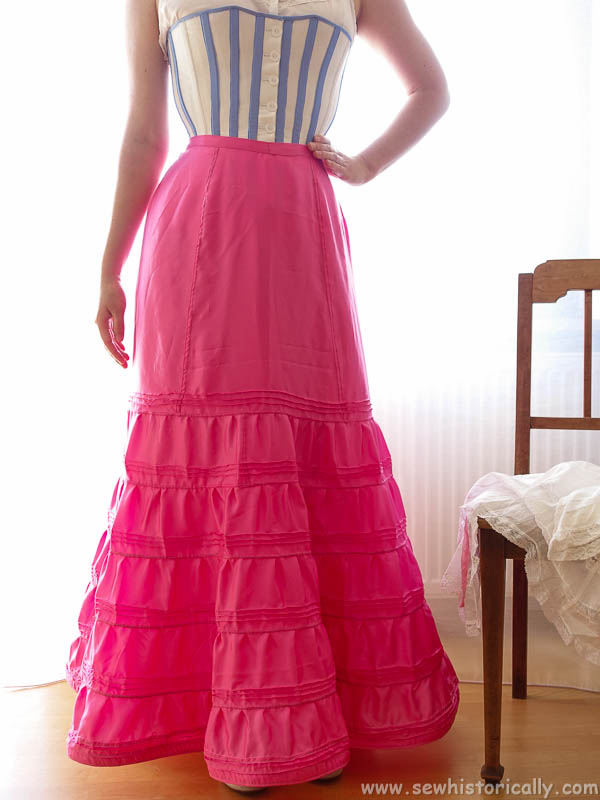 My Edwardian faux silk petticoat has pintucks as trimming which also help to stiffen the petticoat. Some Edwardian (faux) silk petticoats were also trimmed with lace or (self-fabric) double-edged ruffles, known as ruches or ruchings in the Edwardian era, like this antique 1900s silk petticoat at the MET museum.

‘Taffeta skirts trimmed with black lace are suitable for wear during the autumn and winter’ (Los Angeles Herald, 1900).

The petticoat ‘can be trimmed with ruches of the material’ (McCalls, 1904). ‘Deep flounces […] are headed with double ruchings […] around the bottom are rows and rows of narrow ruffles’ (San Francisco Call, 1901).

‘The trimming flounce is decorated with two silk ruchings, the whole arrangement increasing the flaring effect and making quite an elaborate foot-trimming.’ (The Delineator, 1896)

I thought about adding ruffles but I liked how the petticoat looked without trimming. So I left it as it is.

By the way, I thought this Edwardian faux silk petticoat would be a quick sewing project but it took way longer than i thought! But I like how it turned out. Now to make the wool skirt for my Edwardian shirtwaist costume! 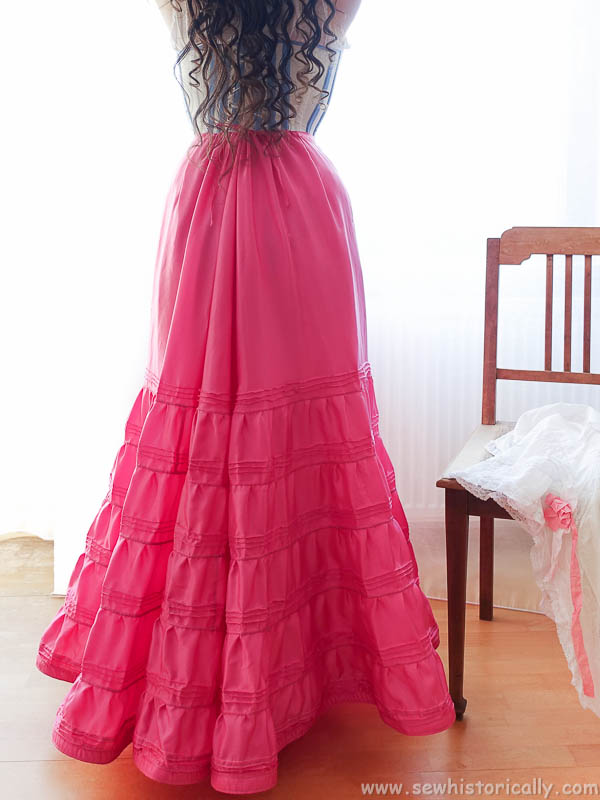