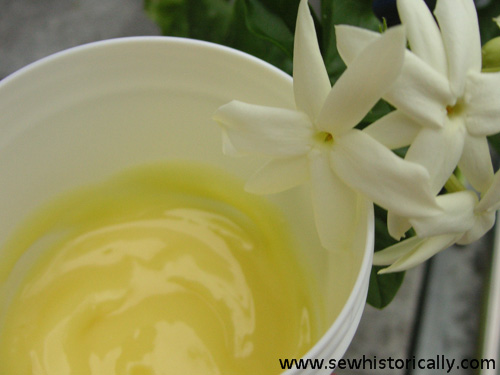 I’ve made another Edwardian cold cream. It’s the ‘1902 Rose Cream’ recipe (nearly at the bottom of the page).

Below is the adapted cold cream recipe which I’ve made: I’ve replaced spermaceti with jojoba oil, and as I had no almond oil at the moment, I’ve used jojoba oil instead, as well. Cold creams are usually rose scented. But this time I wanted to make a jasmine scented cold cream, so I’ve used boiled water instead of rosewater, and added about one or two drops of jasmine essential oil.

This cold cream is very similar to the ‘1916 Cold Cream With Rose Oil’ (in the middle of the page). It just calls for 4g instead of 7g beeswax. 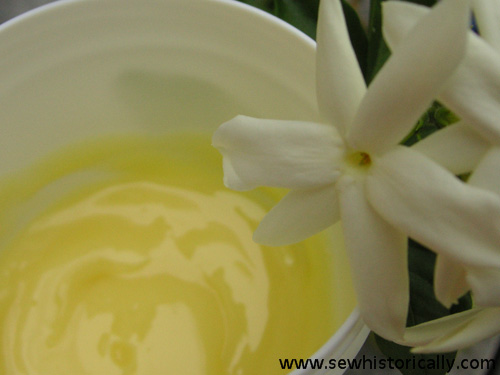 This is a very soft, greasy salve. (And the ‘1916 Cold Cream With Rose Oil’ with less beeswax would be still softer.)  I liked the other – 1850s and 1910s – cold creams better. Maybe, as they’d used spermaceti then, it would’ve been a firmer salve, but it would still have been greasier than the other cold creams. In spite of being very soft at room temperature, this cold cream firms up more in the fridge than the 1850s and 1910s cold creams.