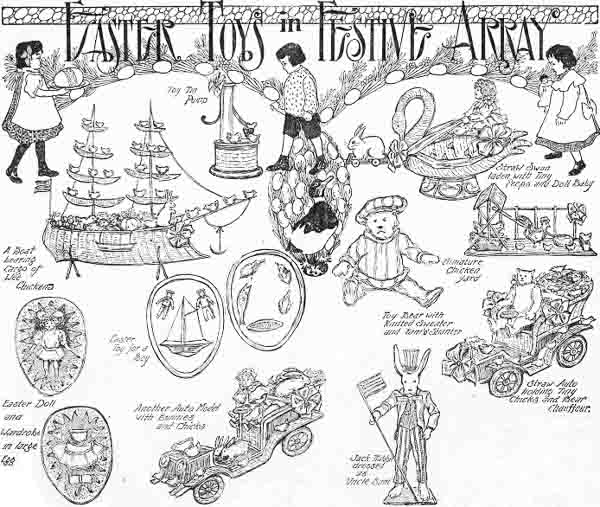 ‘In the language of the small child, “Easter is most as good as Christmas.” One readily accepts this conclusion after visiting the shops with their festive array of amusing toys and devices that delight the fancy of youngsters who still live in the land of Happy Delusion.

There are whole villages in Germany and Austria where the natives have been industriously designing and manufacturing Easter novelties all winter. Is it any wonder, then, why such a wealth of Easter toys should be found on shop counters? Children of no other nation are so plentifully supplied with suggestive gifts and candies as the sturdy American youngster. Hundreds and thousands of dollars are spent each year in this manner to regale youthful generations and perpetuate time-honored traditions.

Mechanical machines six inches in length to the really elaborate models of straw and wicker, selling for $5, $6 and $7, are available in the shops, laden with tiny chicks and goslings. Jack rabbits and white silky bears pose as chauffeurs dressed in appropriate garb. The smaller machines are fashioned of imitation Irish moss touched with gilt, the running gear being of tin, gilded. One of this description decorated with wee chicks and a small Jack rabbit Bells for 75 cents. The larger models are faithful copies of the genuine machine, and there are a score of different patterns, too. Two exceptionally good imitations are shown on this page sketched from one of the shops in town. The one to the right is made of willow green straw and natural colored wicker. A nest of tiny twigs on which are perched a mother chicken and her brood of little ones occupies the rear portion, the remainder of the family being scattered in the front and along the sides. A large white silk bear, with a chou of blue ribbon under his chin, acts as the chauffeur. Bows of blue ribbon also decorate the machine. The auto to the left is a different model, laden with bunnies, chickens and with a doll as chauffeur. The larger and more expensive machines, as well as the cheaper ones, are wound up and run on the floor; the latter are made very substantially and will continue service as a toy long after Easter has been forgotten.

Straw and wicker are favorite decorations for Easter toys. Two sketches are also given on this page which show to good advantage the genius of the toy designer. One of the most artistic decorations displayed this year is a large white straw swan with its neck characteristically arched and its back so shaped as to form a boat, thus accommodating a doll and scores of little chicks, some of which are peeping outside of the straw wings. On the swan’s breast reposes a large bow of pink ribbon to which streamers are attached and held in place by the doll’s hands. Ribbon streamers are twisted about the sides to emphasize the curve of the wings.   This most attractive design is price-marked $7.50, not an extravagant sum when the clever workmanship is considered. The same piece could be nicely used as a table decoration filled with moss and cut flowers for a child’s Easter party.   What could be more delightful for a child than the boat containing wee chickens in every nook and corner, even on the riggings and mast sail?

Bears are great favorites with children, especially those that do mechanical stunts. Bears that do not boast of these entertaining attributes, but who nevertheless are dressed in knitted sweaters and Tam o’ Shanters, are sold for 50 cents apiece. A sketch is given of a baby cub having a fine, white silky coat. His head and feet are easily moved, and his anatomy sufficiently elastic to enable him to do several athletic feats standing upright on his front paws being one of them. This little chap is only fifteen inches high, but almost life-size baby cubs may be had from $7 to $10 and $15, and are sufficiently natural looking to make one involuntarily take a step backward.

Jack rabbits are dressed in all sorts of amusing attire, and are called upon, to carry nests of wee chickens on their backs, drive little pigs of pink bisque, pump water for thirsting goslins, and, in short, act as a general utility man, not forgetting to parade as Uncle Sam. Jack rabbits and bunnies are sold in paper mache for 10 cents, large sizes selling for $1.50. Many rabbits have carrots in their paws and the mechanical ones carry them to their open mouth and down again.

There is a great abundance this year of inexpensive toys which are really quite cheap considering the work that is put upon them. There are several models of clever little chicken yards and houses of imitation wood containing several happy families. Little nests of imitation wicker perched on sprigs forming a sort of wheelbarrow and filled with chickens are novelties selling for 10 and 15 cents, according to size. A little tin pump, with several cotton chickens perched on the edge, retail for the same prices.

Paper eggs filled with a nest of chickens come under the novelties for 25 and 50 cents. Eggs of paper also contain a doll baby on one side and her wardrobe on the other. This design is available from 50 cents to $2. A sketch of this model is given. There are several styles in these eggs for girls and a number fitted out for boys having a tin ship, sailors, a boat and fish, besides ducks. Another egg of a larger size sure to bring joy to the heart of a boy contains a tin horn, a small gun and a leather cap. Very attractive are the many little vehiclelike affairs of straw filled with eggs or chickens and drawn by bunnies, bears, ducks and roosters. One or more bunnies or Jack rabbits hiding in a lettuce head eating a carrot top is ever so picturesque, and sure to meet the approval of youthful minds. These bunnies are of white cotton, papier mache and white fur.’ (Los Angeles Herald, 1906)