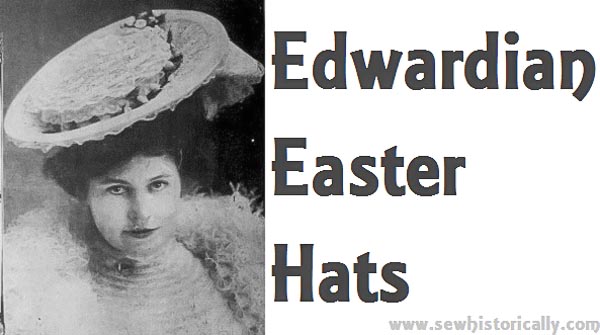 ‘Have you bought your Easter hat? It is certainly time to select something, and it is getting along into the days when one cannot longer postpone the hat crisis. […] That she who buys her millinery now pays two prices for it may be true. But it is also true that the first millinery is worth double the price of the later offerings. […] There is a new look about the early season millinery that is never observed later on.

It is really a mistaken economy to wait before purchasing, for this is the season of new hats, and if you do not have something new you stamp yourself as hopelessly out of date. You cannot make up in any other way what your hat is to your costume. For the hat, to a great extent, governs the suit. With a hat worth a good round sum one will look well dressed even though one’s gown be a little passe. The hat shows first; it is the most noticeable single feature of one’s costume, and it is the article which stamps the attire and by which a woman is judged.

It has been claimed that the first millinery of the season is never desirable, for the reason that it so soon goes out of style. But this is true only to a limited extent. The right kind of millinery does not go out, and the woman who selects her hat well can wear it all the season.

Just at the moment one sees very many of the extremely small hats. And the tiny little toques, made of straw and silk, with a bunch of loops at one side, are becoming and very Frenchy. On the other hand the picture hat is here, and, if one wants to pay a great deal, one can go into the picture hat department and get something that is as costly as one could wish. […]

One of the lovely picture hats of the season had two feathers, each nearly a yard long. The top of the hat was lace and the feathers stood high at one side, trailing far down the back. A hat of this kind is a good investment, for the reason that it can be worn all the year around and, after all, this is the way a hat should be. It would surprise you to see how many hats are of the all-the-year-around variety, and Easter hats at that. In the windows of the military shops 50 per cent of the hats, can be worn all the year and the milliners say there is a growing demand for hats that are just as good in November as in April. […]

Mrs. Grover Cleveland is a woman who wears an Easter hat, for she comes out regularly in the spring; with a handsome light cloth dress and hat to match. Her gown this year is a pale gray lined with white. Her hat is a gray straw with gray quills. Quite a Quakerish garb you would say were it not for the fact that there seems to be a flush of pink in the gray, a peculiar tone, which makes it almost a mode color.

With each gown this season we are making two hats. One is a picture hat, a great spreading handsome thing with a wind veil with flowers and with lace, with plumes maybe, and with beautiful ornaments at the side. The other is a neat little toque, a little calling hat, or a hat for the matinee. With these two hats the costume is much more complete than if there were only one hat with it. Very often a change of hat quite changes the gown. […]

The woman with not very much money, who is trying to pick out a hat that will last her all the season, is safe in getting a sailor. She can select one of the new shapes and she can be sure that it will be pretty until the snow flies. Of course the sailor is not a dressy hat, but if prettily trimmed, it will hold its style for general wear all the season. […]

The woman who wants a hat for all the season wear is safe in getting an all-flower hat. The hats are fashionable every spring and, except for a slight variation in shape, they are made very nearly the same year after year. This season there is the violet toque, which is rather pointed in the front, and many of these toques are trimmed with roses at the side, making a truly French combination. An all-violet toque, with a mass of roses at one side, and perhaps some heliotrope mixed in with the roses, makes a beautiful hat for dress wear all the year.’ (San Francisco Call, 1 April 1906)

‘No Easter woman but wants a hat to match her gown, and it may be pleasant to know that the round chip hat is in this season, with the sides slightly uprolling and the top trimmed with velvet and roses. Round straw hats trimmed with velvet and roses can be converted later into Gainsborough straw hats trimmed with plumes. It takes only a turn of the hand and the side of the crown rises, and over the top there can be trained a feather with charming grace.’ (San Francisco Call, 1903)

‘There is a saying among common folk that the first hats of spring are there only to be gazed upon and that no one ever really buys them and wears them. Like most old sayings, this has come to be utterly routed and refuted and replaced by a new one. The Easter hat, as shown in the first windows of spring, is there this year to be sold, and afterward worn, and well is it worthy its exalted destiny. What is more, it is to be sold earlier this year than for seasons; and it is now the style to have a spring hat much before Easter, one that can be worn later, while for Easter there is reserved the brilliant piece of headgear.

Too bright the Easter hats may seem, and too large and too wonderfully trimmed, but the brilliancy may be partially explained away under the supposition of contrast. The winter hat was dark and the Easter hat is light. Seen together, one following the other directly, the hats of Easter seem too bright for good taste, but later, when all are wearing them, and the colors are rivaled by the rays cf the sun, they will seem none too loud. […]

For an Easter brim drapery there will be many a chiffon length used and many a bit of tulle veiling. The veiling, as it is known, is a little heavier than chiffon and is covered with French dots. The French dot is made of velvet and is different on opposite sides of the veil, white on one side and black on the other. […] The matter of dotting a veil, be it chiffon or gauze, is a thing not serious enough to deserve a minute’s consideration. It can be accomplished by cutting out the lozenges of velvet and “tacking” them in place, or by fastening them with half a drop of mucilage.

The flower hat is to be the most sensational of spring. To illustrate this there may be mentioned a little round hat with a top and brim entirely of violets. The whole hat is a mass of these flowers. Around the edge there are many green leaves. Another hat, a flower hat, has a brim of roses, while the top is of green leaves laid on like a thatch. […] The little flower bonnet is not in style. No bonnet is. But the floral toque has replaced it and is worn set down upon the hair and upon the top of the pompadour.

Few will be the small hats. Hats will project, if not over the face, at least over at one side, so that the appearance of a large hat is preserved.

There is a tendency toward the three-cornered hat and the brim of the hat is turned sharply up at one side and draped with bands of velvet ribbon, to give the effect of a tri-cornered hat, tied with gold cord. This is really pretty and very chic. […]

The Easter hat in certain of its varieties will be turned up at one side. The hats that are turned down in front and turned up at the back will be seen, but by far the most popular hat will be the one that has its side tilt. The perfectly round hat, with its small curling brim, is made to tilt by an arrangement of bandeaux. […]

The trimming under the brim will trail upon the hair and it will be, if not a bird trimming, then flowers. The bird that poises under the brim is very pretty, but the flower treatment is best for spring. The chiffon scarf is good under the brim and is very graceful as it sweeps the waves of the coiffure. […]

It is a noticeable fact about the coming Easter hat that simplicity is aimed after and accomplished. This is quite contrary to the complicated arrangements of last Easter. […]

The wire hat is to be very popular. This is the hat made of wire underneath, but bent and shaped to the head. It is afterward trimmed with maline and chiffon and with veiling and flowers, until it becomes a hat. Toques are made in this way and the loveliest of little flower hats. […]

The modish hat requires not one, but three veils, all worn together, though each in its appointed way. […] The complexion veil is the very thin one that comes next to the face. It is in rose color and gives a pretty glow to the cheeks. Then there is the veil that is draped around the brim of the hat, the plumage veil it is called, because if there be a bird’s breast around the brim it holds the feathers in place. Finally there comes the medium heavy veil, all dotted, or squared or open meshed – the show veil – that falls from the hat brim over the face. It is merely a matter of arrangement, the wearing of these veils, and not so very difficult when one becomes accustomed to handling them.’ (San Francisco Call, 1902)