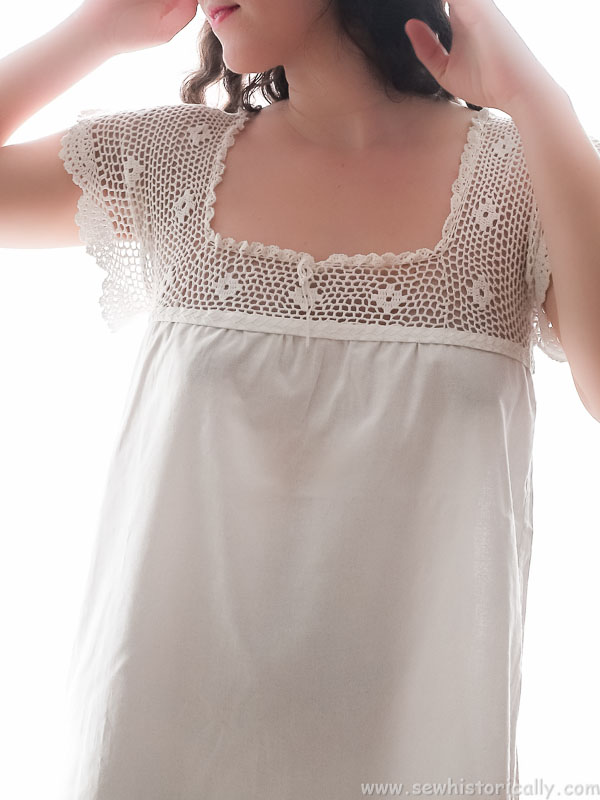 ‘This is a comfortable kind of gown, requiring little time to make, […] serviceable […] with sleeves’. (Clothing For Women: Selection, Design, Construction, 1916)

I always wanted to have an Edwardian chemise with crochet lace yoke. But to save time I didn’t crochet this yoke from scratch. Instead I used leftover pieces of a crochet tablecloth-to-skirt refashion to make this yoke! 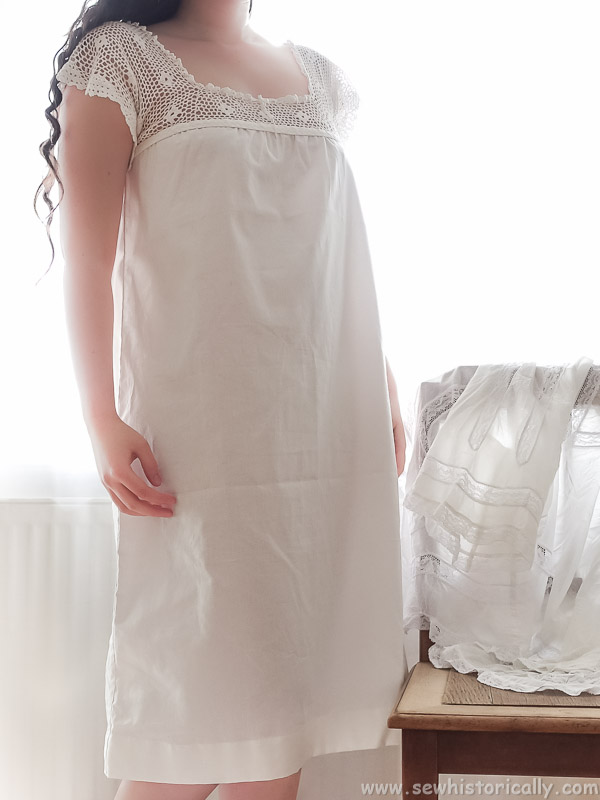 But crochet yokes were not only used for chemises and nightgowns, they were also used for camisoles and combinations.

The crochet yokes of this antique Edwardian camisole and this combination were also inspirations for my crochet lace yoke. 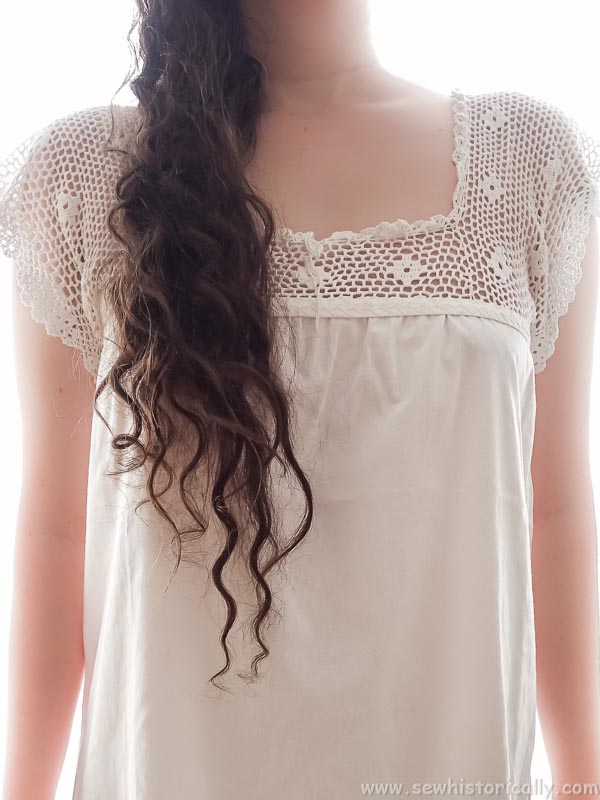 As I mentioned before, I didn’t crochet the crochet yoke from scratch. Instead I used leftover scraps from a refashioned crochet tablecloth and sewed and crocheted the crochet lace strips together, like on this Edwardian crochet lace yoke.

After gathering the top of the chemise, I basted the crochet yoke to the chemise. Then I covered the raw edge with binding. 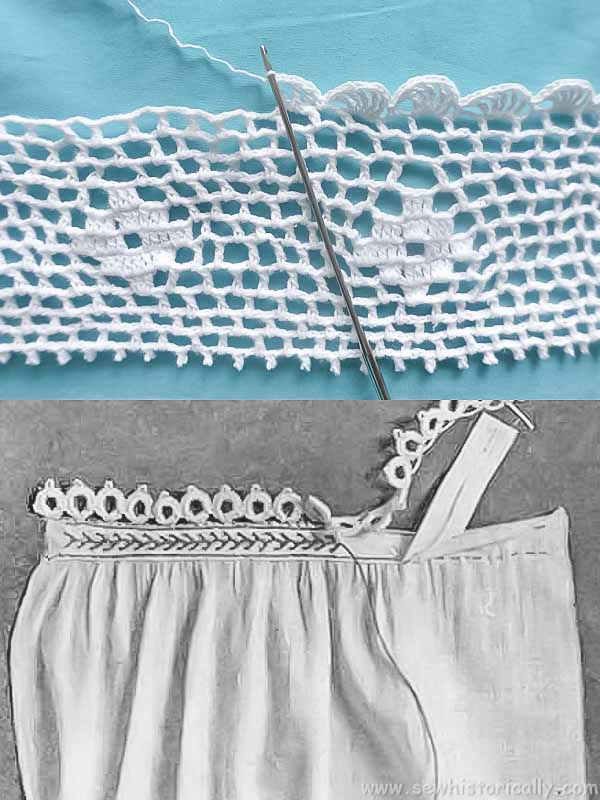 Lace may then be overhanded to the braid. If bias bands are used, featherstitching, lazy-daisy or some such decoration will add to the appearance of the garment’. (Clothing For Women: Selection, Design, Construction, 1916)

Feather stitch embroidery was very popular in the Edwardian era: It was used to embellish dresses and underwear. I embroidered the binding with a row of feather stitching.

‘Just below the neck is a line of featherstitching’. (Clothing For Women: Selection, Design, Construction, 1916) 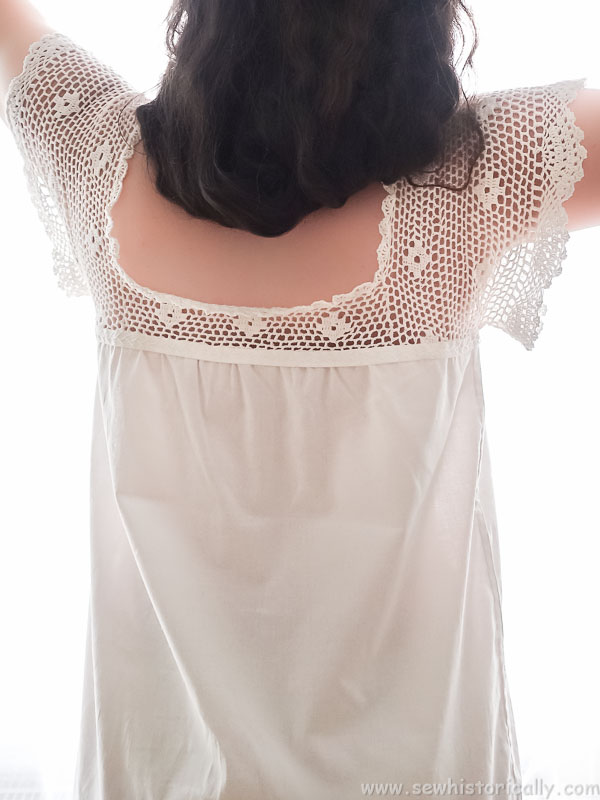 While Edwardian nightgowns are ankle-length or even floor-length, Edwardian chemises are usually just knee-length.

‘Try night-dress on to see that the shoulder seams, neck and armhole lines are good. While the dress is on, have the line at the lower edge turned, the length to be determined by individual taste. Marking at the floor will in very thin materials allow enough for shrinkage.’ (Clothing For Women: Selection, Design, Construction, 1916) 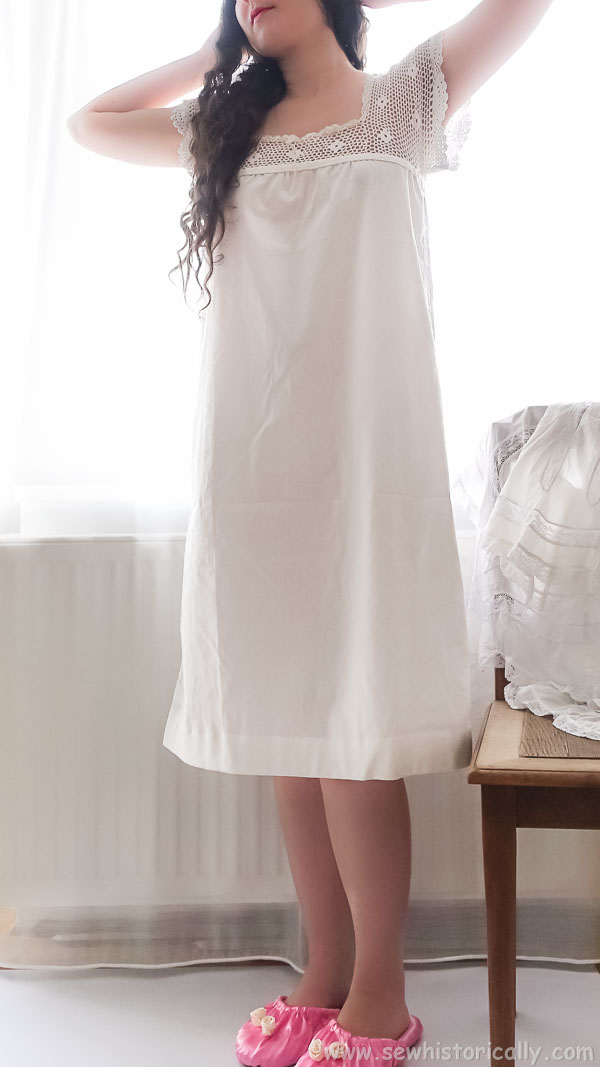 I finished all seams of the Edwardian chemise with felled seams – a popular seam for Edwardian lingerie. Felled seams are my favorite seam finish too because it’s a durable seam and it lies flat: therefore it’s easy to iron. And you can sew the seam on all sewing machines – even on old straight-stitch only sewing machines!

Chemise or nightgown seams ‘may be hemmed fells, stitched fells, or French seams’. (A Manual Of Home-Making, 1919) ‘Strive to avoid any unnecessary bulk or thickness. Use stitched fells’. (Clothing For Women: Selection, Design, Construction, 1916)

‘The French fell is commonly used in ready-made underclothing and, in many instances, in finishing the seams of home-made garments; but the ordinary fell seam, made by hand or machine-stitching, provides a neat, smooth finish which is generally liked, as it is nearly flat.’ (The Delineator, 1890)