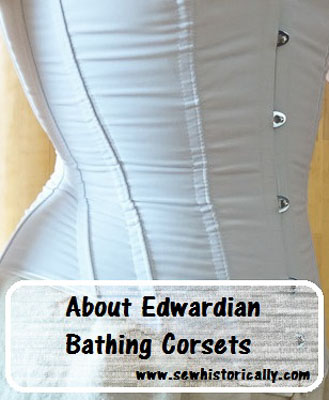 In 1896, Harper’s Bazaar tells its readers that ‘unless a woman is very slender, bathing corsets should be worn. If they are not laced tightly they are a help instead of a hindrance to swimming, and some support is needed for a figure that is accustomed to wearing stays.’

In 1901, The Woman’s Book of Sports warns that ‘nothing thight should be worn while swimming, no matter how fashionable a dress may be for bathing […] a swimming costume should never include corsets’.

‘Her dress is on the utility style […] that make a corset unnessary. Though, speaking of corsets, it may be said that the bathing corset is a good thing. It is made of plain white canvas with a few bones in it and a good stout lace at the back, which may or may not be tied tightly. It holds up the figure, supports the back, and, if one is accustomed to a corset, it is better on than off. The dire backache and the lassitude which follow sea bathing can frequently be traced to the fact that the bather takes off her support and then takes the most violent exercise of her life, battling with the waves of the deep sea. There come bathing corsets this year in many shades of pink and blue, yellow and florid goods.’ (San Francisco Call, 1902)

In 1910 Every Woman’s Encyclopaedia states: ‘There is a demand, that annually grows, for bathing corsets, which certainly add symmetry to the figure and help the wearer so to adjust her costume that it looks well and feels so, in the surf and out. They are a more pronounced fashion in France than in England – where sea bathing is a mode with little prestige about it – and in America are very widely patronised.’

This 1917 advertisement says that it isn’t necessary to buy a special bathing corset because their corsets are now rust proof.