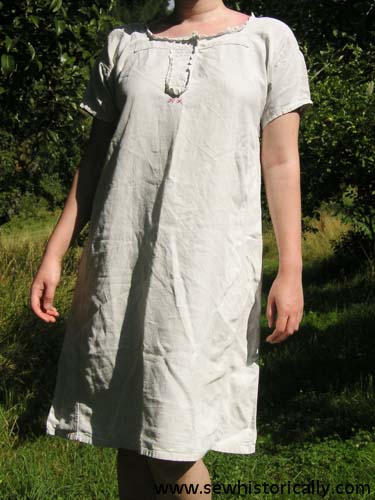 A while ago I bought this antique Victorian or Edwardian 100% linen chemise.

The chemise is light grey, really heavy and soft – probably because of the washing and mangling. The fabric might be hand-woven, and is very dense (unlike modern linen fabric). 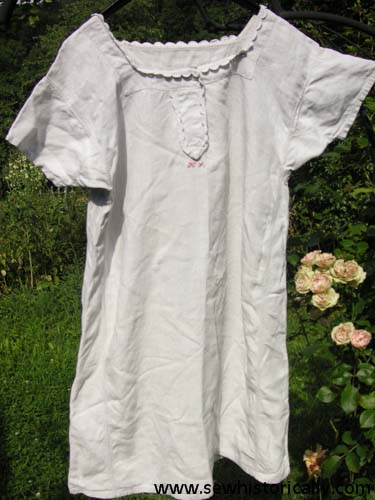 The chemise is 100cm long, measures 55cm across the chest, 75cm from sleeve to sleeve, and is 75cm wide at the hem. The chemise was sewn on a straight stitch only sewing machine, but there’s also some handstitching. 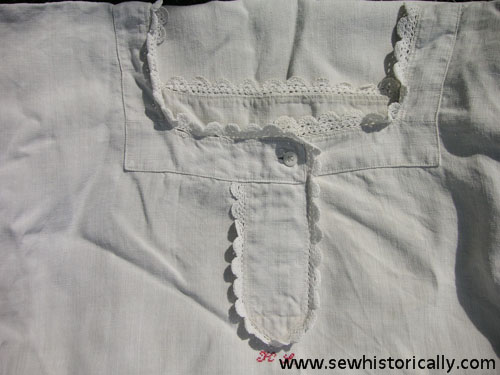 The chemise has a square yoke which is trimmed with delicate 1,5cm wide crochet lace. 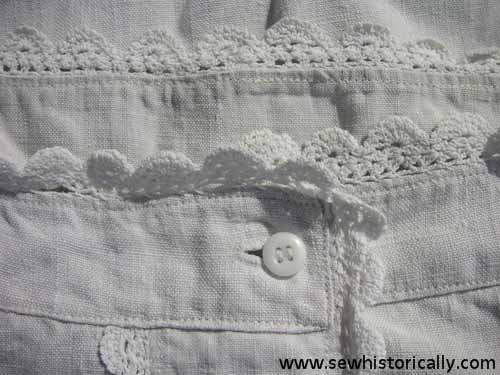 I think the lace is hand-crocheted with light grey linen or cotton thread – the thread of the crochet lace is thinner than modern linen sewing thread. 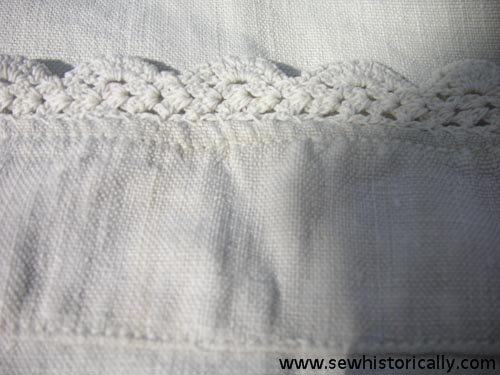 The crochet lace is overhanded to the yoke which was the usual method around 1900 to attach lace. The sewing thread might be the same as the crochet thread. 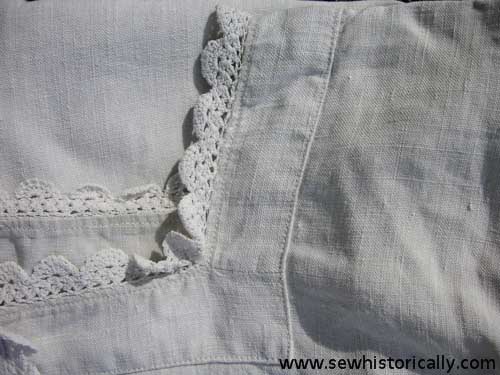 The square yoke is finished with fabric strips. The yoke measures 28 x 25cm. The strips measure between 3 and 3,5cm – they aren’t cut perfectly straight. 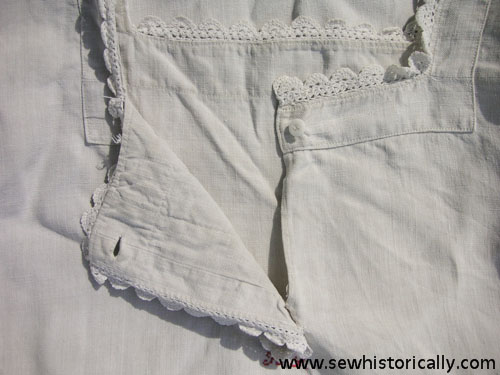 The front opening is 16cm long and closes with a button and neatly hand-sewn buttonhole.

The placket is finished with an extra piece of fabric and with an 0,5cm wide seam on the lower flap. 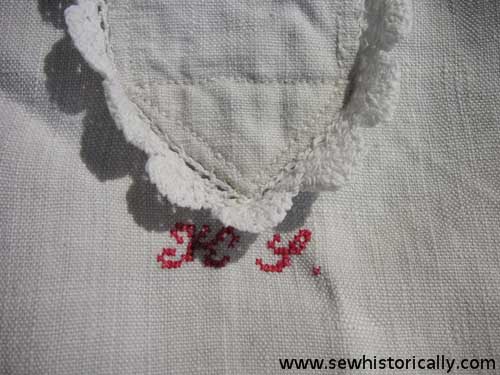 There’s a hand-stitched monogram ‘K S.’ under the opening; it measures 1 x 3cm. Chemise monograms are often worked in satin stitch but this one is cross-stitched. Cross stitch embroidery was especially popular around 1910: ‘the new cross stitch embroidery […] is on everything from household linen to party gowns this season’ (San Francisco Call, 1911). The monogram is stitched with thin red thread – it looks and feels like linen thread. 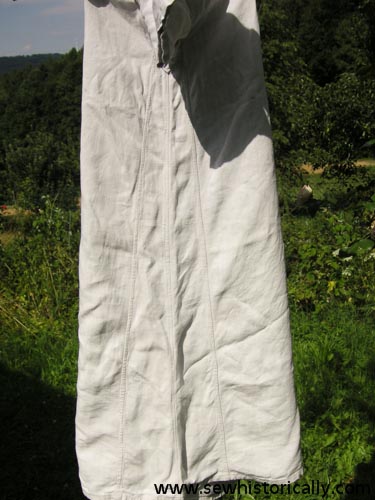 There are two strips of fabric attached at each side – the usual construction method for Victorian and Edwardian chemises. This was done to save fabric and to make the chemise wider at the bottom. Each strip adds about 11,5cm to the chemise at the hem.

So the 0,5cm wide flat felled seam is just stitched down without turning the raw edges under – the usual Edwardian seam finish where selvedges meet: ‘The edge […] if selvedge, remains unfinished.‘

The other seams are finished with flat felled seams – the usual Edwardian seam for lingerie underam seams.

Some parts of the flat felled seams are frayed. 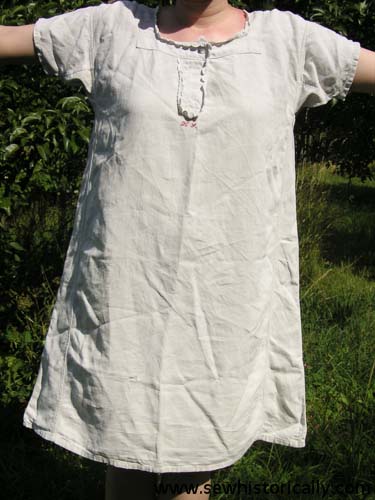 The sleeves of the chemise are made with a 13 x 34cm piece of fabric. 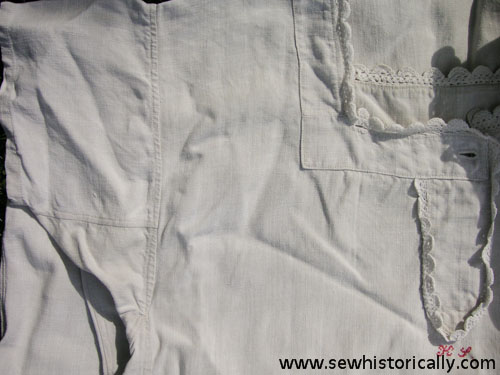 The chemise has underarm gussets. 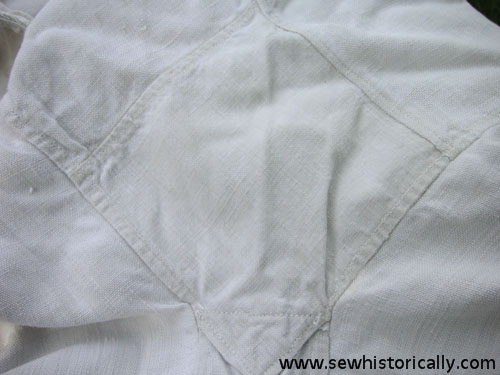 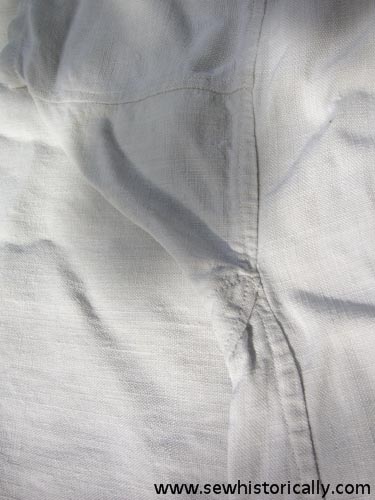 The bottom triangle of the underam gusset, where the chemise is most likely to rip, is especially reinforced.

All seams of the sleeve and underarm gusset are finished with flat felled seams.