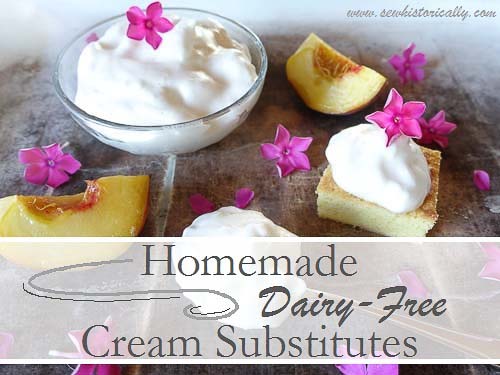 If you read my blog regularly, you know that I’m allergic to milk products. So all my recipes are dairy-free and some are also vegan. Because I loved whipped cream before I developed the dairy allergy, I thought I’d try store-bought whipped cream substitutes. But they left me disappointed: They didn’t whip very well, and I didn’t like their artificial – and sometimes even chemical – taste. But that didn’t stop me: I searched the internet for homemade dairy-free cream substitutes.

‘It is a good substitute for cream and gives the coffee a fine taste.’

‘Put one pint of rich sweet milk into a porcelain saucepan and set it into a pan of boiling water over the fire, beat the white of one fresh egg with one teaspoonful of white granulated sugar to a stiff foam, then beat the yolk and stir the white into it and stir it quickly into the hot milk, (it must not boil) and take it off the fire. Beat it together a minute and then pour it into a cream pitcher.’ (Domestic Cook Book, 1888)

‘Pour half a pint of boiling milk on a teaspoonful of arrowroot well mixed with a small quantity of the milk. Stir the mixture well; have the white of an egg well beaten, and when about half cold add it, and place the whole over a slow fire until it nearly boils – then strain for use.’ (The Young Wife’s Cook Book, 1870)

Victorian Substitute For Milk Or Cream

In tea ‘it is difficult from the taste to distinguish it from rich cream.’

‘Beat up the whole of a fresh egg in a basin, and then pour boiling tea over it gradually, to prevent its curdling’. (The Illustrated London Cookery Book, 1852)

Beat arrowroot with a little cold milk, add the other ingredients, ‘then put it into hot water and stir it one way, until it acquires the consistence of cream.’ (A Cyclopædia of Practical Receipts, 1845)

‘The nut butter can be easily mixed with water, forming an emulsion, and by thinning it sufficiently, it makes an excellent substitute for cream and milk.’ (Guide For Nut Cookery, 1898)

Cream To Serve With Fruit Pies

‘Scald the milk, with the salt and sugar; reserving a little of the milk in which to rub the cornstarch. Add this to the milk when boiling and stir till thick as cream. Serve in a pitcher when cold, as a substitute for cream for those who like this accompaniment.’ (How To Cook Well, 1886)

‘Mix half a spoonful of flour with a pint of new milk; let it simmer five minutes to take off the rawness of the flour; then beat up the yolk of one egg, stir it into the milk while boiling, and run it through a fine sieve.’ (The Complete Cook, 1843)

‘Three eggs and break them into a basin, beat them well, then add hot water (gradually) half a pint, and beat them again until quite smooth.’ (The Cyclopædia of Practical Receipts in All the Useful and Domestic Arts, 1841)

‘This will not “whip” but is for use in place of plain cream on fruits, puddings, etc.’

‘To the stiffly beaten whites add sugar and corn starch, beat constantly and add gradually the cold milk. Heat a cupful of milk to boiling point, melting the butter in it, beating in the first mixture. When thickened like cream, remove from fire, strain, and set on ice.’ (The Progress Meatless Cook Book, 1911)

‘Peel and grate the apple, add white sugar, egg white; beat all together a long time, flavor with vanilla or grated lemon rind. Mix the apple with the sugar as soon as possible or it will turn dark.’ (The International Jewish Cook Book, 1919)

‘You may like this “whipped cream” topping for desserts better than the real stuff!’

‘Heat a small teacupful of milk, with a pinch of soda in it, and stir into it the cornflour, which should be previously wetted with a little cold milk, add the white sugar, and cook for three minutes. Pour the mixture into a small basin, and beat in the frothed whites of 2 eggs; whip to a cream, and let it get cold.’ (Tasty Dishes, 1880)

Soak the gelatin sheet for 5 minutes in cold water, then dissolve in 1 tbsp hot water. Cook sugar and water till the sugar is dissolved. While beating the egg whites, slowly pour the syrup and dissolved gelatin into the egg whites.

-> Video of the 1920s Whipped Cream Substitute on my instagram

Soak gelatin sheets for 5 minutes in cold water. Stir together flour, sugar and water or soy milk, and bring to a boil. Remove from heat and stir in the soaked gelatin sheets. Beat until stiff. (Kiehnle Kochbuch, 1969 [1921]) If you want, you can flavor the whipped cream substitute with homemade vanilla sugar or homemade vanilla extract.