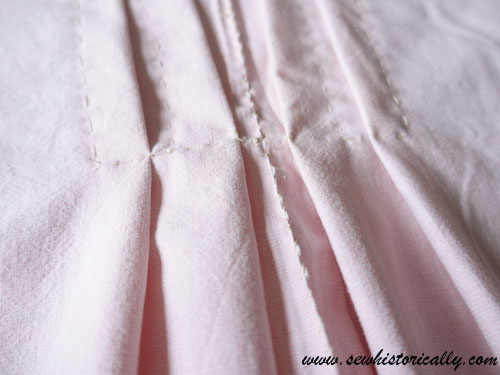 I’d gotten an old cotton or cotton-linen blend sheet in a lovely pale shade of apricot to make something with it, but sadly the middle part was very thin and badly torn, so I had to cut it away. There wasn’t much good fabric left, so I thought I’d use it as pattern-making fabric. But while making a pattern for medieval or renaissance bias-cut fabric stockings, I thought the fabric was too lovely to waste it like that.

Inspired by this pretty apricot-colored, unlined, 18th c reproduction jacket, this peach striped linen reproduction round gown and this antique, late 18th century, plain, pieced shortgown, I thought I’d try if there’s still enough fabric for an 18th c caraco. Pink and flesh color was worn in the 18th century (source). Madder was used to dye fabric red or pink in the 18th century: pink would’ve been cheaper than red.

I used 18th century period sewing techniques: mostly running and overcasting stitches. I used butted seams where two selvedges met, and run and fell seams for the side seams. A great source what types of seams were used in 18th century clothes construction can be found here (pdf file).

In the 18th century, linen thread was used to sew linen or cotton clothes (source): I used half-bleached linen thread.

I had to piece the fabric because there wasn’t much left, and the leftover fabric wasn’t very wide – but that’s period accurate (source). But most of the piecing is hidden: The back piece is joined by a middle seam, and I had to add extra fabric for the side pleats. 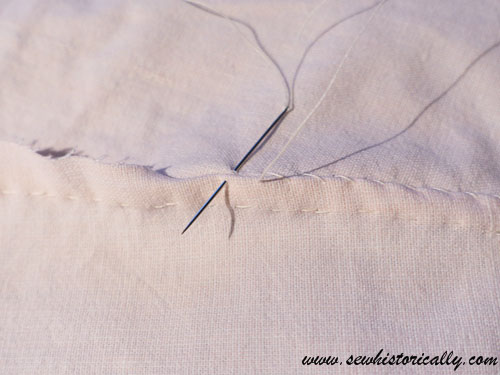 For the side seams I used a flat-felled seam which was also called plain fell, felled seam, hemmed fell, run and fell seam, overhand or french fell – a seam which was used in the 18th century when two raw edges met.

I’ve never before set sleeves the 18th century way, but here’s a great tutorial how to set in 18th century sleeves.