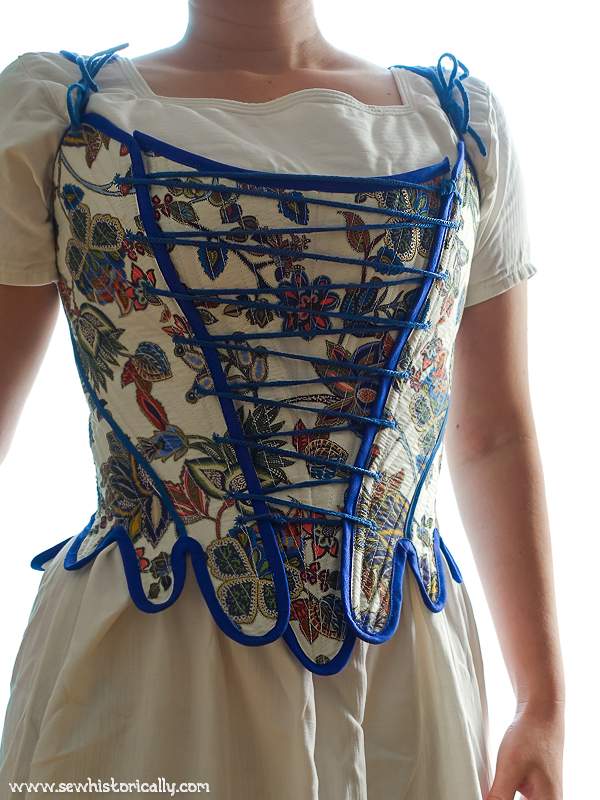 Because the fabric is so lightweight and flimsy I used it as outer layer, and stiffened the fabric with ordinary white cotton fabric as middle layer and stiff white cotton canvas as inner layer.

For the 18th century chintz stays, I used my typical 18th century stays pattern but I adapted it for stays with a separate stomacher.

After cutting the pattern pieces, I quilted the three fabric layers together with closely spaced boning channels. Quilting the fabric layers together already stiffens a corset more than you’d think. But I also stiffened the stays with German synthetic whalebone boning. So the 18th century chintz stays are now as stiff as other 18th century stays despite the flimsy fabric! 😀

After dyeing I sewed all 36 eyelets with the blue dyed linen thread by hand.

After sewing the eyelets, I used the blue dyed cotton yarn to make lacing cords for my stays. If I make handmade lacing cords, I usually braid the yarn together. Depending on the yarn and purpose, usually something between a 3-strand and 7-strand braid.

But if you need very long lacing cords like I needed for these stays braiding lacing cords is rather difficult because the yarn ends always get tangled. Therefore I tried two historical ways to make lacing cords: fingerloop braiding and lucet braiding. But I didn’t like how the handmade lacing cord looked in either technique. Twisted cord also didn’t work because it was to small and round to be used as lacing cords.

So finally I made knot crochet cord like here. It’s not just an ordinary crochet cord. It looks beautiful like soutache or a fishtail braid: it’s even, flat, strong, not too thick and doesn’t stretch – so it’s perfect as DIY lacing cords. Even if it’s probably not historically correct, it was the best option to make the long lacing cords I needed for my 18th century chintz stays.

And to make lacing the spiral laced stays easier, I also made a metal wire lacing tip – aka aglet – inspired by historical metal aglets.

Click on the link below to see how the 18th century chintz stays look when worn with my peasant woman outfit: