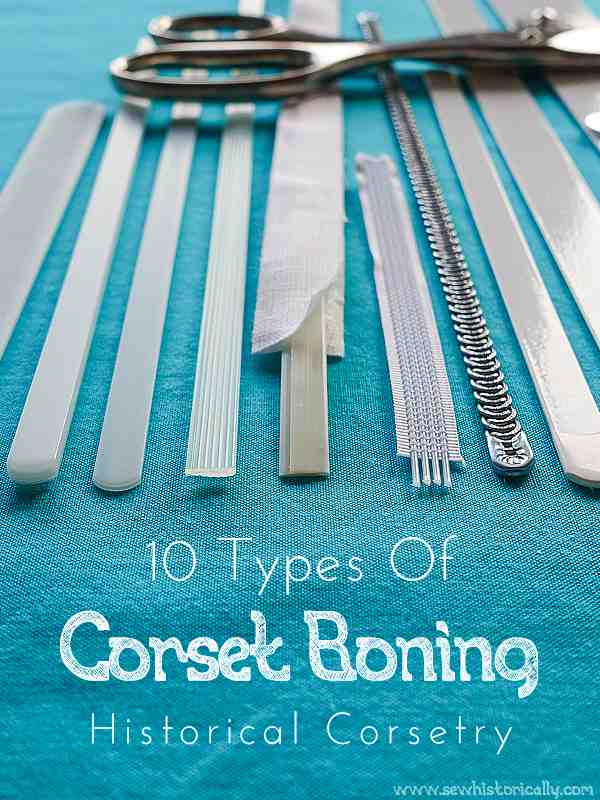 Historically, corsets were stiffened with whalebone (baleen), whalebone substitutes – such as horn and featherbone – and later flat steel boning.

‘The corset furnishes the foundation for proper dressing. No woman wishes to look like a shapeless dowdy. To obtain a smooth and artistic fitting dress waist she must have the proper foundation to build on, and nothing furnishes this better than a light, smoothly fitting corset that conforms to every line of the body.’ (Talk Upon Practical Subjects, 1895)

Antique stays and corsets from the 18th century, Victorian era and Edwardian era were usually stiffened with whalebone. Baleen is a filter-feeding system inside the mouths of whales. Whalebone was flexible, stiff and lightweight and could be shaped with heat and moisture. Therefore over time corsets with whalebone adapted to the curves of the body and they could also be steam-molded.

‘Whalebone is not bone, but bears a strong resemblance to the horns of cattle and the nails and hair of other animals. In preparing the raw blades for commercial purposes, they are first boiled in water for several hours, until soft enough to cut easily with a knife. The workmen then cuts them into different lengths and thicknesses, after which they are dyed black.’ (A Complete Dictionary of Dry Goods, 1892)

In the Edwardian era, whalebone became scarce and expensive. Therefore the Edwardians experimented with different substitutes but nothing was obviously as good as real whalebone for corsets.

‘Whales furnishing the right quality of whalebone have become very scarce of late years, owing to the steady annual slaughter […] The average price of whalebone in the raw state for the year 1854 was 34 cents per pound; […] 1892, §5.50 per pound. These figures show that the supply is rapidly diminishing […]

French horn has been utilized to a moderate degree, but its high cost has limited its general use. Coraline is another article which is largely used. […] Watchspring steel for dress stays has probably received as general recognition as anything, and is to-day doubtless the leader for such uses. The material known as featherbone is also used to a large extent. It is conceded, however, that nothing has yet been produced which answers all purposes as well as the old reliable whalebone.’ (A Complete Dictionary of Dry Goods, 1892)

‘Efforts have been made to substitute [whalebone with] celluloid, various kinds of wood and hard rubber strips, but nothing has yet been found so good as the whalebone or the horn.’ (A Complete Dictionary of Dry Goods, 1892) Clumsy substitutes for whalebone’ are ‘steel, reed, and imitation bone.’ (Every Woman’s Encyclopaedia, 1910-2)

Featherbone was a substitute for whalebone in the Edwardian era. Featherbone was made from the quills of feathers and was more pliable than whalebone. Therefore it was used less for corsets and more for dress bodices, for belts and as collar supports.

‘Featherbone. A substitute for whalebone, made from the quills of domestic fowls; patented in 1882. The quills are slit into strips which are twisted, the resultant cords being wrapped together with fine threads and pressed flat. […] it has wonderful elasticity, strength and durability’ (A Complete Dictionary of Dry Goods, 1892).

Horn was another substitute for whalebone. Like whalebone, it could be shaped with heat and moisture. I’m really curious to make a corset with horn corset boning – it’s on my sewing list! If only horn, that is long enough as corset boning, wasn’t so expensive! 😉

‘The principal substitute for whalebone is horn. This is chiefly manufactured in France from South American horns, and the stuff is imported cut into narrow strips ready for use. […] nothing has yet been found so good as the whalebone or the horn.’ (A Complete Dictionary of Dry Goods, 1892)

The horns […] of the ox […] are readily separated into layers. […] The first step in the treatment of horn is to separate the bony core. For this purpose it is macerated several weeks in water […] so that the core will fall out. […] The solid tip of the horn is sawn off […] The remainder, either cut into short lengths or entire, is softened by immersion in boiling water, and then by heating in the flame of a fire nearly to the temperature of melted lead.

The pieces […] are then split open with a sharp-pointed knife, and spread out flat. A solid block of iron with a conical hole, and an iron plug to fit it, are also used to open horns without endangering the scorching of them. Both being heated to the right temperature, the horn slit with a knife is inserted in the hole, and the plug driven into the horn with a mallet. In a minute it is sufficiently softened to be easily opened.

The pieces, now called flats, are laid between boards, or between heated iron plates, and subjected to pressure. The amount of this for general purposes, as for combs, is moderate, for much pressure tends to make the horn split into thin laminae. But if thin plates are to be made, such as are used for lanterns, a heavy pressure is required, and if the horn is light-colored this increases its transparency.

Such plates, when separated, are scraped with a wiry-edged knife till sufficiently thin, and are then rubbed with a woollen cloth dipped in charcoal dust and water, then with rotten stone, and lastly polished with horn shavings. The horn may be dyed by boiling it in infusions of various colored ingredients.’ (The American Cyclopaedia, 1873)

Reed and pliable wood like hazel and willow was sometimes used in 18th century stays. But both could break so it was only used as cheap substitute for real baleen.

And in the Regency and Victorian era before the invention of corset busks, wood like oak was often used for the busk on the front of the corset. 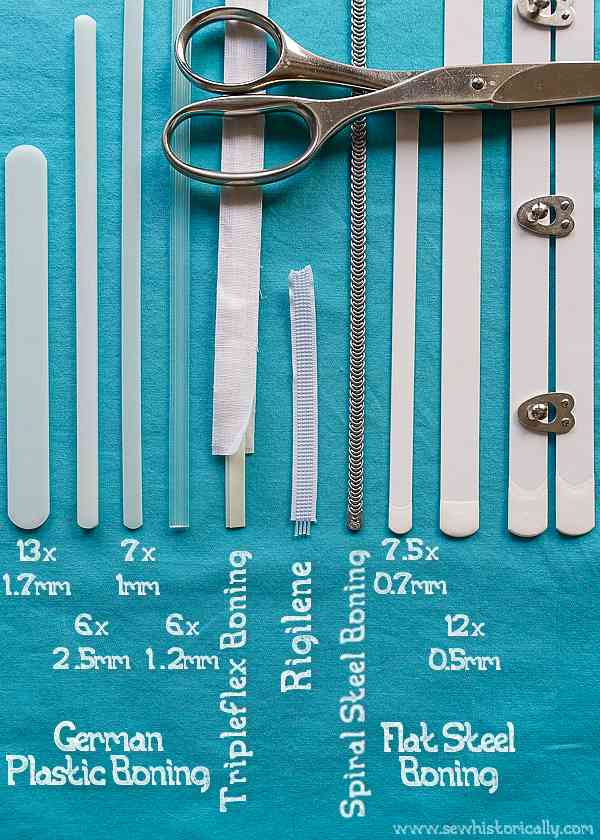 I often use German plastic boning for my historical corsets because it’s the best substitute for real whalebone. I try to use as little plastic as possible in everyday life because of the environment but there just is no better substitute for whalebone. Synthetic whalebone is flexible enough to curve around the body and at the same time stiff enough to shape the body. German plastic boning comes in different widths and thicknesses. The wider and thicker it is, the stiffer it is.

German plastic boning is especially suited for 18th century stays, Victorian corsets and the sides and back of Edwardian corsets.

An advantage of German plastic boning is that you can cut the ends round with scissors and that you can mold or flatten it with an iron.

It usually comes with a fabric cover which I always remove before I use it. I use this kind of plastic boning mainly for Edwardian belts.

Depending on the width and thickness, flat steel boning is stiffer or as stiff as German plastic boning. I use it especially for the front of Edwardian straight-front corsets.

‘Formerly corsets depended for their stiffness entirely upon whalebone, but when gas and coal oil destroyed the whale fishery and whalebone grew scarce and expensive, steel was introduced and substituted for whalebone. This was good for the fronts, but has never been available for the small bones at the sides.’ (A Complete Dictionary of Dry Goods, 1892)

If you can find it, flat stainless steel boning (not spiral steel boning!) is even more stiff than spring steel boning. In addition, it doesn’t rust. It’s perfect for the front of Edwardian corsets but it’s usually not easy to find.

Other Types Of Corset Stiffening

Even if cording isn’t really corset boning, cording was also often used to stiffen corsets in the past. And even if corded corsets aren’t my favorite because they always wrinkle I’ve already made a Victorian corded corset and an Edwardian corded health corset.

Stays of Victorian and Edwardian peasant woman were often unboned or only lightly boned. If you use sturdy fabric like felted wool broadcloth or denim you can often skip the corset boning.

Related: How To Make DIY Buckram For Millinery & Historical Clothing

My Victorian working woman wool stays are unboned and really comfortable to wear. 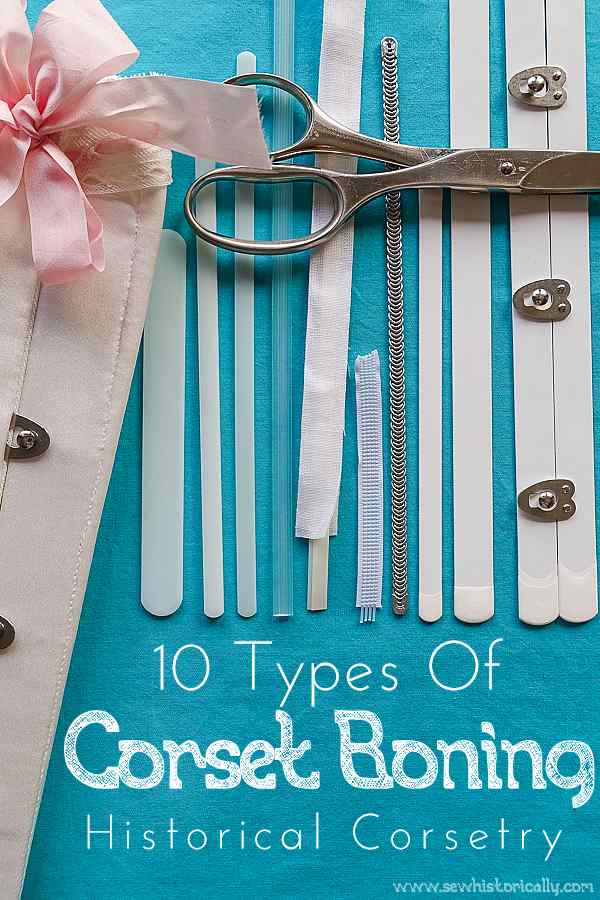